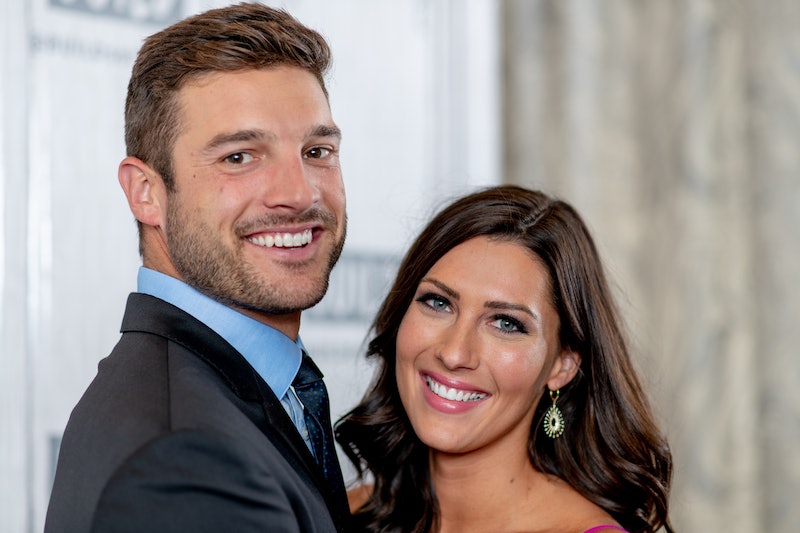 Becca and Garrett may have fallen in love on national television, but that doesn't mean the former Bachelorette is willing to put up with constant criticism about their relationship. Becca Kufrin fired back at comments about her relationship with Garrett after several users critiqued her and her fiancé on Instagram. On Monday, July 20, Becca shared a photo of herself holding her baby niece at a vineyard in her home state of Wisconsin. While most of the comments — including one from Garrett himself — focused on the pair's matching outfits, several Instagram users wrote that they were "disappointed" in Becca and her relationship.

"Some girls just self-destruct in relationships ...." one user wrote, to which the Bachelor Happy Hour co-host responded, "OMG please write an advice book for all of us girls who can't handle ourselves in our own relationships!" She sarcastically added, "We definitely need a man to tell us how to act," along with a hand-in-face emoji. Meanwhile, when another commenter wrote that they were "SO disappointed in you," seemingly alluding to her personal life, Becca fired back once more. "I’m SO sorry that by me spending an afternoon with my niece makes you upset," she wrote.

The critiques come about a month after the couple found themselves in the middle of controversy after Garrett shared a lengthy Instagram post defending police officers in the midst of nationwide protests supporting the Black Lives Matter movement. His post earned him a great deal of backlash, specifically from Becca's friend and former Bachelor costar Bekah Martinez and her podcast co-host, Rachel Lindsay.

At the time, Becca — who supported the Black Lives Matter movement and protests on social media — wrote on her Instagram Story that there are "many conversations being had between friends, family members, Garrett and podcast crew alike" about the ongoing situation and Garrett's post. "Just because I'm silent on my IG right now doesn't mean I'm silent in my life." In the month since, Becca has hinted that their differing values has caused some tension in their relationship, though she has also received criticism for not breaking up with Garrett.

On June 9, she publicly defended her fiancé during a conversation with Rachel about the Black Lives Matter movement on Bachelor Happy Hour. “Garrett is my fiancé and I love him and to his core, I believe that he is a good person. What he posted … I don’t align with and I don’t agree with," she explained. “I don’t think he meant it in a malicious way. I do think it was tone deaf and it was the wrong time and message and sentiment. … I’m trying to get him to see the bigger picture."

A week later, she admitted on the June 17 episode of Bachelor Happy Hour that the whole situation had Becca questioning her future with Garrett. "For those who are curious about my relationship with Garrett at this point, all I can say right now is I don’t know,” Becca explained. "I can’t give anything more than that. It’s something that we are trying to work through and discuss and do work on at home at this time and that’s where the work will remain and that’s really the best can give you at this point." In the meantime, it seems like Becca wants to figure out what the future holds for her and Garrett without input from everyone else.