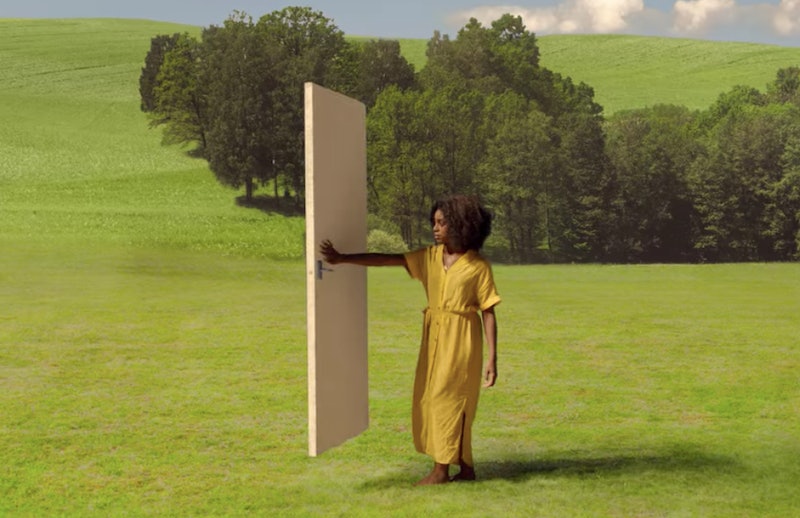 Spoilers ahead for Behind Her Eyes series one. Netflix's creepy new psychological thriller Behind Her Eyes will have you questioning everything. The show focuses on Louise, a divorcee who begins an affair psychiatrist David while also developing a friendship with his wife Adele. However, Behind Her Eyes is far from just a story about a broken marriage, and spins a sinister, creepy AF web involving night terrors, drug abuse, astral projection, and murder. For those who have finished the series, you'll know Louise's night terrors are pretty central to the Behind Her Eyes plot, but what are the doors all about?

As it goes, three of Behind Her Eyes' main characters are plagued by intense and vivid night terrors, which often causes Louise (played by Simona Brown) to sleepwalk. The dreams intensify as the series progresses, and the dreamscapes see Louise moving through a dingy hallway as her son Adam runs away, scared. There are screams, panicked stares, terrified running, and doors. But these are no ordinary doors. As we soon learn, these doors are actually gateways to astral projection, a huge part of the show's explosive ending.

But how exactly do the doors work? Well, here's where things get complicated. Brace yourself.

As Louise enters a friendship with Adele (despite the fact she's having a pretty steamy affair with her husband), the two bond over the fact that they both suffer from night terrors. However, Adele (Eve Hewson) learned to control her lucid dreams during a stint in a psychiatric facility after the tragic death of her parents more than a decade ago. Adele's lucid dreams developed into astral projection (yup, switching bodies), a skill she taught to Rob, her friend at the psychiatric ward.

As you may have guessed, he also suffered from night terrors and he catches on to the whole astral projection thing pretty quickly — and, after he disappears, you'll ask yourself what the hell actually happened to Rob? The answer is wild.

Anyway, I know what you're thinking, how do the doors come into all of this?

Well, as it turns out, you can only project yourself to places you have been before, as Adele says "you can only travel to places you know." During a lucid dream, you must vividly imagine the details of the space and walk through doors as and when they appear.

In the present day, Adele gives Louise Rob's diary as a way to help her cope with her night terrors and Louise comes to learn all how to astral project also. So yes, more doors. This ability also has terrible consequences.

Now, between all the flashbacks of Adele in the ward, the affair, the lucid dreams, and astral projection comes Behind Her Eyes' corker of an ending — an absolute bizarre conclusion that sparked the hashtag #WTFThatEnding on Twitter.

I won't spoil it but the Behind Her Eyes murderous what-the-hell-was-that plot may cause a few sleepless nights for viewers too...

More like this
Everything To Know About The 'Daisy Jones & The Six' TV Series
By Maxine Harrison and Brad Witter
'Brookside' Is Coming Back & Soap Opera Fans Are Going Wild
By Sam Ramsden
'Magpie Murders' S2 Will Include A *Major* Shake-Up
By Sophie McEvoy
Yes, 'The Price Of Glee' Is Available To Watch In The UK
By Catharina Cheung
Get The Very Best Of Bustle/UK
Sign up for Bustle UK's twice-weekly newsletter, featuring the latest must-watch TV, moving personal stories, and expert advice on the hottest viral buys.