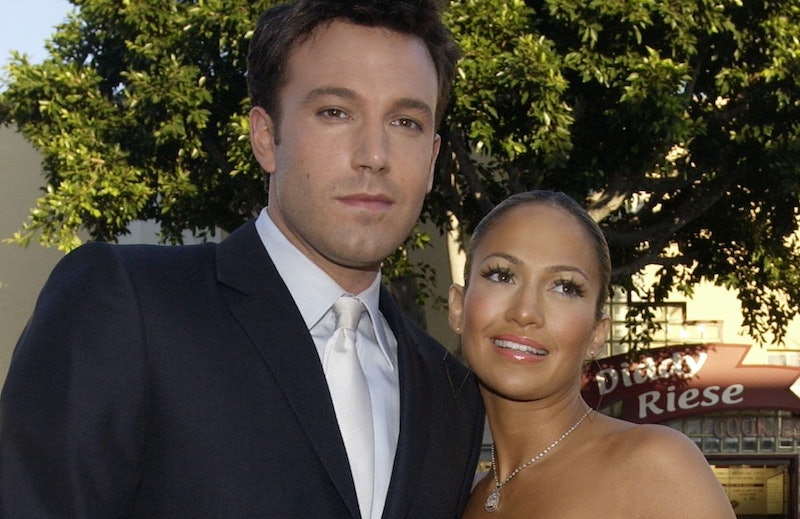 Bennifer historians, rejoice: Ben Affleck has opened an early 2000s time vault to provide insight into one of his most famous relationships. The year is 2002 and Affleck is dating Jennifer Lopez. Together, they are referred to as Bennifer. And while the relationship is now revered as a cornerstone moment in pop culture history, things weren't quite as rosy back then. During a Jan. 14 interview on The Hollywood Reporter's Awards Chatter podcast, Affleck reflected on the "vicious sh*t" that J.Lo endured from the tabloids while they were dating.

When the wide-ranging interview turned to the topic of their romance, Affleck recounted the negativity hurled at the singer over the course of their relationship. "People were so f*cking mean about her — sexist, racist," Affleck said. "Ugly, vicious sh*t was written about her in ways that if you wrote it now, you would literally be fired for saying those things you said." He added that today, Lopez is "lionized and respected for the work she did, where she came from, what she accomplished" — and frankly, she “f*cking should be!”

Affleck continued to sing J.Lo's praises. "I would say you have a better shot — coming from the Bronx — of ending up as like [Justice Sonia] Sotomayor on the Supreme Court than you do of having Jennifer Lopez's career and being who she is at 50 years old today." Of the intense tabloid interest at the time, the actor added, "There's always a story of the month, and me dating Jennifer Lopez happened to be that tabloid story at the time when that business grew exponentially."

Affleck and Lopez, who met on the set of the rom-com crime film Gigli, started dating in 2002. After two years and a whirlwind engagement, the former couple split in January 2004. While they were together, Affleck starred in Lopez's 2002 "Jenny From the Block" music video. The former flames also starred in a second film together, 2004's romance drama Jersey Girl.

Both stars have been vocal about the tabloid scrutiny they endured. In 2008, Affleck thought back on how the media attention impacted their relationship while on the British TV show Live. "I think Jen and I made a mistake in that we fell in love, we were excited and maybe too accessible," he said. "I don’t think either of us anticipated the degree to which it would take on a world of its own."

In a cover interview with InStyle in 2018, Lopez similarly reflected on the weight of it all and compared the experience to her relationship with her current fiancé, baseball player Alex Rodriguez. "It was actually worse then," Lopez said of the tabloid frenzy. "It was just crazy. Now at least I can show you who I am a little bit." She added, "Back then you just believed anything you read on the cover of a tabloid."

More like this
Everything You Need To Know About Kanye's Post-Kardashian Dating Life
By Bustle Editors
Shakira’s Record-Breaking New Song Takes Direct Aim At Her Ex Gerard Piqué
By El Hunt
All The Clues Clint & Gina Aren’t Still Together After 'MAFS' Season 16
By Brad Witter
Mack & Domynique Reportedly Had An "Epic" Breakup On 'Married At First Sight'
By Brad Witter
Get Even More From Bustle — Sign Up For The Newsletter
From hair trends to relationship advice, our daily newsletter has everything you need to sound like a person who’s on TikTok, even if you aren’t.