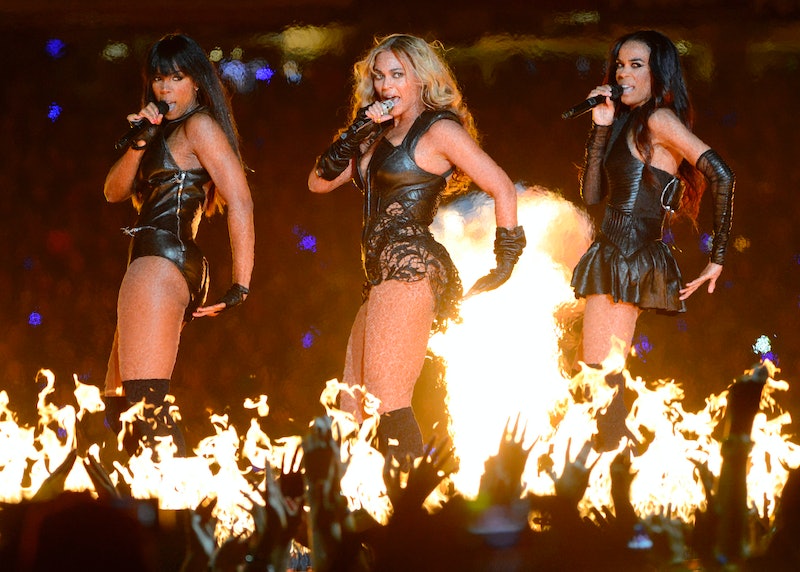 There may be an actual football game taking place at the Super Bowl, but there’s arguably an even bigger reason to tune in: the coveted halftime show. Since the first performance in 1967, halftime sets have snowballed into a must-see event, sometimes earning even higher ratings than the football portion of the night. In 1991, so many viewers tuned in to watch New Kids on the Block that rival networks began running counter-programming. The NFL upped the ante after a live In Living Color episode caused a noticeable decline in halftime show viewership the following year, prompting them to begin producing the large-scale spectacles we know today.

In the ensuing decades, some of music’s biggest names have taken the stage — and pulled off plenty of memorable performances. Here are 10 most talked about halftime show moments so far.

With a staggering 100 million viewers tuned in, Michael Jackson began his January 1993 performance by standing silently on the stage for roughly two full minutes. The crowd at Pasadena, California’s Rose Bowl didn’t exactly follow suit, intensifying their cheers as the anticipation built. Finally, he dove into a medley of his greatest hits including “Billie Jean” and “Black or White” before concluding with a mashup of “We Are the World” and “Heal the World” assisted by a children’s choir.

Prince began his 2007 Miami halftime set with a mix of covers and originals, including “We Will Rock You,” “Baby I’m a Star,” and “Proud Mary.” Though his flawless execution would have made for a classic Super Bowl performance on its own, it was set over the edge by a moment so perfect it could have been scripted. As he sang his 1984 hit “Purple Rain,” actual rain started falling from the sky. To top it all off, he nailed a mid-song guitar solo with only his backlit silhouette visible from behind a curtain, resulting in what many believed to be a phallic image or “shadow malfunction.”

As if Beyoncé’s nine-song medley — complete with a firework-shooting guitar — wasn’t enough to wow audiences in 2013, the 28-time Grammy winner also pulled off a surprise reunion with her former Destiny’s Child bandmates, Kelly Rowland and Michelle Williams. After the trio performed “Independent Women Part I” and “Single Ladies (Put a Ring on It)” amid a fiery backdrop, New Orleans’ Mercedes-Benz Superdome lost power. The game’s second half was delayed, but officials insisted that Beyoncé didn’t cause the blackout.

Nearly two decades after it happened, people are still discussing the events that led to “nipplegate” at the 2004 Super Bowl. While singing the line “gonna have you naked by the end of this song” from his song “Rock Your Body,” Justin Timberlake ripped off a piece of Janet Jackson’s bodice, exposing her right breast for a half-second. Timberlake repeatedly insisted that it was an accident, but many believed it was a planned stunt, and the Federal Communications Commission ultimately fined CBS $550,000. Jackson bore the brunt of the public fallout, and Timberlake returned to headline the halftime show in 2018.

Setting the record for the most-watched halftime show ever, Katy Perry’s 2015 performance at Glendale, Arizona’s University of Phoenix Stadium attracted an impressive 118.5 million viewers. Her set featured everything from a giant metallic lion and robotic shooting star to cameos from special guests Lenny Kravitz and Missy Elliott, but her costumed backup dancer — later dubbed “Left Shark” — stole the show with his seemingly unrehearsed dance moves. The shark, aka Bryan Gaw, later told NPR that when he got onstage, he simply chose to freestyle and “play a different character.”

To begin her 2017 halftime show, Lady Gaga performed a pre-recorded medley of “God Bless America'“ and “This Land Is Your Land” while surrounded by hundreds of aerial drones in an American flag pattern, then appeared to jump from the roof of Houston’s NRG Stadium. In real life, the 12-time Grammy winner was lowered by wires to the stage where she sang and danced her way through chart-toppers like “Poker Face,” “Just Dance,” and “Bad Romance.” She ended her high-energy medley by taking an actual leap off a set of risers to catch a football in midair.

Jennifer Lopez and Shakira’s co-headlining turn in 2020 yielded more than 1,000 FCC complaints for what some called “indecent, sexual, and risqué content.” One such moment featured Lopez pole-dancing atop an Empire State Building replica as a nod to her Hustlers role. Other viral moments included Shakira’s zaghrouta heard ‘round the world, as well as a political statement from Lopez. While wearing a half-American, half-Puerto Rican flag cape, the singer featured children in lit-up cages scattered around the field as she and her daughter Emme Muñiz sang “Born in the USA” and “Let’s Get Loud” — a clear commentary on America’s broken immigration system.

Bruce Springsteen brought the “righteous and mighty power of the E Street Band” into homes across the country in 2009, encouraging families to “step back from the guacamole dip,” “put the chicken fingers down,” and turn their TVs “all the way up.” The rocker followed with renditions of hits including “Born to Run” and “Glory Days,” but the performance will perhaps most be remembered for Springsteen’s viral stage-slide that sent his crotch straight into a camera.

Headlining the first Super Bowl to take place after the September 11 attacks, U2 paid tribute to those who lost their lives on that tragic day. While the Irish rockers played songs including “Beautiful Day,” “MLK,” and “Where the Streets Have No Name” at Louisiana’s Superdome, they displayed a banner with the names of those who died. To cap off the set, lead singer Bono proudly opened his jacket to reveal an American flag.

More like this
'Breaking Bad' Duo Walt & Jesse Are Back — In This Super Bowl Commercial
By Jake Viswanath
Hilary Duff's Husband Matthew Koma Has Her Name Tattooed On His Butt
By Jake Viswanath and Stephanie Downs
Cruz Beckham Teased New Music With An Adorable Nod To Mom Victoria Beckham
By Stephanie Topacio Long
Twitter Can’t Believe The Madonna Biopic Is Scrapped & Fans Have A Solution
By Alyssa Lapid
Get Even More From Bustle — Sign Up For The Newsletter
From hair trends to relationship advice, our daily newsletter has everything you need to sound like a person who’s on TikTok, even if you aren’t.