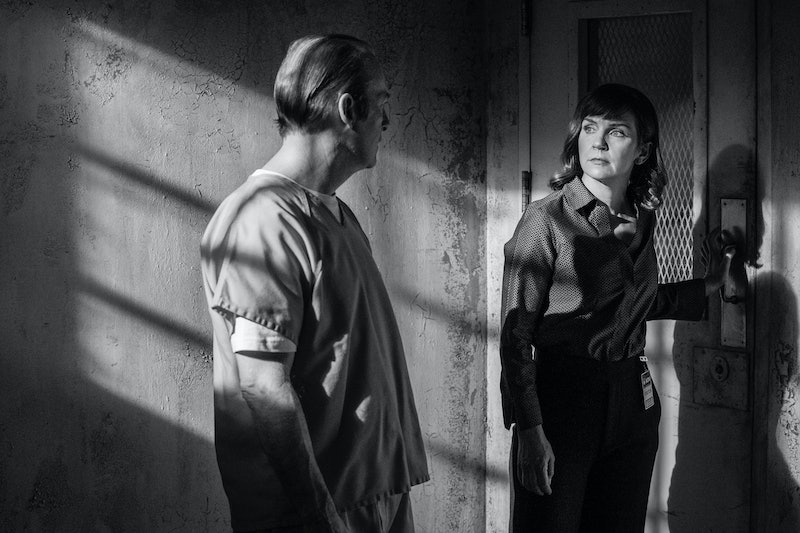 A tip that Jimmy/Saul/Gene (Bob Odenkirk) had been caught and intended to negotiate a lesser sentence by implicating her in his crimes sent Kim (Rhea Seehorn) back for his trial. In fact, Jimmy had negotiated a deal for him under which he would serve just seven years in a cushy minimum-security facility. After learning that Kim confessed to her role in Howard’s (Patrick Fabian) death, he threw the deal out the window, implicating himself and taking responsibility for his crimes — including those relating to Walter White’s (Bryan Cranston) drug operation, as well as the deaths of Howard and Chuck (Michael McKean) — as his former love sat in the courtroom. Jimmy was ultimately sentenced to 86 years in federal prison.

The move to save Kim was partly to redeem himself and win back Kim’s respect and affection, according to Better Call Saul co-creator and showrunner Peter Gould. “Kim’s presence, I think, brings him down to earth and makes him more real,” he explained to TVLine. “I think he’s breaking a cycle. This is a guy who wants to get away with everything. He likes to fool people. He likes to win in conversations. He likes to win in the court. He always wants to win. And I think he’s breaking out of something that we’ve seen him do over and over again.”

Following Jimmy’s confession and sentencing, he and Kim share one last cigarette in a prison interrogation room, a callback to the pilot’s parking garage scene. Though the dialogue was sparse, the duo communicated plenty about their history and lingering connection. Describing the scene as a “happy ending” of sorts, Gould intentionally left their relationship up to interpretation in order to “keep driving the story in your head” now that it has ended.

“Jimmy and Kim are both still alive. They’re both kicking,” he added to TVLine. “He seems to have found a way to survive behind bars, and she certainly seems like she’s headed back into the law. So in a weird way, I think it is a happy ending. In my heart, I always wonder if he’s going to end up serving that entire heavy sentence that’s been given to him. We’ll see.”

Seehorn, for her part, believes that, in spite of everything that’s transpired, Kim “still loves” Jimmy. “And I don’t just mean as a friend. I think that she still deeply loves him,” the actor told Entertainment Weekly, noting that it would take “years for her to unravel” larger questions of whether her knowledge of his criminal activity would stand in the way of a viable romantic relationship.

The final scene of the series showed Jimmy symbolically shooting Kim the finger guns. Separated by two security fences, she simply turned back and looked at him as she walked away — also leaving much up to the imagination. The team shot multiple versions of the scene, including one where Kim shoots finger guns back at him, but Gould decided they didn’t want to give the impression they were signaling to viewers that she was “back in the game.”

Seehorn had her own thoughts. “That moment between them, to me, is much more about the acknowledgement of their bond, that is still there, and the part of their relationship that was true,” she added to EW. “I took it to mean that he was saying, ‘I still believe that we have a relationship.’ In whatever capacity that is.”

The actor goes on to explain how the finger guns represent the beginning of their downfall, but that the way Jimmy does it at the end is different. Seehorn said that “it felt like, ‘There is still something great about us. Not everything about what we were together is bad. There’s something great about the two of us together.’ And I took her look to him to be an acknowledgement that it’s true, even though she’s not ready to say what that means.” While the show may be finished, it seems like whatever is between Jimmy and Kim are far from over.

More like this
If 'Entergalactic' Season 2 Happens, You Could Get A New Kid Cudi Album
By Kadin Burnett
Mike Flanagan Teases 'The Midnight Club' In This Exclusive, Creepy Clip
By Grace Wehniainen
Nicola Coughlan Shared A Lady Whistledown Excerpt From ‘Bridgerton’ Season 3
By Grace Wehniainen, Alyssa Lapid and Sam Ramsden
Devi Is Going To Meet A “Smoldering Bad Boy” In ‘Never Have I Ever’ Season 4
By Jack Irvin and Gabrielle Bondi
Get Even More From Bustle — Sign Up For The Newsletter