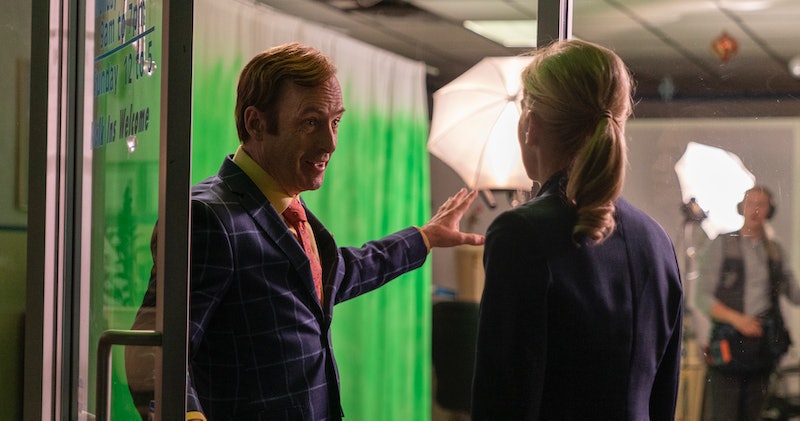 Spoilers ahead for Better Call Saul Season 5. Just as it seemed that Kim was ready to break up with Jimmy, she threw a relationship curveball by suggesting that she and Jimmy get married on Better Call Saul. Despite their feelings for one another, a wedded union doesn't seem like the smartest idea for the couple since Kim admitted she can't trust Jimmy and he couldn't tell her he should. Rather, this marriage proposal is more like a Hail Mary pass. But even if Kim and Jimmy having a wedding is very misguided, her proposition is another clue that Kim's potentially still around in Breaking Bad.

"Wexler v. Goodman" provided a rare glimpse into Kim's past with a flashback to her childhood. She stubbornly but smartly decides to walk home three miles from her junior high school (in Nebraska, no less) with her cello when she discovers her mom has been drinking. Even at a young age, Kim is an unrelenting person with an all-or-nothing mentality and this scene offers some explanation on why she proposed marriage to Jimmy after he betrayed her. "Either we end this now and enjoy the time we had and go our separate ways or ... maybe we get married," she told him.

Jimmy didn't respond to Kim, but it's not like he's opposed to spontaneous, over-the-top displays of affection. Co-creator Vince Gilligan has previously said that Kim is "maybe the most important person in his life and maybe the love of his life," so wedding bells could very well be in the future for these lawyers.

When it comes to evidence of Kim and Jimmy being married in Breaking Bad, nothing solid exists. In the Season 3 episode of Breaking Bad, "Green Light," Saul told Walt, "I caught my second wife screwing my stepdad. OK? It's a cruel world, Walt. Grow up." That implies that Saul has been married at least twice, but Gilligan told Screen Rant that this "goofy throwaway line" from the original series has been difficult for the writers when creating the prequel series.

Jimmy doesn't have a stepfather, so this comment was probably Jimmy in his full-blown Saul persona trying to get Walt to calm down. But Better Call Saul did put in its own reference to Jimmy potentially already having a first wife. In the Season 1 finale of Better Call Saul, Jimmy talks about Chet (the man he gave a Chicago sunroof to) while emceeing a bingo game. "He might have owed me some money. He might have slept with my wife before she became my ex-wife — the details don't matter," Jimmy proclaimed. Again, this is far from proof that Jimmy was married before. Instead, this line may show that Jimmy has a penchant for making up stories about ex-wives when it suits his narrative. Or maybe, he really was married before and Kim will become his second ex-wife by the time of Breaking Bad.

To gain some insight into his Breaking Bad romantic status, you can look at Saul's interactions with his secretary Francesca. In Saul's first Breaking Bad episode, "Better Call Saul," she rebuffs his unwanted sexual advances. Later, in Season 4, Saul again sexually harasses Francesca what he calls her "honey tits," or "HT" for short.

When Saul and Francesca first appeared on Breaking Bad, the creators had no idea that Saul would have a spinoff show. Knowing what we know about Jimmy now, his inappropriate behavior toward his employee is, again, probably part of his Saul schtick. But if that's the case, the writers will need to explain why Saul said, "God, you are killing me with that booty," about Francesca when no one else was around in "Better Call Saul." Was he working overtime trying to sell his Saul persona? Or was he harassing Francesca following a divorce from Kim?

If Kim and Jimmy get married now, a divorce doesn't seem like the likely outcome since they already know the worst parts about each other. Rather, all of Saul's comments about ex-wives could be part of his act. Yet, even with the impending bond of marriage, that still doesn't guarantee Kim and Jimmy are together in Breaking Bad. But it's sure providing more hope ... or, more devastation if something tragic were to befall Jimmy McGill's beloved wife Kim Wexler.

More like this
Nicole & Chris Hinted They’re Still Together After 'Married At First Sight'
By Brad Witter
Shonda Rhimes Responded To The Surprise Exit Of A Day 1 'Grey's Anatomy' Figure
By Grace Wehniainen
Everything To Know About A Potential 'Lockwood & Co.' Season 2
By Gretchen Smail
This 'Gossip Girl' Wardrobe Error Has Gone Viral On TikTok
By Alyssa Lapid
Get Even More From Bustle — Sign Up For The Newsletter
From hair trends to relationship advice, our daily newsletter has everything you need to sound like a person who’s on TikTok, even if you aren’t.