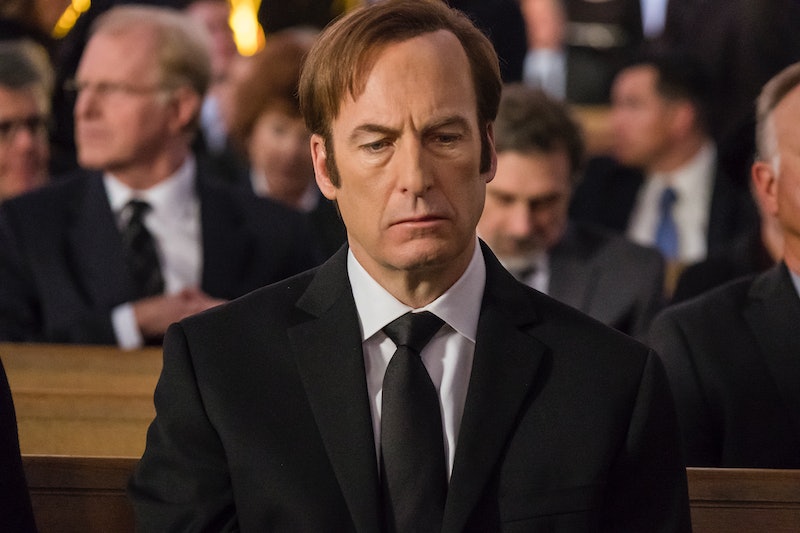 Spoilers for the Season 4 premiere of Better Call Saul follow. Jimmy is stoic when he finds out about Chuck's death, when he hears Chuck's obituary, and even when he attends the funeral. But in the final moments of "Smoke," Jimmy's response to Chuck's death on Better Call Saul turns sinister. Howard reveals that he thinks Chuck intentionally started the fire that killed him and that Howard kicking Chuck out of the law firm was the reason for it. Howard is utterly guilt-ridden and vulnerable, but this information comes to Jimmy as some sort of joyful relief. And even though it's not completely clear which part of Howard's confession makes Jimmy so gleeful, the dark elements of his personality that will eventually manifest into Saul have come to the forefront.

At the end of Season 3, Jimmy had taken some serious strides to becoming a more moral person. He ruined his relationship with the Sandpiper community (and lost a major account) in order to mend the friendships he had destroyed. He supported Kim after her car accident. And he apologized to his brother Chuck for his actions at the bar hearing. But the way he responds to Howard's news may indicate the end to any forward progress from Jimmy McGill.

Perhaps Chuck's final words to him, "Why have regrets at all?" are ringing in Jimmy's ears when Howard says he blames himself for Chuck's suicide. But Jimmy's response of, "Well, Howard. I guess that's your cross to bear" is extremely cruel. Even Kim is taken aback by his tone. He then goes to feed his fish with a smile and whistles a little tune as he makes more coffee. While Howard sits shocked and hurt, Kim is clearly disturbed by this drastic shift in Jimmy's behavior.

Jimmy and Howard have never had a great relationship, so he may relish the other man being upset. But there's another aspect that makes Jimmy's actions even crueler. Jimmy is the one who intentionally told the insurance company about Chuck's mental health condition. He did this in retaliation since Chuck's attempts to have Jimmy disbarred led to Jimmy's law license being suspended. The insurance company then wanted to raise HHM's premiums and Howard forced Chuck out of the law firm with his own money. Howard doesn't know that Jimmy is the one who told the insurance company about Chuck's mental breakdown at his bar hearing. And it sure doesn't seem like Jimmy is going to offer that information to Howard to ease his conscience. Instead, Jimmy seems pretty delighted by the outcome.

Then, there's the revelation that Chuck may have committed suicide. While Chuck was cruel and gave Jimmy a lot of grief, it's still a blow to see Bob Odenkirk's character respond so callously to the idea that his brother intentionally killed himself. While neither Jimmy nor Howard should blame themselves for Chuck taking his own life, there might have been a point where Jimmy would be hurt to know that his actions led to his brother's mental health deteriorating again. But the Jimmy McGill that he is now has no such regrets.

Before the premiere, Better Call Saul showrunner Peter Gould teased to Entertainment Weekly that Jimmy's reaction to Chuck's death would be slightly surprising. "I have to say: Jimmy's reaction to Chuck's death was maybe the most difficult thing we had to figure out this season," Gould said. "I don't think it's going to be what the audience is expecting. Not exactly. It is interesting and opens up a really different view in Jimmy McGill, and also into the man who will become Saul Goodman."

It's inevitable that Jimmy will become Saul from Breaking Bad. And the previews for Better Call Saul Season 4 clearly indicated that this evolution would be happening sooner rather than later. But Jimmy smiling about Chuck's suicide sets a particularly ominous tone for Season 4 — and for the fate of Jimmy McGill.