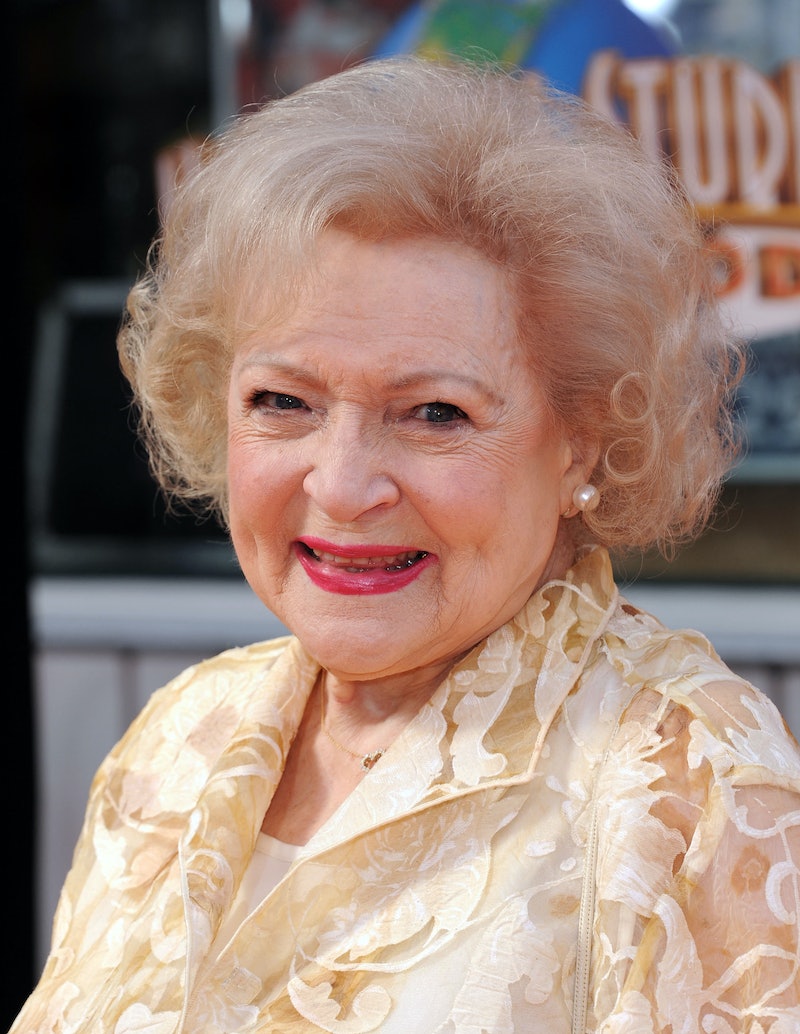 It’s been roughly three weeks since Betty White died, but the Golden Girls star is still making an enormous impact. On Monday, Jan. 17, which would have been White’s 100th birthday, fans honored her legacy by donating $5 each to animal rights groups for what has been dubbed the #BettyWhiteChallenge. The challenge was a massive success, with hundreds of thousands of dollars raised for shelters, zoos, and animal rights organizations across the country.

Tom Jacobson, the president of the Los Angeles Zoo, told the Wall Street Journal on Wednesday, Jan. 19, that he was “blown away” by the amount of money raised. The zoo, where White was a board member, reportedly received nearly $95K since the challenge was created by fans on New Year’s Eve. Per WSJ, the donations came from a total of 49 states and 11 countries, but it’s worth noting that the L.A. Zoo wasn’t the only organization to reap the benefits of the viral hashtag.

American Humane, where White also served on the board, reported that the #BettyWhiteChallenge quadrupled the donations they received in the last three weeks. “There could be no more perfect time and way to honor the legacy of Betty White,” a spokesperson for the organization told WSJ. The paper also reported that the Mohawk Hudson Humane Society of New York raised “$52K and counting.” “For a single fundraising event, especially because it was done through social media, this is huge,” CEO Ashley Jeffrey Bouck said.

Down south, the Nashville Humane Association reportedly received over $50,000 as of Jan. 18, according to The Tennessean. That same day, Wilson County’s New Leash On Life Pet Adoption Center reported more than $20,900 raised by 430 donors. “You know how social media can sometimes be a bit of a downer, well yesterday it was so positive,” NHA spokesperson Keith Tallier said. “I know in my news feed everyone was donating, whether it was to the Nashville Humane Association or other local rescues here in TN. I can’t wait to find out what the national and world totals are in honor of this woman.”

While it remains unclear exactly how much money was raised in total, what is clear is that many organizations saw a significant increase in financial gifts over the last several days and weeks. Three Atlanta animal shelters — Furkids, Mostly Mutts Animal Rescue, and Pound Puppies ‘N Kittens — reported raising more than $68,000, according to 11 Alive. “We really appreciate the community’s support,” said Samantha Shelton, CEO and founder of Furkids, the biggest no-kill shelter in Atlanta. “It’s a great way to honor a great lady who had such a big voice for the homeless and the voiceless.”

Country star Trisha Yearwood, who created Dottie’s Yard Fund to help raise money for animal charities, took to Twitter on Jan. 17 to reveal how much they raised. “I’m blown away!” she wrote. “We’ve already reached our goal of $30,000+ but let’s keep the love flowing!! Thank you all so much!!” And that’s not all. According to Fox 2 Detroit, Michigan Humane received $30,000 in donations on Dec. 17 after receiving only $500 on that same day last year. Detroit Dog Rescue reported raising $20,000 in one week. They are now planning on naming part of the shelter after The Proposal actor.

“We are standing in the new Betty White Adoption Avenue,” Detroit Dog Rescue’s Christina Rinaldi said. “When a dog leaves the new DDR shelter the Golden Girls theme is going to play now — so similar to when you're in a hospital, you hear a lullaby, someone has just had a baby — when you hear the Golden Girls theme, you know that a dog is leaving Detroit Dog Rescue. Thank them for being a friend and wish them well.”

The shelters, zoos, and rescues mentioned above are just some of the organizations that raised thousands of dollars from the #BettyWhiteChallenge. And considering how much White loved animals, it was the perfect way to honor her life and legacy. In an op-ed for Chicago Tribune, she once wrote, “Animals don’t lie. Animals don’t criticize. If animals have moody days, they handle them better than humans do.” She was also quoted saying that animals are “near and dear” to her heart and that she’s devoted her life to improving their lives. Thank you for being a friend, Betty.