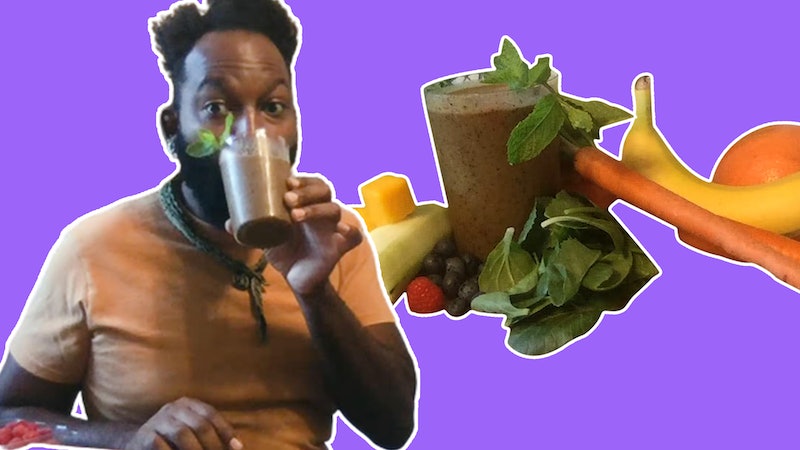 Building a business from scratch, designing absolutely wild floral arrangements for Beyoncé, managing a social media platform with hundreds of thousands of followers, or just making a smoothie: no matter what Maurice Harris is doing, he's doing it big. The Black Is King floral designer is well-versed in taking things to the next level; he's been doing it his entire life.

A recent Los Angeles Times profile on Harris described a photo one of his family members sent him from when he was about 5 years old and nicknamed "Man" for being a little adult. "I had on my suit. I have my sunglasses. I look like, 'Bitch, you can’t tell me nothing.' I just look so bomb," he told the Times. "I’ve always been this kind of larger-than-life person."

It's Harris' expansive attitude and charisma that's led him to have such a storied career. After starting his own business in 2010, a floral shop called Bloom & Plume in Los Angeles, he managed to grow it into something more than just a place that sells flowers — it's since expanded into a cafe and a place to host community events like meditation and finance workshops. His presence in the community and focus on Black artists and creators got the attention of Beyoncé, who hired Harris to do all the floral design for her visual album Black Is King.

Harris' career is definitely one for the books (and he's just getting started), but sometimes, he's just a guy making a smoothie in his kitchen. Don't worry, though: Even his smoothie process is extra. His favorite recipe is called a "Kitchen Sink Smoothie," which combines a ton of different things from your fridge and freezer to make a smoothie he says is delicious, nutritious, and just the right amount of sweet. Check out the video above to see how it's done.