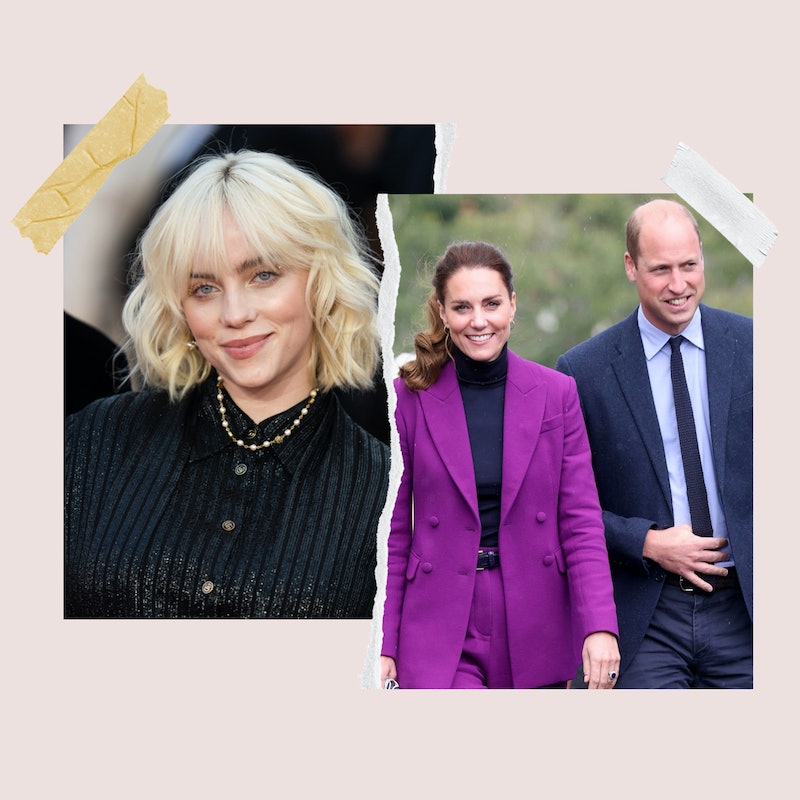 Billie Eilish has broken royal protocol. On Wednesday, Oct. 13, the “Therefore I Am” singer appeared on Jimmy Kimmel Live to chat about her latest album, Happier Than Ever, and the theme song she wrote for the new Bond movie, No Time To Die. While she was there, the 19-year-old Grammy winner also spoke candidly about what it was like meeting the royal family for the first time last month.

“I assume they read you the rules and all that stuff before you met them?” Kimmel asked the pop star of the meeting, which took place in London on Sept. 28. In response, Eilish said that “there was a whole list of things” she had to know before meeting Kate Middleton, Prince William, Prince Charles, and Camilla, the Duchess of Cornwall. Unfortunately, when asked if she paid attention to any of it, the “Bad Guy” singer had bad news.

“No,” Eilish answered honestly. “But I tried to. I was planning on it and they were just so normal. They didn’t make me feel like, ‘Oh, I’m scared I can’t talk to them.’ They were very complimentary and they had all these questions for me.” The singer added that the royals were “very friendly and funny and sweet.” “I don’t know, I can’t complain,” she said. “It was amazing.”

Eilish, it seems, tends to break rules. Later on in the interview, Kimmel presented the singer with an old photo of her singing in the choir, which was included in the self-titled book that she released about her life earlier this year. In the picture, the musician was the only student in the choir with colorful hair. She also opted out of wearing her school uniform and chose a bright yellow shirt instead.

“Rule following is not your thing, I guess,” Kimmel joked. Eilish agreed, adding that she “did many things like that” when she was in the choir. “I was the only person with colored hair in the choir, too,” she said. “I mean, they did not like me over there.” In response, the host pointed out that while Eilish may have been the only one who dyed her hair eclectic colors, she’s also probably the only one in the photo who received a Grammy.

While Eilish isn’t afraid to switch up her hair, there are some other risks that she’s not quite willing to take. For example, following William Shatner’s recent flight into space, the singer made it crystal clear that she has no interest in ever going. “I would literally rather do anything else,” she said. “I hate the idea.”

Funny enough, Eilish was offered the opportunity to not only go to outer space, but to perform there. “Somebody asked me once,” she revealed. “We got an email from a girl that I used to know’s mom and her mom was like, ‘Would Billie want to go in space and sing? And I was like, ‘No. Literally never.’”