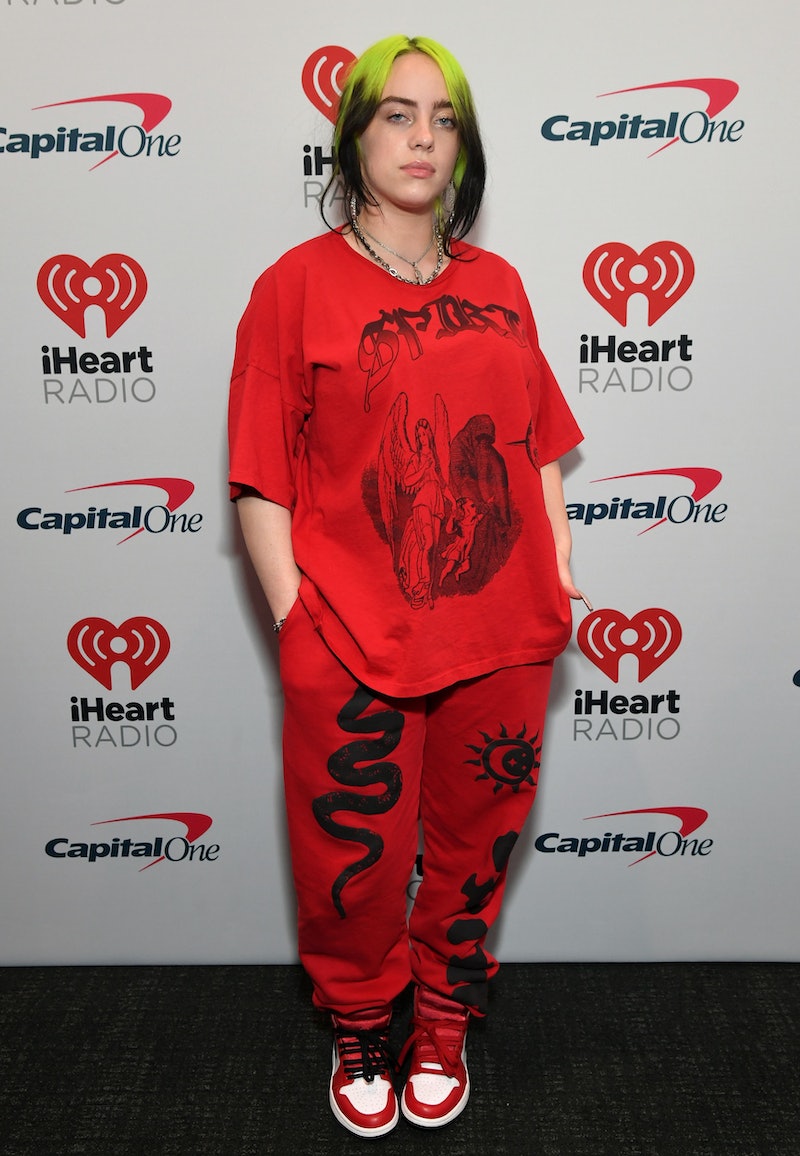 Ahead of the Feb. 26 release of her AppleTV+ documentary Billie Eilish: The World's A Little Blurry, Billie Eilish appeared on The Late Show With Stephen Colbert to talk about the making of the film. While the documentary chronicles Eilish's career from the making of her 2019 album When We All Fall Asleep, Where Do We Go? to the 2020 Grammys — where she and her brother Finneas O'Connell took home a total of eleven awards — it's unlikely to include insight into her new music. However, Eilish told Colbert that she's made an entirely new album in quarantine, and based on the details she shared, we hope she releases it ASAP.

Eilish kicked off her Where Do We Go? World Tour on Mar. 9, 2020, and she only got to perform three shows before the tour was shut down by the onset of the COVID-19 pandemic. The 19-year-old musician was sent inside like the rest of us, though at first, the break gave her much-needed rest. “The year has sucked, and if I could go back and change it I would," said Eilish. "But at the same time I’ve gotten more time off than I’ve ever, ever had, and of course I think that goes for everyone, but that was true for me after two weeks of it."

Detailing that it was the most time she's had off "in like four years," the singer then revealed that she made a unique new album in quarantine. "I just don’t think I would have made the same album, or even the album at all, if it weren’t for COVID. That doesn’t mean it’s about COVID at all, it’s just that, when things are different in your life, you’re different. That’s just how it is. So, I have to thank Covid for that, and that’s about it,” she said with a laugh.

Colbert said that after watching the documentary and listening to her music, he wonders why Eilish sings so softly in her songs. "You have a beautiful voice. You sound like if you wanted to, you could burn the room down," he said. "Are you ever going to belt for us?"

Noting that she "definitely could," Eilish hints that listeners could hear some powerhouse vocals in her new music. "There's a couple moments on this album. I pull some tricks out," she teased. "It's really just about what I feel like sounds good. It's not like I can't do it." She continued, "You'll get a little bit. It'll come."

Here's to hoping the album doesn't sit on Eilish's hard drive for much longer. We need to hear it!

More like this
Everything To Know About Taylor Swift’s 10th Studio Album, 'Midnights'
By Grace Wehniainen and Jake Viswanath
Mariah Carey Is Releasing Her “Lost” '90s Grunge Album
By El Hunt
Jason Derulo Is Launching A New Singing Show In The UK
By Maxine Harrison
At 28, Sharon Horgan Was Hoping To See Damon Albarn At The Pub
By Samantha Rollins
Get Even More From Bustle — Sign Up For The Newsletter