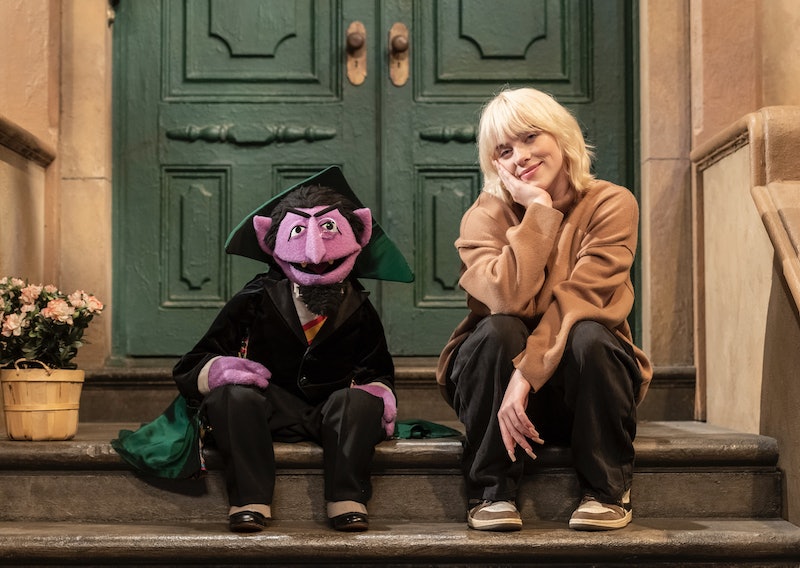 Billie Eilish released her latest album Happier Than Ever not too long ago in July, but she’s already reworked the title track. No, she hasn’t re-released the single with new lyrics or as a remix with other musicians. The 19-year-old Grammy winner put a fun spin on the tune for legendary children’s show Sesame Street. In a new video, released as part of Season 52 of Sesame Street, Eilish performs an updated take on her hit single “Happier Than Ever” with The Count as the two sit on a stoop to talk and sing about how much they love to count.

“When I’m counting with you / I’m happier than ever,” Eilish sings in her signature hushed voice. After her first lines, The Count jumps with, “Numbers sound so much better” in his own accented tone. Throughout the song, Eilish and her new friend only count to two, numbering the pairs of items they see in front of them, such as Bert’s sweaters, the heads on a two-headed monster, and The Count’s own feet, which he then uses to tap dance.

The performance is short and sweet, only lasting a little more than a minute and a half. Those who are familiar with Eilish’s other singles — such as “Bad Guy” and “Bury a Friend” — might be surprised to hear just how well “Happier Than Ever” works as children’s song. And while most of the lyrics have been swapped, the music and melody remain largely the same.

Season 52 of Sesame Street premiered on Nov. 11, and the rest of the season will feature more artists such as Kacey Musgraves, Jon Batiste, and Anderson .Paak. Even after more than 50 seasons on the air, artists are still honored to appear on the program. The list of artists who have performed with Big Bird, Elmo, Bert and Ernie, and the rest of the cast numbers in the hundreds.

“Happier Than Ever” was released as the sixth and most recent single from Eilish’s sophomore album of the same name. The track peaked at No. 11 on the Hot 100.