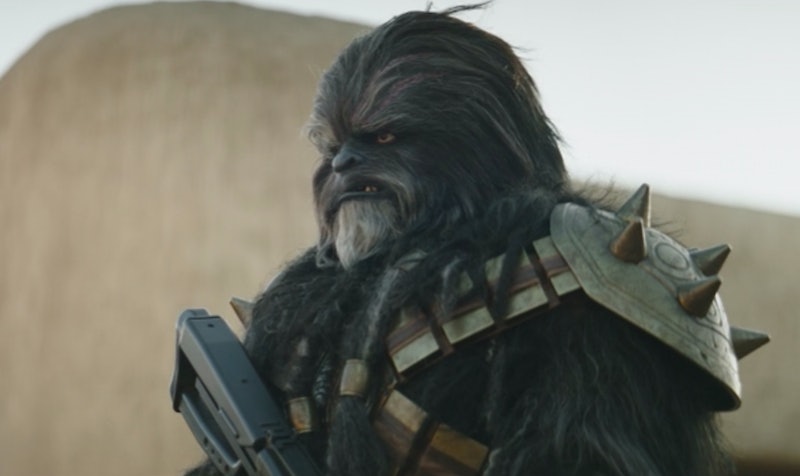 The Wookiees have always been a staple of the Star Wars universe. Initially inspired by George Lucas’ giant dog (which was once mistaken for a human riding in the passenger seat), they’re meant to be similar to man’s best friend: loyal, supportive, and generally pretty cuddly. Though they tower over humans and can have scary mood swings, Wookiees are usually the good guys, with Chewbacca and many others siding with the Rebels against the Empire. But in Episode 2 of Book of Boba Fett, we meet a black Wookiee who is decidedly not of the huggable variety.

Book of Boba Fett’s black Wookiee — or evil Wookiee, if you will — first appears when Jabba the Hutt’s two cousins arrive and announce that the territory still belongs to the Hutt Clan. When Boba refuses to accept this, the Wookiee with black fur steps forward. Decked out in gold armor and carrying a very big rifle, he initially tries to intimidate Boba, but Boba recognizes him immediately. “You can bring as many gladiators as you wish,” Boba announces. “But these are not the death pits of Duur, and I am not a sleeping Trandoshan guard.”

This is a reference to the character’s comic book origins. The black Wookiee’s name is Black Krrsantan, and he was first introduced in 2015's Star Wars #15 as a bounty hunter hired by Jabba the Hutt to hunt down Obi-Wan Kenobi. (Obi-Wan bested him and left him with that signature scar on his face.) After fleeing his homeworld of Kashyyyk, Krrsantan was trained in the gladiator pits, where he learned brutal fighting tactics and became a champion. Thanks to this skillset, he was considered one of Jabba’s best bounty hunters, and was employed by the crime lord at the same time Boba was. The two interacted on occasion, but when Darth Vader came knocking, Jabba loaned out Boba and Krrsantan for separate missions.

The two bounty hunters lost contact after Krrsantan completed his mission for Vader and Boba was seemingly killed in the sarlacc pit. Krrsantan went solo, going on to dominate more gladiator games, carry out heists on behalf of the Empire, and even fight against Chewbacca in Darth Vader #14. At some point, he came to work for The Twins of the Hutt Clan, suggesting he does feel some sort of loyalty to creatures he’s worked with before — he just happens to consistently be on the wrong side.

Undoubtedly, there’s plenty of history between Boba and Krrsantan that the show could explore. The comics also suggest that Krrsantan will be loyal to whoever pays him the most, so it’s possible that Boba could lure him away from his current employer and they could team up again. (Though considering Boba is still pretty bad at this crime lord business and can barely get people to pay him tribute, that may be a far-flung dream.) Alternatively, Krrsantan could just be a lead-in for the upcoming Disney+ show about Obi-Wan.

More like this
'The Last Of Us' Video Game Revealed Tess’ Fate In The HBO Series
By Brad Witter
The Song At The End Of 'The Last Of Us' Ep 1 Has A Deeper Meaning
By Sophie McEvoy
Wait, Is Barney Stinson Related To Sophie On 'HIMYF'?
By Gretchen Smail
'The Queen’s Gambit' Season 2 Tweet Wasn’t From Anya Taylor-Joy
By Mary Kate McGrath, Jack Irvin and Grace Wehniainen
Get Even More From Bustle — Sign Up For The Newsletter
From hair trends to relationship advice, our daily newsletter has everything you need to sound like a person who’s on TikTok, even if you aren’t.