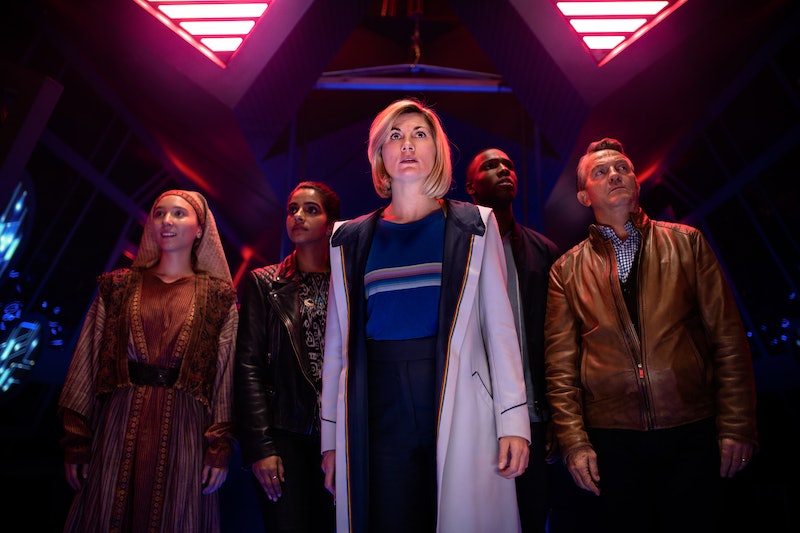 Emotions always run high during the Doctor Who festive special, but this year will be extra tear-jerky as it marks the final time we'll see two of the Doctor's most-loved companions. Fans will be saying goodbye to Graham O'Brien and Ryan Sinclair in 2021, as Bradley Walsh and Tosin Cole are leaving Doctor Who on New Year's Day.

Walsh and Cole have starred in the series since 2018, the year that Jodie Whittaker debuted as the first female Doctor. The actors went on to appear in two series, and the 2019 special "Resolution." In true Doctor Who style, their exit will most likely be dramatic and emotional. "It is very sad," Walsh told Digital Spy. "You can expect a lot of poignancy from the episode."

Cole described filming the last episode "emotional," but he's "looking forward to having a rest" from the production schedule. "It's been an honour to work on such a cultural institution with fans across the world," the actor added. "The people like me on the screen come and go, but it's the people behind the scenes and the fans that will always be there keeping the Doctor Who world alive and exciting."

Showrunner Chris Chibnall may put fans on edge with his comments on the episode, as he says that the cast and crew have "all been in tears watching it," according to Metro. "It's a really important part of the mix of the special, where you get lots of thrills, lots of humour, lots of Daleks [...] I hope it feels like a good send-off for those two characters, whatever happens to them."

Whittaker and Mandip Gill are signed on for series 13, but they'll certainly notice Walsh and Cole's absence. "I felt so incredibly bereaved about this journey has been, because this started as us well and that's so unique," Whittaker said during Metro's interview with the cast. "All of our journeys has been together and been as a family, and we've clicked as a family." Gill added that she's "not really that sort of an emotional person" but that she found herself getting upset over not being able to see Walsh as regularly. "You're so busy, Brad, always filming!"