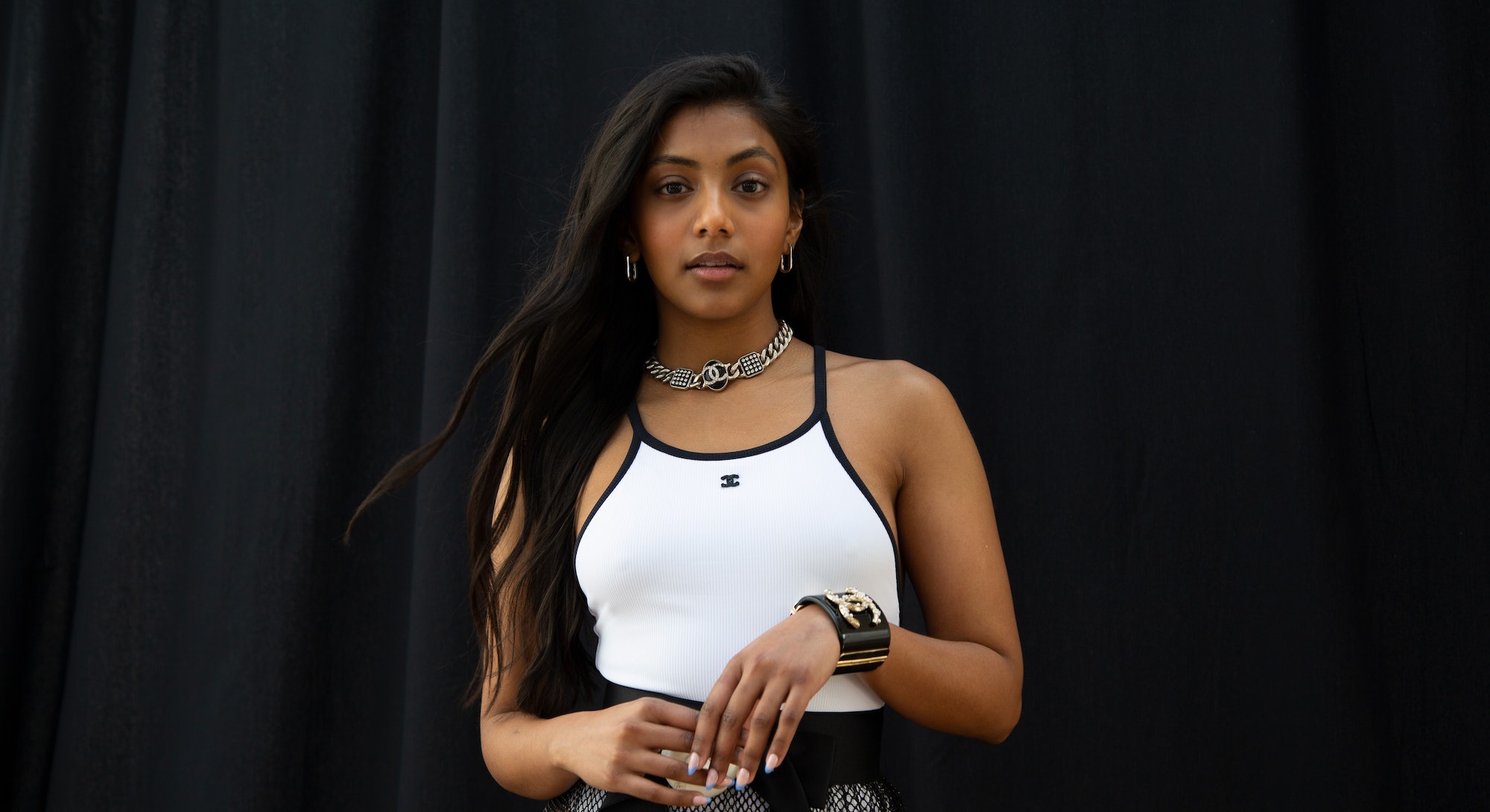 “You have to be a bit of a d*ckhead to believe you’re going to be famous,” Charithra Chandran says with a laugh. “I just don’t believe people will recognise me.” I’m speaking to the actor ahead of Bridgerton’s Season 2 premiere, as she prepares for millions of people worldwide to see her portrayal of the unassuming yet remarkably self-assured Edwina Sharma. Chandran’s co-star Jonathan Bailey, who portrays her on-screen romancer Anthony Bridgerton, has done his best to warn her of the intense scrutiny and fame that comes from being in one of Netflix’s most successful dramas. “Jonny is so caring and is such an older brother [to me],” she explains. “He always says, ‘You’ve got to prepare yourself; things are going to change.’ And I just don’t believe him.”

Of course, Jonny was right. Chandran’s Instagram alone has gone from having 27,000 followers at the time of our conversation to 413,000 at the time of publication. And it’s rising by the minute.

Born in Scotland, Chandran moved to Southern India as a young child, returning to England when she reached school age. She spent her formative years in Oxford and got a degree in philosophy, politics, and economics from the city’s prestigious university. Upon graduating in 2019, she got a “normal” job in the economics sector. Chandran was following a straight path, and a successful one, at that, but she felt adrift. Likening it to being stuck on a train, she tells me: “Before [acting], I never really made conscious decisions as to whether to stay on the train or get off. I was just blindly passing through the stations.” In search of something more, Chandran opted to quit her day job and pursue her acting full time — a decision that garnered “mixed reactions” at home.

The gamble paid off. Chandran soon secured a role in the teen espionage series Alex Rider; then she got the all-important call from her agent, informing her that a future hit show was looking for its new leading lady. Chandran started the audition process for Season 2 before Bridgerton’s first season had even aired. As such, she got to watch the show’s debut with her mum, in the knowledge (and hope) that she might one day be starring in it herself. “My mum and I watch Colin Firth’s Pride and Prejudice once every two months,” Chandran tells me, eagerly. “I’ve read all of Jane Austen’s novels, and my mum and I watch all of the TV adaptations, so this [Bridgerton] was right up our street.”

Some months later, Chandran was told she had got the part of Edwina. The actor welcomed the challenge of taking over from Phoebe Dynevor’s Daphne Bridgerton as the queen-appointed diamond — the chosen debutante of the season. She relished her new title, both on and off the screen. “A lot of the directors would say, ‘Where’s my diamond?’ I enjoyed that. It made me feel special; it’s quite the ego boost,” she admits.

Not that it was all easy. “I do feel the pressure of representing my community and for the show being a success,” she reflects. “But no one is putting that on me. It’s entirely self-inflicted.”

Bridgerton’s second season sees diamond Edwina search for a prosperous marital match, under the watchful eye of her protective older sister, Kate (Simone Ashley). Having traveled to London from India with her mum, Lady Mary (Shelley Conn), and sister for the social season, Edwina soon catches the eye of the ton’s most eligible bachelor, Viscount Anthony Bridgerton, and the pair set about a courtship. All is well on the surface, but little does Edwina know that her prospective husband and her trusted sister harbour a growing — some might say, burning — attraction toward one another. This is far from your typical love triangle though, says Chandran. In fact, it’s not the relationship between Edwina and Anthony that’s important to her, but rather the one between the Sharma siblings.

“Everyone thinks there’s going to be a cat fight among two sisters, but that’s not it at all,” notes the actor. “At the end of Episode 6 [when Edwina abandons Anthony at the altar], what she’s essentially saying to him is ‘I can do so much better than you. You’re trash to me, just go away.’ Edwina cares so much more about Kate. She’s not upset, nor does she think that her sister has stolen Anthony. She’s heartbroken that the person she loved most has betrayed her.” In reality, Chandran doesn’t have any siblings, yet the kinship she experienced with Ashley on-screen transcended far beyond the set.

Below, Chandran talks about the important real-life relationships that shaped her Bridgerton experience, her instant chemistry with Jonathan Bailey, resisting her newfound fame, and her thought-out career plan.

Take me back to the beginning of your Bridgerton journey. After going through the lengthy audition process, how did you feel upon learning you had got the part?

I was elated, of course, but I found out literally three days before doing the read-through for Episodes 1 and 2. My contract went through on Sunday, at 6 p.m. and I went to work on Monday. But it turns out that everyone else knew weeks before me. I was filming Alex Rider at the same time, and with everything going on [lockdown restrictions], there was a lot of really intricate planning that had to be done. Until it was 100% certain that it could work, I wasn’t told. But the head of costume for Bridgerton is very close friends with the head of costume for Alex Rider, so they were secretly in contact, sharing my measurements all along.

I imagine it must be somewhat daunting to join an already established cast. Tell me, how was your first day on set?

Simone and I had the same first day. We were filming the trip to Royal Ascot from Episode 2. It was super scary, as everyone was there. It was a really complex sequence, especially with the live animals, but the benefit was that I got to meet everyone in one go. It was a baptism by fire! The emotions that you feel entering a space and having people staring at you… I don’t even know if I was acting. Of course, you feel apprehensive, like, “Are they going to like me?” But within a few minutes, all of that worry and concern was dispelled.

The cast and crew were so welcoming. And Ruth Gemmell, who plays Lady Violet Bridgerton, said the loveliest thing halfway through filming the series. She just kind of looked at Shelley, Simone, and I, and said, “I can’t remember you guys not being here. It feels like you’ve always been a part of the cast.”

Bridgerton is a spectacularly big project for anyone to film, especially for someone so early on in their career. Did you have a mentor on set?

Even though she’s far too young to be my mum, Shelley and I really bonded. I’m grateful to this show for many things, but one of the main things is having Shelley be in my life. We’re so close now.

You’ve spoken about the enduring connection between sisters Kate and Edwina. Did the fact that you and Simone were both new to the show help you to secure your own close bond?

Logistically, we were stuck together because we were both new and most of our scenes were with each other. Also, when you’re a woman of colour on set, you don’t expect to have other women of colour on set with you. I had a scene partner who is not only another woman of colour but who’s also from the same part of India [the southern state of Tamil Nadu] as me. There’s a negligible chance of that happening, but it did, so it’s super exciting.

In Bridgerton, it’s very much Kate telling Edwina what to do. There’s a hierarchy. In reality, mine and Simone’s relationship is much more symbiotic. I think we both had a lot to teach each other.

Your other main scene partner is, of course, Jonathan Bailey. You’ve mentioned he’s like an older brother to you. Did you have time to get to know each other ahead of filming?

Jonny is so generous. He sent me a “good luck” message on Instagram before my chemistry read with him. He didn’t need to do that, but he knew how daunting it can be, and he just wanted to assure me that everyone was rooting for me. I knew from that moment that we would get along. He’s also from Oxford, so we share a lot of the same landmarks in our lives. And he’s such a brilliant performer. Not to be a pretentious *rs*hole, but acting is reacting, and Jonny gives you a lot to react to.

I’m aware my lifestyle is not reality at the moment. And I don’t want to start thinking it is. My support network actually do live real lives. So it is important for me to maintain those friendships, away from the industry.

Edwina goes on quite the journey throughout the season. When we first meet her, the people around her are making the important decisions for her, but by the end, she’s found her own voice. Were there any stand-out scenes that really challenged you?

Filming the scenes for Episodes 1 and 2 were so different from my own personality, so if I didn’t ground the performance, it could have come off as superficial. The last thing I wanted for Edwina was for her to seem like a manic pixie dream type person who is so sweet and naive. That’s boring. The challenge was to make her an authentic human being, whilst still keeping all of that naivety and diamond-esqueness.

We talked about how there are already more eyes on you, now that you’re part of the Bridgerton cast. As a result, have you changed how you approach your social media?

I’ve already noticed myself holding back a little. I’m way more concerned about how my social media is perceived now than I was a year ago today, for sure. If I’m going to a location, I tend to post online about it after I’ve left, rather than when I’m there. It’s a bizarre concept for me, and very new, but it helps me live in the moment. I feel myself filtering what I say and do, but I’m trying to avoid it and just live my life.

I’m aware my lifestyle is not reality at the moment. And I don’t want to start thinking it is. My support network actually do live real lives. So it is important for me to maintain those friendships, away from the industry.

And how do you see your future within the industry?

I tend to gravitate towards female-led stories. I think women are more interesting. Probably going to get canceled for [saying] that. I’d like to produce, too.

A rule I want to hold myself by, and it will be a challenge in this industry, is that I never want any project to be instrumental. I don’t want to rationalise taking a project by saying to myself, “If I do this, then I’ll be able to do that.” I want every project to be inherent, because I really love it and I’m really passionate about it. Something that will challenge me in a new way or where I’ll learn a new skill. I don’t think I have an abundance mentality with these things. There’s a lot of power in saying “no.”