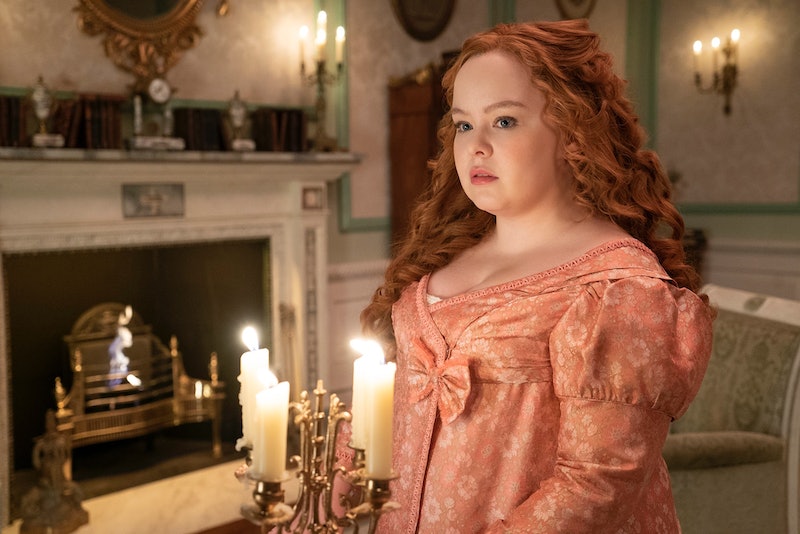 Nicola Coughlan arguably has the most important role of all in Bridgerton Season 2, playing both Penelope Featherington and her alter-ego, the gossipmonger Lady Whistledown. And it seems that Coughlan has picked up a trick or two from Whistledown herself, as she has taken to Instagram with a series of behind-the-scenes Bridgerton selfies.

In the 10 snapshots, the Derry Girls actor revealed her favourite on-set looks, cuddled with another cast member (FYI: a horse), and revealed she had struggled with “mystery” seafood whilst on set. Loyal Bridgerton fans were delighted by the peek behind the curtain, calling the starlet an “icon” for posting the flashback moments.

But many commenters pointed out the absence of any “Polin” pictures. This was, of course, a reference to Penelope and Colin Bridgerton (Luke Newton). The duo are close pals on the show, but fans are eager to see their friendship blossom into something more romantic. As fans of the Bridgerton book series will know all too well, there’s plenty more to come on that front.

Coughlan also posted a group snap of the main cast shortly after the premiere date of Season 2, expressing her love for the “gang.”

Meanwhile, fans have taken to the Twitterverse to call Penelope out for gaslighting Eloise in the run-up to the Bridgerton sister uncovering her Whistledown identity. Speaking to Digital Spy, Coughlan said, “It’s a terrible betrayal. And then, instead of just really owning up to her wrong, she [Penelope] bites back.”

She added: “It’s interesting, because I think it’s part of the reason I like being on a Shondaland show. They’re not afraid to have women do unlikable things. They don’t always have to be perfect angels who never get anything wrong.”

More like this
Netflix Shut Down 'Bridgerton' S3 Rumours About A “Very Dark” Storyline
By Bustle
Harry Styles Had A Major Stage Malfunction At The Grammys
By Darshita Goyal
Twitter Simply Couldn’t Cope With The ‘Happy Valley’ Finale
By Sophie McEvoy
9 Times Catherine Cawood Was An Absolute Badass In 'Happy Valley'
By Sophie McEvoy
Get The Very Best Of Bustle/UK
Sign up for Bustle UK's twice-weekly newsletter, featuring the latest must-watch TV, moving personal stories, and expert advice on the hottest viral buys.