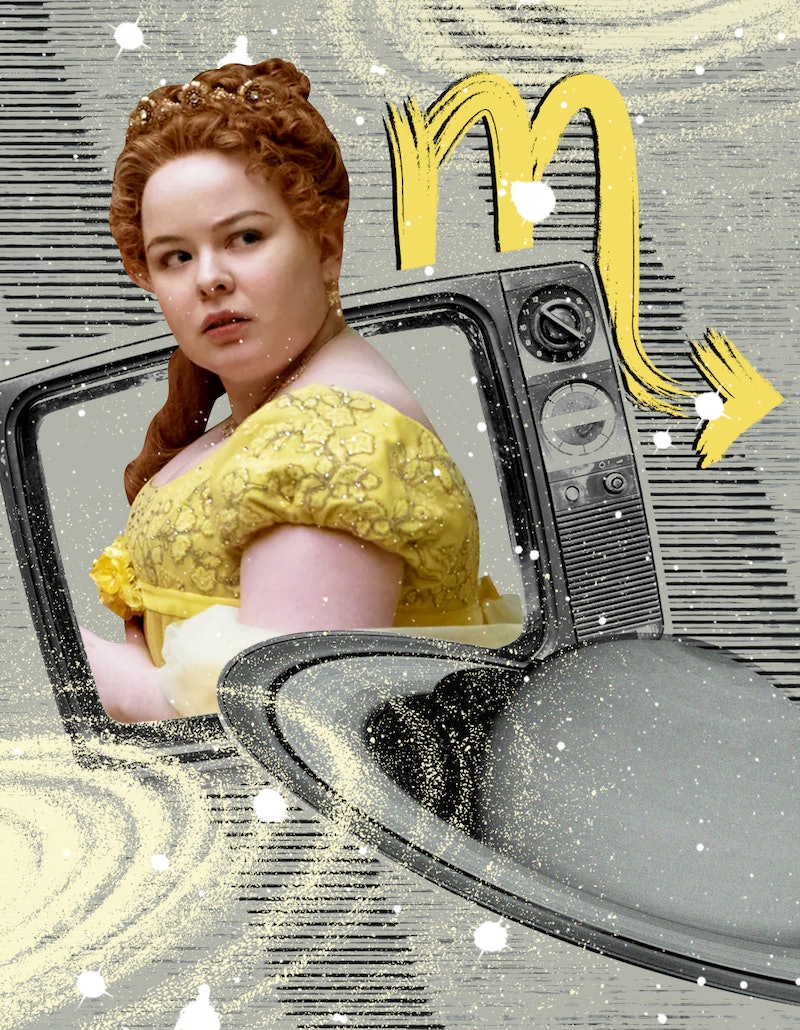 In Astrologically Speaking, astrologers make their case for your new favorite character's zodiac sign, based on specific scenes, quotes, and even fashion choices. Here, Astrologer Six, creator of Black Women Cry, explains why Penelope Featherington of Bridgerton is most definitely a Scorpio zodiac sign. Spoilers for Bridgerton follow.

Bridgerton captured the internet’s heart when it debuted on Dec. 25, 2020. Many of those who had an end-of-year break spent it marathoning the Shonda Rhimes-directed drama, which quickly became the most-watched show on Netflix (that is, until Squid Games sprung onto the scene). With Season 2 of Bridgerton debuting on March 25, it’s high time to look back on one of the series’ fan faves: Penelope Featherington, who’s rumored to play an even bigger role in seasons to come.

At the end of Season 1, the youngest member of the Featherington family, played by Nicola Coughlan, was revealed to have a delicious secret — she is, in fact, Lady Whistledown, the Gossip Girl of Regency-era England. But what motivates the yellow-clad noble to reveal her peers’ deepest and darkest affairs? For that, you might want to look at her zodiac sign. As an astrologer, I can tell you that without a doubt, Penelope embodies a Scorpio Sun sign. Scorpio is ruled by Pluto, the planet that governs all things dark and hidden, but its water element makes the zodiac’s Scorpion a low-key emotional powerhouse — traits that Penelope personifies throughout Season 1 of the show. She may not be Bridgerton’s main character, but the 17-year-old certainly makes a name for herself.

Here are the top three reasons for why Penelope from Bridgerton must have her Sun in Scorpio.

The sun symbolizes a person’s motivations, and in Pluto-ruled Scorpio, that energy comes straight out of the underworld — it has to do with all things dark, hidden, and taboo. As mentioned, Penelope secretly writes the scandal sheets that are continuously referenced throughout the show — even Queen Charlotte reads them! But the talented writer often gets short shrift as Penelope, being overlooked for suitors in favor of her two sisters, Prudence and Philipa. Private Scorpios don’t talk about themselves much; they prefer to let you into their world as opposed to overwhelming you with “unnecessary” details. With Penelope’s major outlet for gossip, why would she bother to share the details of her life with strangers?

Penelope Is An Attentive Friend

Throughout the show, Penelope proves herself to be an engaged listener, who has a keen understanding of the world around her. Her gossip sheet may help motivate her to pay attention to others. In Season 1, Episode 4, “An Affair of Honor,” Penelope walks through the town’s shopping center with her friend Eloise Bridgerton, who shares that she’s dreaming of a day when her education or desire for adventure can take precedence over being chosen by a man. In this scene, Eloise does most of the talking while Penelope practices her active listening skills.

Scorpio rules over some of the most intimate and private parts of a person, and Scorpio suns understand the importance of being attentive to others’ needs. With their water element, Scorpios make incredibly loyal friends, as Penelope embodies in her relationship with Eloise. They value intimacy and its power to transform people and situations, which is likely why Penelope is careful about how much of herself she shares with others.

3. Penelope Can Be Obsessive & Even Vengeful

Penelope is the type of person who gets fixated on an idea or feeling and has trouble letting go, as befits her Scorpio sign’s fixed modality. In Season 1, Episode 6, “Swish,” while the Featherington and Bridgerton families are having dinner, Penelope chooses messiness, and digs herself in deep. Marina, Penelope’s house guest and Colin Bridgerton’s fiancée, is attempting to impress the Bridgerton family while hiding the fact that she’s pregnant. Because Penelope has a longtime crush on Colin, she takes him aside for a one-on-one, hoping that he’ll end their engagement. When he doesn’t, she reveals Marina’s pregnancy in Lady Whistledown’s Society Papers, and Colin breaks it off.

Being ruled by Pluto, planet of hidden secrets, Scorpios have a reputation for getting consumed by issues that don’t concern them. Scorpios are also infamously chaotic; they are happy to seek revenge in lieu of letting bygones be bygones, and can let their power go to their head. Penelope’s leverage over Marina is like catnip for her scorpion’s urge to sting.

Penelope is not perfect, but she’s also only 17. Being a pre-Saturn return Scorpio Sun, she still has growing up to do before reaching her astrological adulthood. Driven by the transformational power of Pluto, she’s already accomplished a lot as a notorious publisher of secrets. Only Season 2 will reveal if Penelope will continue to user her Scorpio powers for chaos or for the benefit of those around her.

More like this
These Are The 3 Most Mellow Zodiac Signs
By Kristine Fellizar
Are Capricorn & Aquarius Compatible In A Relationship? Astrologers Weigh In
By Kristine Fellizar
'Bridgerton' S3 Teases Exciting Social Season For Penelope Featherington
By Bustle
Here’s Your Daily Horoscope for December 7, 2022
By Mecca Woods
Get Even More From Bustle — Sign Up For The Newsletter

This article was originally published on Jan. 25, 2021