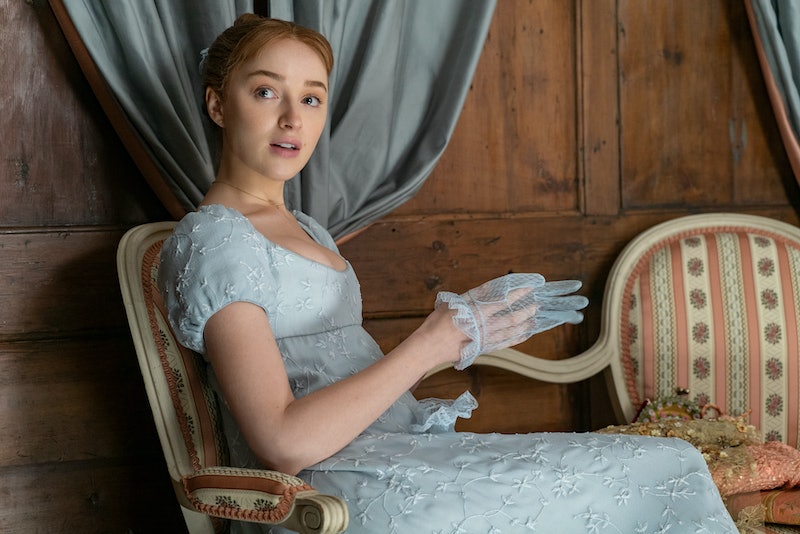 Fans have been clamoring for even more regency romance in the month since Bridgerton first premiered on Netflix, but the show's star doesn't see a new installment arriving on the streaming service anytime soon. During a recent interview with Deadline, Bridgerton star Phoebe Dynevor said she "can't imagine" filming Season 2 during the pandemic due to the fact that it's such an "intimate" show.

The cast and crew wrapped the first season in February, just a month before most of the world was shut down due to the coronavirus pandemic. "We just managed to finish. It was amazing," she recalled, describing the final days of production as a "crazy" time. While many film and TV productions in the United Kingdom have returned to work under strict COVID-19 safety protocols, Dynevor admitted that she doesn't think Bridgerton will start shooting again until after the pandemic is over.

"I can’t imagine how it would be possible to film under these circumstances. There are so many extras and so many crew members, and it’s a very intimate show," Dynevor said, referring to the lavish balls and many steamy love scenes that are the show's signature. "It just baffles me how we would film it under Covid rules unless there was a vaccine beforehand." (Fortunately, the U.K.'s vaccine rollout has begun.)

In addition to making it complicated to film all of her sexy romps with Regé-Jean Page — who played Daphne's husband, Simon Bassett — Dynevor revealed that she and her onscreen partner had to endure "six weeks of choreography and preparation with an intimacy coordinator," in order to be comfortable with one another when the cameras began rolling. The actor explained that she just couldn't picture going through all of that with masks and face shields on, and still be able to develop the kind of chemistry that she and Page did.

Dyenevor's concerns may be a little premature, as Bridgerton has not yet been officially renewed for a second season, despite becoming Netflix's fifth biggest original series launch. Though Production Weekly reported in November that new episodes were slated to begin filming in the U.K. in March, nothing has yet been confirmed regarding further seasons of the show. (There are eight novels in the Bridgerton series in total, and creator Chris Van Dusen is hoping to adapt every one for the screen.)

Of course, that hasn't stopped Dynevor from thinking about what she'd want to see in a potential second season. "I genuinely have no idea what they’re going to do with the second season, but I imagine if they’re following the books, then it would be Anthony’s journey," she told Deadline, referencing the second novel, The Viscount Who Loved Me. "I’m sure Daphne will end up getting involved. But yeah, I do wonder what it looks like. I’m excited to find out."

And while she would love to return to the world of Bridgerton if given the chance, Dynevor is happy to cede the spotlight to her character's older brother in Season 2. "I love that her story ends really nicely; it's all tied up at the end," Dynevor told Town & Country in December. "Now, I have a feeling that she's going to have to get involved with Anthony's love life, since it's his turn next. I'm a hopeless romantic, so I'm all for the happily-ever-after ending."

More like this
'Bridgerton' S3 Teases Exciting Social Season For Penelope Featherington
By Bustle
The ‘Emily In Paris’ Season 3 Trailer Teases Major Career & Love Crossroads For Emily
By Bustle Staff
Everything To Know About 'Elite' Season 7
By Jake Viswanath
The First Trailer For 'That '90s Show' Includes So Many Nods To The Original Series
By Jack Irvin, Alyssa Lapid and Grace Wehniainen
Get Even More From Bustle — Sign Up For The Newsletter