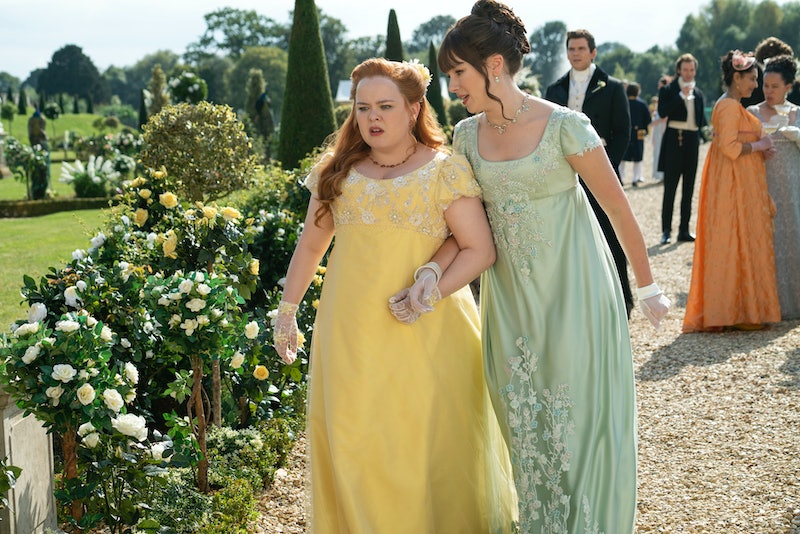 The most memorable Bridgerton scenes are often steamy, whether by way of a literal hookup (hi, Season 2 garden scene) or the pent-up longing (and sniffing) that precedes it. However, Nicola Coughlan, aka Penelope Featherington, recently revealed that one Bridgerton Season 2 scene stuck with her for the opposite reason.

In an interview with E! News published on April 5, Coughlan said the season finale fight between Eloise and Penelope felt way too real. “Friendship breakups are just so horrendous,” she told the outlet. “To film that scene was really harrowing and actually like, made me feel sick to my stomach.”

During the fight, Penelope accuses Eloise of being jealous of her secret writing career — and the young Bridgerton tells Pen she never wants to see her again. Because Coughlan and Claudia Jessie are close friends, they both ended up “really crying” during filming, Coughlan said.

True to their characters’ penchant for investigation, Coughlan and Jessie managed to suss out the bestie breakup before they got scripts for Episode 8. “We had an inkling that this was going to happen from the first couple of episodes,” she said. “Because there was one line where Penelope says to Eloise, ‘You cannot lie to me!’ And I went, ‘Why is she saying that?’”

Once the writers explained that it was an important seed to plant for later in the season, Coughlan said the IRL friends got nervous. “We both went, ‘Oh, no. Oh, no. This is bad.’”

As Jessie told The Guardian in March, the two women were the first characters cast for the show and became fast friends. But behind the scenes, she explained, she’s more of a Penelope — and Coughlan, more of an Eloise. “In Bridgerton, Eloise talks at Penelope a lot of the time; in real life, I’m more introverted and Nicola does most of the chatting,” she said.

More like this
Ashton Kutcher Wants Danny Masterson “To Be Found Innocent” In Rape Retrial
By Jake Viswanath
Here’s Everything Coming To & Leaving Netflix In February
By Jake Viswanath
At 28, Debra Jo Rupp Was Living A Much Different '70s Show
By Grace Wehniainen
'Wednesday' Star Emma Myers Thinks A Wenclair Storyline Is “Possible” In Season 2
By Alyssa Lapid
Get Even More From Bustle — Sign Up For The Newsletter
From hair trends to relationship advice, our daily newsletter has everything you need to sound like a person who’s on TikTok, even if you aren’t.