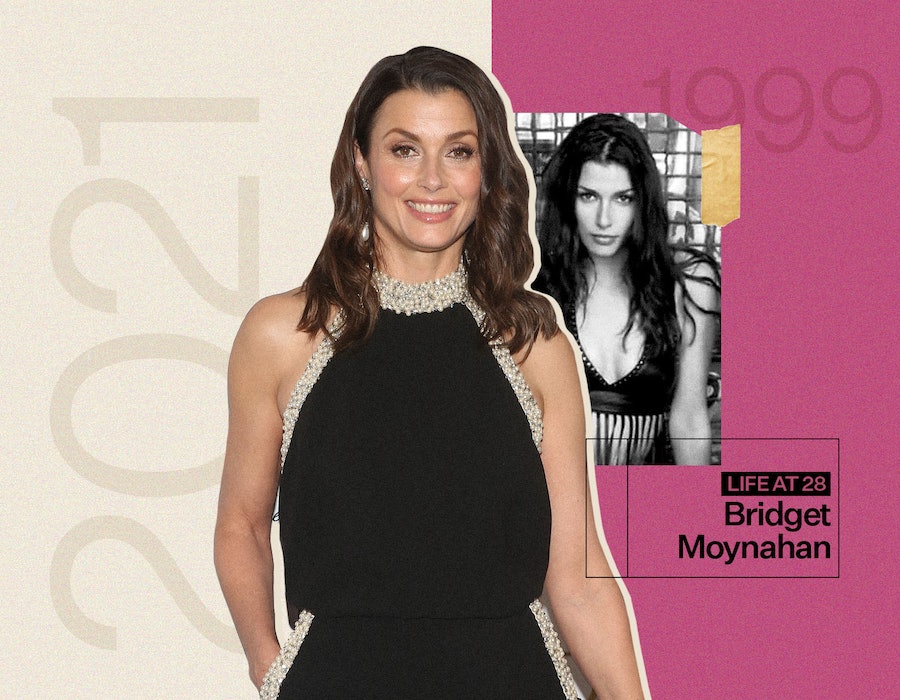 Bridget Moynahan still remembers driving to the set of her 2000 breakout hit Coyote Ugly, her hair whipping in the wind as she zoomed down Sunset Boulevard listening to Prince’s album 1999 on repeat. Her hands were tired from the hours spent learning how to swing liquor bottles behind her back to accurately play Rachel, a take-no-shit bartender who works at the Coyote Ugly bar. When the movie premiered the following year, a billboard for it took up prime real estate on that very boulevard. “It was the first realization of, ‘this is going to be a big movie,’” Moynahan tells Bustle.

Moynahan’s 28th year saw a lot of dreams come to fruition. She had already built up a career as a model who regularly appeared on the covers of Glamour and Cosmo. Though acting had been harder to break into, her grueling years of auditioning were finally paying off: on top of shooting Coyote Ugly, Moynahan also made her TV debut as Mr. Big’s ultra-chic Ralph Lauren model girlfriend Natasha in Sex and the City — a character who is so stunning that Carrie vomits immediately after meeting her. Though the part was relatively small, it was so memorable that Natasha became a recurring character.

“She became a silent nemesis for Carrie Bradshaw,” Moynahan recalls. “Years later, when people would be talking to me about Carrie, I would be like wait… Big cheated on Natasha, don’t forget that, you can’t stick up for Carrie!”

Now with two decades of experience and 12 seasons of her hit network show Blue Bloods under her belt, Moynahan, 50, is returning to her first TV job to play Natasha in HBO Max’s Sex and the City reboot And Just Like That. It’s a full circle moment. “I could have never predicted the career I’ve had,” she says. And no one could have ever predicted that Carrie and Natasha would be crossing paths again all these years later.

Below, Moynahan discusses the energy on the set of Sex and the City, her favorite leather pants, and the advice she would give her 28-year-old self.

It was actually very exciting. I had just done Sex and the City. I was living in LA, filming Coyote Ugly, and working with a trainer and learning to do those dances and driving around Hollywood. It was a full-on new life for me.

What were your most memorable moments from shooting Coyote Ugly?

All of it was so exciting because it was such an involved process. The cast was working together, rehearsing together, learning dances together, learning how to swing bottles behind the bar — it was special. Not every project is like that, where you are immersed with your cast members from day one. It was my first big movie — I had done a few independent films, and then Sex and the City, which was really big in its own way, but it wasn’t like this. It was such a beautiful introduction to the film world.

I had been living in New York going to acting school during the night, working on scenes over the weekend with my scene partners and still modeling during the day to pay my bills. It was a really nice reward getting a project like [Coyote Ugly] after hunkering down and focusing and devoting my time on going to acting school. I didn't really know what I was getting into. I didn’t really know who [Coyote Ugly producer] Jerry Bruckheimer was, I didn't understand the magic and power that he had. He just creates such massive blockbusters — I didn't understand that I was lucky to step into that. That was the year it was all coming together. It was a big year. Not to mention my favorite album ever was 1999, so I was listening to Prince the whole time.

At 28, you also made your TV debut in Sex and the City as Natasha in the famed Hamptons episode, where Carrie finds out Big met you in Paris and proceeds to have a meltdown. Do you remember what it felt like to be on set for the first time?

I have very clear imagery of what it was like to step onto Sex and the City. If you can imagine a full game of double dutch going on — the jump rope game — and that rhythm and pace and then you have to jump in, that is what it was like. It is such an energy. I couldn't believe it [that] after all these years, going onto the set of And Just Like That, it’s still there. It’s big and energetic and so positive and there’s an electric feeling, whether you’re in the hair and makeup trailer or on set in crowds. This time I was able to really just take it all in and be like, “Wow, this is so special.”

As a young actor who had never really done anything before — Sex and the City came before Coyote Ugly — I didn’t even have any lines, let’s be frank, except for “Hi, nice to meet you.” But still I needed to make sure I got those lines right, and I just didn’t want to mess up. You’re thrust right into it. It’s such a well-oiled machine, you have to jump into the action, and I was really nervous.

So often, people conflate a villain with the actor who plays them. Were you nervous to come into the show with so many people rooting for Carrie and Big?

You know what, I really think I was naive. I was like, I got a job. Honestly, I was really psyched to get a job. I didn’t know what Sex and the City was. I knew it was a show, but I didn’t know what it was to step into that role. Maybe it’s better, maybe the ignorance was bliss. I didn’t think too much about it; I didn’t put too much pressure on myself other than don’t mess up. Like at the end of your day, say your line and don’t mess it up too much and hopefully they ask you back.

Have you ever had a Natasha in your life?

If there was a real Natasha now, it would be Amal Clooney, George Clooney's wife. She is just the epitome of perfection. Intelligent, accomplished, compassionate, gorgeous. To me, she is everything. She is the true Natasha.

Did you feel accomplished at 28? Did you feel like you knew where you were going with your life?

I feel like at the particular time, I had already had a great modeling career, and for Sex and the City and Coyote Ugly to kind of be my jumping off platforms in the industry was very exciting and very promising. I definitely felt like this is good, definitely, I am on the right path. I am making a life.

Did you have any other hobbies or passions?

I was a hobby photographer. I had some of those old school polaroid cameras that I would go around and take photographs with, black and white images. I had a musician boyfriend who lived in LA and he bought me a guitar so I was learning how to play guitar. It was a very cool life, I have to say.

Was it a hard adjustment period moving from your longtime home of New York to Los Angeles?

Being in New York, you know it's a grid — LA is not a grid. Navigating those highways, I would call my girlfriend to be like, “I'm on La Cienega and I have to get to the 405… where do I go?” Thank god for Waze and Google Maps. I cried in traffic many times.

I was actually wearing a lot of leather, low slung, lace-up crotch pants. There was a designer called Henry Duarte, he designed for a lot of rock stars but I really dug those pants. I really like them, I have a whole crate full of them that I cannot fit into anymore. I got inspired from the Coyote Ugly wardrobe.

To go buy property. Forget about the shoes, real estate would have been a good idea. And trusting my gut. I remember a project a writer-director had wanted me to audition for and I asked an actor friend to work with me on it and he kept giving me notes and I was like really? I was just not seeing the notes. I auditioned for it and I did not get it. And I remember walking away and thinking, I did not do that my way. I didn’t use my instincts or trust my gut. I took that moment as a learning experience to trust my gut.