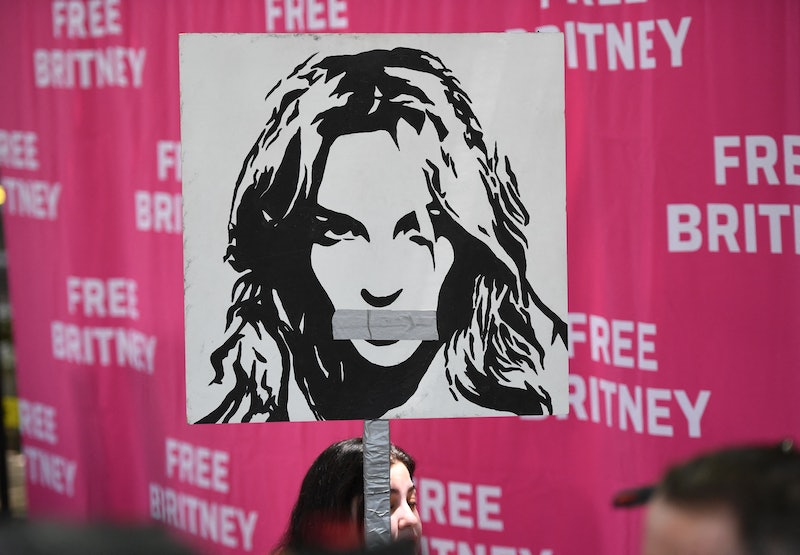 Progress is being made in the fight to #FreeBritney, but it’s far from over. Britney Spears’ latest conservatorship hearing saw Spears finally gaining the ability to hire her own legal counsel. July 14 marked the first hearing on Spears’ conservatorship since she gave her landmark testimony on June 23, which the public was able to listen in on live for the first time. During Wednesday’s closed hearing, Spears called into the hearing remotely to speak out against the controversial legal arrangement and her conservator, father Jamie Spears, once again. “This conservatorship has allowed my dad to ruin my life,” Spears reportedly said.

On July 6, Spears’ court-appointed conservatorship lawyer of 13 years, Samuel D. Ingham III, resigned as her attorney, after Spears claimed in her testimony that she was never allowed by the court to hire her own legal counsel. Days later, The New York Times reported that Spears was in preliminary discussions with Hollywood lawyer and former federal prosecutor Mathew S. Rosengart to represent her. On July 14, Rosengart attended the hearing, and Judge Brenda Penny asked Spears if she wanted to retain him as her new lawyer, which she answered with a yes. Rosengart will now serve as Spears’ attorney after the judge approved her request, as confirmed by NYT. The judge also officially approved Ingham’s petition to resign.

“Their goal was to make me feel crazy and I’m not. And that’s not OK.”

During the hearing, Spears said she was “extremely scared” of her father, declaring that she wants him to be investigated. “I’m here to get rid of my dad and charge him with conservatorship abuse,” she said, as reported by NBC News. Speaking in tears, Spears re-iterated that every aspect of her life has been controlled by others for 13 years, even down to her diet, claiming that her driver’s license, “hair vitamins,” and ability to drink coffee were all taken away at different times. “Their goal was to make me feel crazy and I’m not,” she said. “And that’s not OK.” At one point, Spears told the court she thought those dictating her conservatorship “were trying to kill me,” according to CNN. “If this is not abuse, I don't know what is,” she added.

Spears also opened up about how her issues with Jamie date back to her childhood, saying that her parents would constantly leave her alone in their trailer and expressing how she used to fear that her dad would “show up drunk and embarrass her.” The singer added that she refused to be evaluated in order to remove her father from the conservatorship. According to Variety, Jamie’s lawyer Vivian L. Thoreen said he would not resign voluntarily, questioning Spears’ claims of abuse.

Rosengart is expected to make a big push to end the conservatorship on Spears’ behalf, with fans hoping that he will file an official petition in the near future. Rosengart has previously represented A-list stars like Sean Penn, Steven Spielberg, Julia Louis-Dreyfus, and Keanu Reeves. According to Variety, prior to the hearing, Spears signed a legal document declaring that she had chosen Rosengart, which read: “Pursuant to my statement in open court on June 23, 2021, my rights, and my desire to end the above-referenced conservatorship as to my father, Jamie P. Spears, it is my desire to choose and retain my own counsel, at Greenberg, Traurig, LLP as set forth above.”

Rosengart spoke to reporters outside the courthouse after the hearing, echoing Spears’ request to remove Jamie from the conservatorship. “We will be moving promptly and aggressively for his removal,” he said, as per CNN. “The question remains, why is he involved? He should step down voluntarily because that’s what’s in the best interest of the conservatee.” The lawyer went on to praise Spears’ “courage, passion, and humanity” after she spoke in court. “We feel that today was a big step in the interests of justice, not only in terms of Britney Spears, but in terms of this conservatorship shining a light on what’s happened here and larger issues nationally in terms of conservatorships and how they operate,” he said.

After the hearing, Spears celebrated her legal progress social media:

In her emotional June testimony, the singer told the judge that she was held at a mental health facility and put on lithium against her will in 2019, is being forced to wear an IUD that prevents her from getting pregnant, and called the conservatorship “abusive,” among other allegations.

In response, the judge called on all parties to take Spears’ concerns seriously and agreed that her current conservator Jodi Montgomery should put together a “care plan” that would allow a path for Spears to end her conservatorship. However, she didn’t take any executive action, telling Spears she would need to file a petition in court to finally end the legal arrangement, which did not happen before the hearing, likely in part due to Ingham’s resignation.

Before the July 14 court hearing, New York Times editor and Framing Britney Spears producer Liz Day warned fans not to get their hopes up too much, explaining that the courts have been moving at a particularly slow pace and postponing important matters. “I think it’s possible she will be able to hire her own lawyer,” Day tells Bustle. “I think it’s also possible they delay and kick the can down the road further on a lot of the issues that are on the docket for tomorrow, including her accounting, which is a serious financial matter. I think in some ways there may be some progress for Britney, but in the grand picture, she’s still kind of, you know, stuck.”