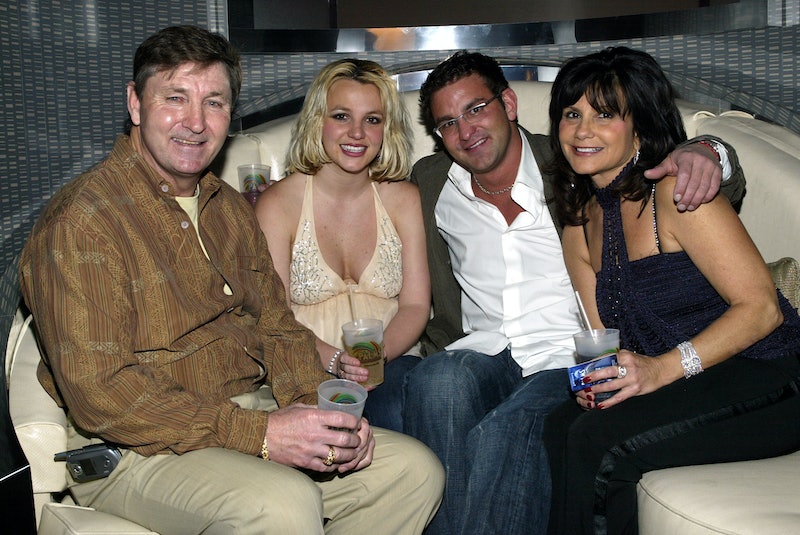 In February, Framing Britney Spears — the Emmy-nominated standalone documentary in FX’s series The New York Times Presents — examined the conservatorship Britney Spears has been under since 2008. Now, a surprise follow-up to the groundbreaking doc, Controlling Britney Spears, offers a closer look at the specifics of that conservatorship. It’s “a portrait of an intense surveillance apparatus that monitored every move the pop star made,” per the New York Times, and it has again put the pop star’s father, Jamie Spears, under scrutiny for his long-standing role as her conservator.

Jamie requested that he be removed from Spears’ conservatorship in August, following months of backlash. Per court documents, “he [did] not believe that a public battle with his daughter over his continuing service as her conservator would be in her best interests.” This September, he petitioned to have the conservatorship ended altogether, for which a hearing will take place on Sept. 29. The major developments were seen as victories by the #FreeBritney camp, but what did the conservatorship look like before public pressure led to Jamie stepping down?

A conservatorship is essentially a legal guardianship that gives someone else control of one’s finances and major life decisions; in this case, it’s been Jamie and a co-conservator (previously lawyer Andrew Wallet but currently Spears’ longtime “care manager,” Jodi Montgomery). Jamie was authorized by the California Superior Court to take over Spears’ business affairs amid her worsening mental health more than 13 years ago, per the BBC. After divorcing Kevin Federline in 2007 and losing custody of her two children, Spears began behaving erratically in the public eye. Most famously, she made headlines for shaving her head and hitting a paparazzo’s car with an umbrella. After a three-hour stand-off with police, during which she refused to surrender her sons, the singer was placed in psychiatric care and the conservatorship was enacted.

In the years since, Jamie has been in control of Spears’ money, career, and even personal visitations. Throughout that time, she has released three albums and done a Las Vegas residency. But supporters of the #FreeBritney movement often questioned if that was of Spears’ own volition or at the behest of her dad. Spears’ parents divorced in 2002, and, according to the New York Times, she was still estranged from her father when the conservatorship was put in place. This led some fans to question whether stepping into the role was an opportunistic move by Jamie to financially benefit from his daughter’s career (per the Times, he was awarded 1.5% of the gross revenues from Spears’ Las Vegas residency as well as a $130,000 salary).

Jamie has denied those claims. In an August 2020 interview with the New York Post, he said the #FreeBritney movement was “a joke” and that “all these conspiracy theorists don’t know anything.” He also asserted that he wasn’t skimming any money from Spears and has to “report every nickel and dime spent to the court” each year. “I love my daughter,” he added. “I love all my kids. But this is our business. It’s private.”

Still, concerns about how much control Spears has over her career remained. In 2019, Spears canceled her Las Vegas residency, citing Jamie’s poor health after he “almost died” from a ruptured colon. “I don’t even know where to start with this, because this is so tough for me to say,” she wrote in a Jan. 4, 2019 Instagram post. “I will not be performing my new show Domination. I’ve been looking forward to this show and seeing all of you this year, so doing this breaks my heart. However, it’s important to always put your family first.”

In September 2019, Jamie temporarily relinquished his powers over the conservatorship to Montgomery due to “personal health reasons.” A source then claimed to Us Weekly in August 2020 that “Britney does want the conservatorship of her as a person to end, but she was concerned that Jamie could attempt to have the temporary conservator [Montgomery] removed.” The source went on to say that “Britney and her dad have a complicated relationship,” and over time, she “began to resent her dad” for being her conservator.

Jamie himself does not appear in the Controlling Britney Spears doc, but he did issue a statement via his lawyer to the New York Times, insisting that “his actions were done with knowledge and consent of Britney, her court-appointed attorney and/or the court.”

“Jamie’s record as conservator — and the court’s approval of his actions — speak for themselves,” the statement continued. “Jamie loves Britney unwaveringly and wants only the best for her. He will never stop loving or supporting his daughter.”

For now, Spears remains under conservatorship and it remains to be seen what kind of relationship they’ll have once it’s over.