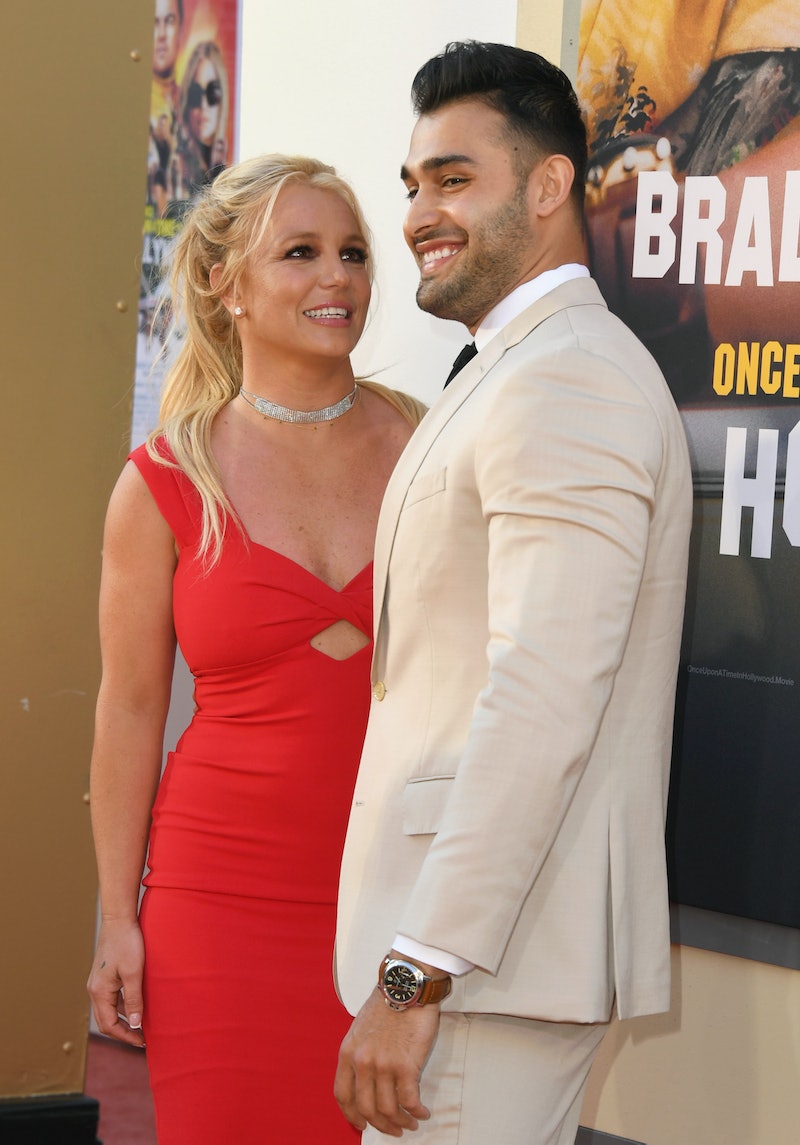 There’s a newcomer to Britney Spears and Sam Asghari’s family: a Doberman puppy — and future guard dog — named Porsha. The couple showed off their furry bundle of joy in an Instagram video posted to Asghari’s account on Friday, Oct. 8, with an off-camera Spears prompting her fiancé to introduce Porsha. Asghari explained his big plans for their “new addition,” telling the Grammy winner that Porsha is going to “unconditionally love you” and be “trained to protect you from any mother*cker that comes around you with bad intentions.”

The protective husband-to-be gave further details about how Porsha came into their lives in his caption. “Surprised my fiancé with our newest member to the Family,” he wrote in his Instagram caption. And, in case he wasn’t already clear that she was on her way to becoming a guard dog, he added the hashtag #homesecurity. Clearly, he isn’t messing around when it comes to their safety.

For now at least, Porsha doesn’t look up to much protecting yet. She was featured in some of Asghari’s Instagram stories on Oct. 8, and two videos showed her looking confused as someone out of the frame (presumably her new dad) howled at her. In another cute moment Asghari shared, Porsha was curled up to his side, sleeping. “You’re supposed to be guarding!” he wrote over the photo.

The fitness trainer, who has been dating Spears since 2016, knows more than a little something about defending her. He has been in her corner throughout her recent (and ultimately successful) battle to get her father, Jamie Spears, removed as her conservator. In a blunt moment in February, he called Jamie “a total d*ck,” also writing that he has “zero respect for someone trying to control our relationship and constantly throwing obstacles in our way.” (For his part, Jamie has said through his lawyers that he served as his daughter’s conservator “because he loves her.”)

More recently, Asghari popped the question to Spears. The singer revealed their engagement in a Sept. 12 Instagram video, captioning it, “I can’t f*cking believe it” and adding six ring emojis and a heavy heart exclamation mark emoji. Now, Porsha makes three, and it sounds like kids could be in the future as well. During her bombshell court testimony on June 23, Spears told the judge that she has an IUD she doesn’t want. “I would like to progressively move forward and I want to have the real deal,” she said. “I want to be able to get married and have a baby.”

Porsha should be good parenting practice for Spears and Asghari, and it sounds like they have big plans for her, too.

More like this
Britney Spears Shared The Real Reason She Shut Down Her Instagram Account
By Brad Witter
All The Best Celebrity Reactions At The 2023 Grammys
By Brad Witter
The Beyhive Is Mad At Harry Styles After Beyoncé’s Album Of The Year Snub
By Jake Viswanath
9 Photos Of Celebrity Couples & Unexpected Duos At The 2023 Grammys
By Jake Viswanath
Get Even More From Bustle — Sign Up For The Newsletter
From hair trends to relationship advice, our daily newsletter has everything you need to sound like a person who’s on TikTok, even if you aren’t.