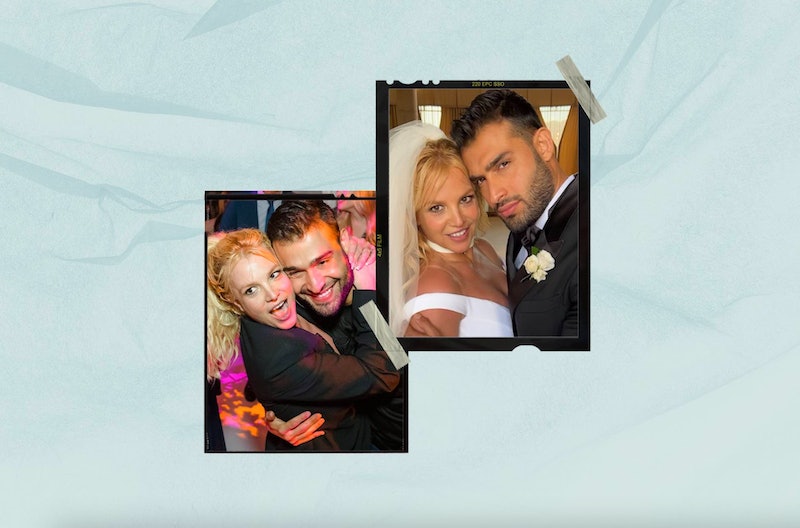 Britney Spears’ fiancé was the biggest #FreeBritney supporter in the world, and now that her controversial conservatorship is over, he’s her husband. Spears has been in a relationship with Sam Asghari, a 28-year-old Iranian-American actor and model, for more than five years — and their relationship timeline proves that not only is he in it for the long haul.

Like a classic pop star fairytale, Spears met Asghari on the set of her “Slumber Party” music video in 2016, where he played the sexy love interest who immediately becomes intrigued by the star. While they proudly show each other off in workout videos and candid photos shared on Instagram, Asghari has been relatively quiet about their relationship in the press. Now that said legal battle is over — a judge terminated the conservatorship in November — the couple has been busy checking off big milestones. First step? Their wedding on June 9, 2022.

READ NEXT: What Is Britney Spears’ Net Worth?

Here’s everything to know about Spears and Asghari’s relationship timeline, so far.

Spears met Asghari while filming the music video for her Glory single “Slumber Party” featuring Tinashe in October 2016. When she’s not frolicking around a lavish mansion with her collaborator Tinashe in the video, which premiered in November that year, Spears seduces Asghari into having a little slumber party, even crawling up a lavish dining table and licking milk straight out of Asghari’s bowl. Anyone would’ve instantly fallen in love with Spears in that moment.

Rumors that Spears and Asghari had become an item started surfacing at the end of 2016 because of the “Slumber Party” video. However, she made their relationship Instagram official on New Year’s Day, sharing a photo of the couple at dinner with Asghari’s arm wrapped around her and wishing fans a simple “Happy New Year.”

Later that month in a radio interview, Spears opened up about how she connected with Asghari, saying they naturally bonded while waiting to film scenes for the video. “We were sitting there and we were waiting together for 20 minutes at a time,” she explained. “So we were basically forced to talk to each other and he has no idea — I mean, he knows my name — but he doesn’t know me as a person. He’s like, ‘What is this girl like?’ and I have no idea who the hell he is.” After filming the video, Spears said she made the first move and invited him out for sushi. “I found his number in my bag,” she explained. “I was like, ‘He is really cute, this guy is really cute.’ So I called him and ever since then, he is just a really fun, funny person.”

On Feb 12, 2017, Spears and Asghari made their first public appearance together at Clive Davis’ annual Pre-Grammy Gala. While Asghari didn’t walk the red carpet with her, it still marked their debut as a couple. Since then, they have also attended the GLAAD Media Awards in 2018 and the Once Upon a Time ... in Hollywood red carpet premiere in 2019 together, among other events.

As any couple knows, no love story can ever be complete until you go to Disneyland together. Spears and Asghari hit up the Happiest Place on Earth on Sept. 10, 2017. Not only was it their first time at the theme park together, but Asghari was there to celebrate the birthdays of Spears’ sons — Sean Preston and Jayden James Federline — demonstrating how far they had come in their relationship.

In February 2018, Spears belatedly celebrated their first anniversary as a couple on Instagram, sharing a photo of them posing near a scenic waterfall. “I’ve been with this man for over a year,” she wrote. “Everyday he inspires me to be a better person and that makes me feel like the luckiest girl in the world!”

Nearly two years after they started dating, Asghari told his story of how they connected in an interview with Men’s Health, revealing that he was nervous to meet the superstar. “I was excited that I get to meet one of the biggest artists of all time,” he said. “I had butterflies.” However, his attempt to “Break the Ice” almost completely backfired. “She said, ‘Hi, I’m Britney,’ and I said, ‘I’m sorry. What’s your name again?’” he recalled. “I tried to be funny. I don’t think anybody got it.” Evidently, Spears was the only one who did, and the down-to-Earth joke led to them talking during breaks and eventually sharing phone numbers before the video shoot wrapped.

After it was reported that Spears entered a mental health facility in April 2019, Asghari took to Instagram to publicly support her. “It isn’t weakness, It’s a sign of absolute strength, people should only be inspired by this, at least I am,” Asghari captioned his post, completing it with #stronger, after Spears’ 2000 hit self-empowerment anthem.

On May 17, 2019, Spears posted a slideshow of three selfies with her and Asghari on Instagram, with the simple caption, “I love this man.” Even in the face of adversity (Spears later revealed that she was allegedly held at the mental health facility against her will), Asghari had proven to be a safe haven for her.

On March 4, 2020, Spears commemorated her boyfriend’s birthday by posting a seductive photo of Asghari in the bathtub and revealing that she took the picture, saying that he was “the only man I’ve ever photographed in my life” on Instagram. “Yes folks, he’s a stunner,” she captioned the post. “But I must say this shot is my favorite on his page …… why you ask ????! Well it’s because I shot it of course !!!! All I said was don’t look at the camera ….. he listened and it was magic !!!!... Happy Belated B-day @samasghari ..... love you !!!!!”

After the premiere of Hulu’s New York Times documentary Framing Britney Spears, Asghari made a rare statement about Spears’ family on his Instagram Story and spoke out against her father and conservator Jamie Spears, calling him a “total dick” and claiming that he attempted to make their relationship difficult.

“Now it’s important for people to understand that I have zero respect for someone trying to control our relationship and constantly throwing obstacles our way,” he wrote. “In my opinion Jamie is a total d*ck. I won’t be going into details because I’ve always respected our privacy but at the same time I didn’t come to this country to not be able to express my freedom and opinion.”

Right before Spears took the stand during her conservatorship hearing on June 23, Asghari took to his Instagram Story to show his support for Spears as she prepared to speak against her legal arrangement. The model uploaded a selfie wearing a “Free Britney” T-shirt, officially proclaiming his support for the fan-driven online movement. He also added a “lion” emoji, referring to his affectionate nickname for Spears: “lioness.”

The couple that fights for freedom together stays together.

On Sept. 12, just hours before the 2021 MTV Video Music Awards, Spears announced her engagement to Ashgari via Instagram. “I can’t f*cking believe it,” she captioned the post, in which she showed off her all-new rock. According to Brandon Cohen, Asghari's manager, the “one-of-a-kind ring” was designed by New York-based jeweler Roman Malayev’s Forever Diamonds. “Britney is ecstatic,” a friend close to the pop star told People.

Even though Asghari and Spears are (presumably) not married yet, they soon began calling each other “husband” and “wife” anyway — leading some to wonder whether they had a low-key wedding in private. In December, Asghari wished his “wife” a happy birthday — and months later, Spears referred to Asghari as her “husband” in several Instagram posts.

In April, Spears revealed that she was pregnant with the couple’s first child together. “I lost so much weight to go on my Maui trip only to gain it back,” she wrote on Instagram. “I thought, ‘Geez… what happened to my stomach ???’ My husband said, ‘No you’re food pregnant silly!!!’ So I got a pregnancy test … and uhhhhh well … I am having a baby.”

Later that month, in a rare interview, Asghari told Access that he doesn’t want to know the sex of their baby early — but ultimately, that choice was definitely up to Spears. “She’s amazing, man,” he told Mario Lopez. “She loves it. We’re both so excited, and so thrilled.” While he didn’t reveal too many details, he also dished about his proposal to Spears, calling it “extravagant” — and late. “It was very extravagant and it was surprising,” he revealed. “I did it the best way possible. It’s something we keep as a secret. Sometimes, you’ve got to keep secrets.” He also said their five dogs witnessed the proposal. “It was the right time like four years ago maybe,” he quipped. “It’s way overdue.”

For Mother’s Day on May 8, Asghari posted a message to Spears on his Instagram Story, reminding fans of their engagement with a closeup of her sparkling ring and a tease of their wedding date, which has been scheduled but kept secret. “Our lives has been a real life fairytale. Happy Mother’s Day to you my soon to be queen,” he wrote, before adding. “Also the big day has been set! But nobody will know until the day after.”

Earlier that day, Spears gave fans a sneak peek at her wedding dress while also welcoming her new cat to Instagram. “Introducing Wendy !!!” she wrote, captioning a photo of the feline. “And yes, this is the veil to my wedding dress !!!” While we may not know when they’ll tie the knot, Spears clearly has no problem with Asghari seeing just a little bit of her gorgeous gown.

Sadly, on May 14, Spears and Asghari announced that they had suffered a pregnancy loss, saying they lost their “miracle baby” early in the pregnancy. “This is a devastating time for any parent,” they wrote in a joint statement. “We will continue trying to expand our beautiful family. We are grateful for all of your support. We kindly ask for privacy during this difficult moment.”

On June 9, TMZ reported that Spears was set to marry Asghari that day in Los Angeles after six years of dating — and the wedding did happen — but not without a bit of drama first. Hours before the wedding, Spears’ first ex-husband, Jason Alexander (to whom she was married for less than three days) tried to crash the event, TMZ reported. He even took to Instagram to live-stream sneaking onto Spears’ property, where the wedding was being held.

But ultimately, Alexander was arrested — and the wedding seemed to go off with no more hiccups. Paris Hilton, Selena Gomez, Madonna, and Drew Barrymore were among the guests. Of Spears’ family, only Bryan Spears, her brother, made the invite list. The couple both wore Versace for the big day, per Vogue.

Spears and Madonna shared a kiss, perfectly recreating their on-stage smooch from 19 years earlier. While singing together at the 2003 MTV Video Music Awards — in a wedding-themed performance, no less — Madonna and Spears kissed each other, to the apparent discomfort of Spears’ ex Justin Timberlake in the audience. At one point during the reception, Donatella Versace, Hilton, Madonna, Gomez, and Barrymore sang “Vogue” together with Spears, but instead of singing the title moment of the song, Madonna raised her glass and sang, “Britney!”