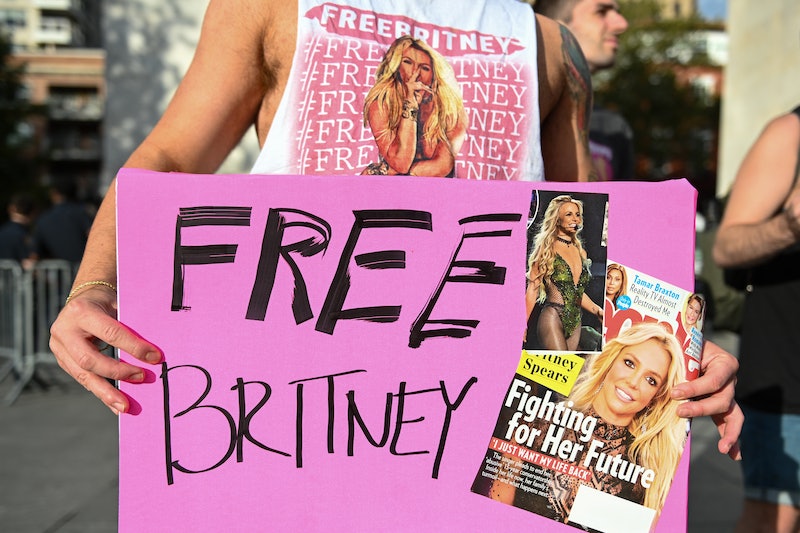 There is a light at the end of the tunnel for Britney Spears, though her fight for freedom isn’t over just yet. During Spears’ anticipated conservatorship hearing on Wednesday, Sept. 29, the singer’s father Jamie Spears was suspended as the conservator of her estate, effective immediately. Now, Jamie must turn over all assets and legal documents pertaining to Spears’ estate and controversial conservatorship, which she has been under since 2008.

Judge Brenda Penny made the landmark ruling, granting a request that Spears had made in court several times, most notably in a June 23 court hearing, where Spears accused Jamie of conservatorship abuse. “This man does not belong in her life, your honor, for another day,” Spears’ new lawyer Mathew Rosengart argued in court, according to The New York Times. “Please hear the plea of my client.” After hearing arguments from both sides, Penny agreed that Jamie’s suspension “is in the best interest of the conservatee,” adding that “the current situation is not tenable.” John Zabel, a certified public accountant who was reportedly handpicked by Spears and her legal team, will now serve as the temporary conservator of Spears’ estate.

In a July 14 hearing, Spears was finally granted the ability to hire her own legal counsel and retained Rosengart, a former prosecutor, as her attorney. He acted quickly, filing a legal petition two weeks later demanding that Jamie be removed as conservator of the singer’s estate. Jamie acquiesced, agreeing to eventually step down and “transition to a new conservator,” but arguing that his removal wasn’t necessary. Surprisingly, Jamie went a step further on Sept. 9, filing a petition to terminate the conservatorship altogether, just days after Rosengart accused him of trying to extort his daughter for over $2 million in legal fees and various expenses.

After Spears and her legal team’s request to suspend Jamie was granted, Rosengart asked that a hearing to end Spears’ conservatorship for good be set within 30 to 45 days. Her next — and possibly final — conservatorship hearing is currently set for Nov. 12, but the official procedure for termination could even be completed before that date.

As per ITV reporter Emma Murphy, in Wednesday’s hearing, Rosengart said Spears called for an immediate suspension of her father and told the judge they would not accept Jamie’s request to terminate the conservatorship, calling it an attempt to avoid even more abuse allegations. The attorney pointed out that if a new temporary conservator was instated, Jamie would have to hand over all legal documents concerning the conservatorship, including conservations with his lawyers, which would give full details about what has truly happened in the past 13 years.

As reported by NYT, Jamie’s lawyer Vivian Thoreen argued to end the legal arrangement right away, but Rosengart kept pushing to simply suspend Jamie in order to further investigate his conduct of the conservatorship. Judge Penny has directed Jamie’s legal team to turn over all assets to Zabel as soon as possible. According to Variety, Thoreen objected to the ruling, calling Zabel a “stranger” in the conservatorship, but was denied the ability to appeal the suspension.

Soon after Jamie was suspended, Spears’ fiancé Sam Asghari celebrated the big news on his Instagram Story. “Free Britney! Congratulations!!!!!!!!!” he wrote, following it up with a photo of Spears holding his hand and showing off her new engagement ring. Asghari also acknowledged #FreeBritney supporters on his Story, sharing a photo of a lioness, which he often uses as a loving nickname for the singer. “She did this,” he captioned the photo. “Her fan base is a called the army for a reason.” Meanwhile, Spears posted a cryptic caption after the hearing.

In light of accusations in Hulu’s New York Times documentary Controlling Britney Spears that Jamie secretly recorded Spears’ private conversations, including confidential talks with her lawyer, and allegedly had a recording device installed in her bedroom, Rosengart filed another petition two days before the hearing, stressing the urgency of Jamie being removed from the conservatorship and stating the allegations warranted a serious investigation. California is a “two-party” state that requires permission from both parties to be recorded, and it’s not known if Spears or the court were aware of the recordings.

Spears spoke out against her conservatorship for the first time on June 23, giving an emotional testimony that called for an end to the legal arrangement. “It’s been 13 years and it’s enough,” she said. “I truly believe this conservatorship is abusive.” She accused her father and now-former conservator of holding her in a mental health facility against her will, and forcing her to wear an IUD despite her desire to have more children. She spoke out once again on July 14, detailing more actions that Jamie allegedly took to control her, including taking away her driver’s license, “hair vitamins,” and ability to drink coffee. “Their goal was to make me feel crazy and I’m not,” she said. “And that’s not OK.”