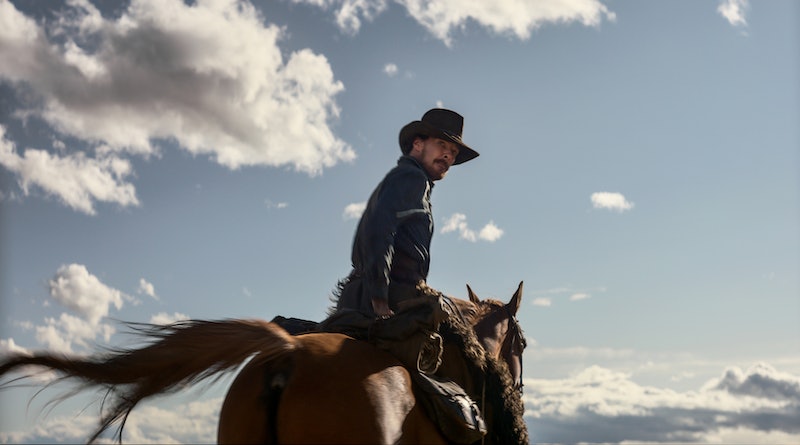 With The Power of the Dog, Jane Campion makes her triumphant return to the director’s chair after over a decade — and this time, she’s made a Western. The film follows Phil (Benedict Cumberbatch), a cowboy who owns a ranch with his brother George (Jesse Plemons). When George meets and marries Rose (Kirsten Dunst), Phil subjects her queer-coded son Peter (Kodi Smit-McPhee) to taunts and ridicule. But Phil has a secret that explains his malice: his onetime relationship with Bronco Henry, his late mentor. Phil keeps Bronco’s memory alive by regaling all who’ll listen with stories about his skills on horseback — and, in more private moments, by caressing Bronco’s monogrammed handkerchief.

Movies like The Power of the Dog and Ang Lee’s Brokeback Mountain shed light on queerness in the West, a long-overlooked aspect of American history. Below, a brief overview of the queer history that inspired The Power of the Dog, and how Bronco Henry fits into it.

Bronco Henry is partially based on a historical figure.

The film is adapted from Thomas Savage’s novel of the same name, and Savage based the character of Bronco Henry on a real cowboy he knew, Bronco Henry Williams. He lived in Lemhi County, Idaho in the early 20th century, and — according to O. Alan Weltzien, who wrote the biography Savage West: The Life and Fiction of Thomas Savage — Williams sporadically worked as a ranch hand for Savage’s maternal grandparents. The character also appears in a few of Savage’s other works, like For Mary, With Love and Lona Hanson.

But Savage’s version of Williams is heavily fictionalized. For one, there is no record that the horseman was queer — and in another of Savage’s novels, the author reuses the character, but depicts him as straight.

However, as Weltzien writes, Savage himself was a gay man (though he did live in a heterosexual marriage). For as long as there have been cowboys, there have also been queer cowboys, and there is a well-documented history of queerness in the West.

There’s a history of same-sex relationships among cowboys in the American West.

It’s taken awhile for popular culture to catch onto the West’s queer history, but historians and experts have long known about it. Alfred C. Kinsey noted in his famous Sexual Behavior in the Human Male that rural communities in America had the “highest frequency” of queer relations, writing, “...there is a fair amount of sexual contact among the older males in Western rural areas … Today it is found among ranchmen, cattle men, prospectors, lumbermen, and farming groups in general — among groups that are virile, physically active. These are men who have faced the rigors of nature in the wild … Such a background breeds the attitude that sex is sex, irrespective of the nature of the partner with whom the relation is had.”

Peter Boag, a history professor of the American West at Washington State University and author of Same-Sex Affairs: Constructing and Controlling Homosexuality in the Pacific Northwest, notes that many Western, all-male societies subverted gender roles out of necessity. In an interview on the subject, Boag explained, “In all-men societies, it was not unusual for same sex relationships, and it was just an acceptable thing to do. People engaged in same sex activities weren’t seen as homosexuals.”

The West was also home to trans and gender-nonconforming people.

Some cowboys, like the famed One-Eyed Charlie, were assigned female at birth but lived as men. “My theory is that people who were transgender in the East could read these stories that gave a kind of validation to their lives,” Boag told Atlas Obscura. “They saw the West as a place where they could live and get jobs and carry on a life that they couldn’t have in the more congested East.”

There were also trans women who lived in the West, like Mrs. Nash, who worked as a laundress for the Seventh Cavalry in Montana in the mid-1800s. She married three different men during her time working for the cavalry.

It’s also important to note that many cowboys were people of color.

Rebecca Scofield, a history professor at University of Idaho, notes in her book Outriders: Rodeo at the Fringes of the American West that “for many, the cowboy has always been [Black] and gay.” Many cowhands in the 1800s were working-class men of color, including both enslaved and free Black men, as well as Indigenous, Creole, and Mexican people. “These classed and racialized realities of working cowboys were present in early versions of western performance, even as the figure of the cowboy steadily became whitewashed by Jim Crow segregation and mythologized in dime novels, Wild West shows, and early rodeo,” she writes.

Scofield goes on to reference more contemporary examples, such as rapper Lil Nas X’s 2019 song “Old Town Road” and the criticism he faced as a queer Black person paying homage to country music. “Yet as this young man is inundated with both praise and vitriol, told that he is either destined to be forgotten or represents the future, he should not be made to feel alone — the history of the cowboy is the history of black, gay cowboys,” Scofield explains.

Gay cowboys are still very much a thing.

Last year, The Guardian published an article exploring the contemporary world of queer cowboys, and in particular the International Gay Rodeo Association (IGRA), along with a series of portraits taken by photographer Luke Gilford for his project “National Anthem.” The IGRA held its first gay rodeo in the mid-’70s, and the organization is still going strong today — as of last year, it boasted 15 chapters across the US, along with one in Canada.

Gilford also explained to i-D that the IGRA is a “safe space” for both queer people and allies. It offers educational programs and rodeo competitions for men, women, and trans people, which are designed to help participants refine their athletic skills and to promote integrity, self-confidence, and communal support. The organization also gives queer cowboys an opportunity to connect with others in the LGBTQ+ community, including BIPOC queer people, who have been historically unwelcome in the “almost exclusively Caucasian mainstream rodeo circuit.”

One of the reasons why Gilford started this project was to show that while queer cowboys continue to face unfair and unequal treatment, not everything is enveloped in tragedy. “This community does know joy, and they know it because they have survived the trauma of being queer in rural America. We often think of survival as something that just happens to us, or that we are blessed with,” Gilford explained. “But through creating this work I came to think of survival as more of a deliberate political and creative force. It requires constant work to sustain and protect against all odds.”

Correction: This article previously reported that Bronco Henry was not based on a real person, but he was inspired by a real cowboy whom Thomas Savage had known.

More like this
Here’s Everything Coming To & Leaving Netflix In February
By Jake Viswanath
11 Movies To Watch At The 2023 Sundance Film Festival
By Chloe Foussianes
Yes, You Can Stream ‘To Leslie’ In The UK Now
By Sam Ramsden
Twitter Is Mad At The Razzie Awards For Nominating A Child For Worst Actress
By Radhika Menon
Get Even More From Bustle — Sign Up For The Newsletter
From hair trends to relationship advice, our daily newsletter has everything you need to sound like a person who’s on TikTok, even if you aren’t.

This article was originally published on Dec. 1, 2021