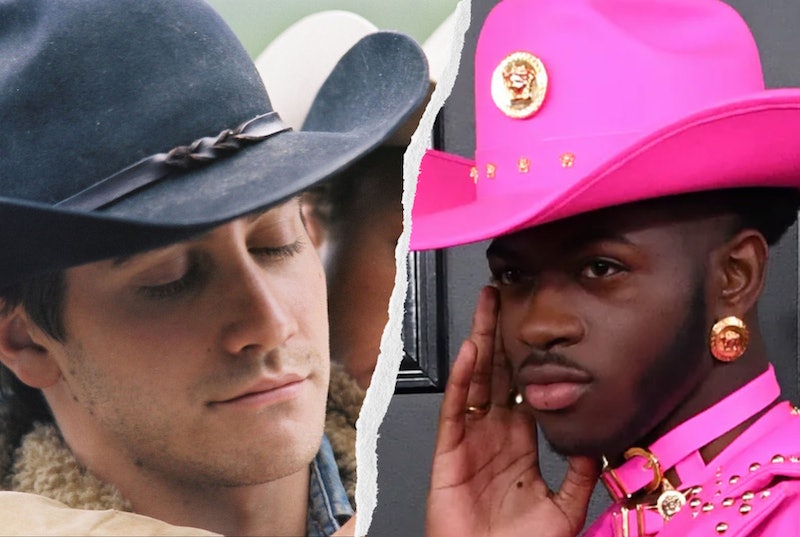 In case you weren’t aware, Lil Nas X is proudly gay. Not only is he putting his sexuality in the forefront for his MONTERO album era, but he’s also taking cues from pop culture history — specifically from one of the most prolific LGBTQ+ films — to make his point even clearer. On Sept. 20, Lil Nas X shared a TikTok video that shows the Brokeback Mountain references in his new music video for “THATS WHAT I WANT,” confirming he’s giving nods to the Oscar-winning film.

The rapper-singer uploaded to his Instagram Story a TikTok from user @juanfoster showing the parallels between the groundbreaking Brokeback Mountain from 2005 and his new video released this month. In one scene, Lil Nas serenades his crush by playing guitar in front of the campfire wearing a cowboy hat, almost mirroring a camping scene with Heath Ledger and Jake Gyllenhaal (you know, the one before that steamy tent scene). In the next shot, he recreates a scene where Gyllenhaal’s character drives away in his pickup truck, frustrated and holding back tears. Later in the video, Lil Nas visits his lover only to discover he’s married to with a child, just like in the film.

In the film, Ledger and Gyllenhaal play Ennis and Jack, two cowboys who fall for each other while working summer jobs but go on to marry other women, kicking off a years-long love affair.

Brokeback Mountain received nine Oscar nominations, including Best Actor for Ledger, Supporting Actor for Gyllenhaal, and Best Picture, which was controversially lost to Crash, causing critics to blame the voters’ decision on homophobia. The film went on to win three Oscars, including Best Director and Best Adapted Screenplay.

This is not the first time that Lil Nas has delved into pop culture inspirations for his art. He is the king of SpongeBob SquarePants references, not only using the show as meme material on a regular basis, but even being inspired by the “levitating SpongeBob” meme for his MONTERO album cover. For all we know, he’s going to create his own animated Lil Nas X next, just like the animated Lizzie McGuire.

More like this
Lisa Marie Presley Reviewed Baz Luhrmann’s ‘Elvis’ Movie On Twitter
By Grace Wehniainen
Tom Cruise Gives His Honest Review Of Lady Gaga’s New Song For 'Top Gun: Maverick'
By Hugh McIntyre
The 1st Photo Of Priyanka & Nick's' Baby Comes After 100 Days In The Hospital
By Jake Viswanath and Hugh McIntyre
How 2 'American Idol' Singers Performed With COVID-19 & Made It Into The Top 5
By Jake Viswanath
Get Even More From Bustle — Sign Up For The Newsletter