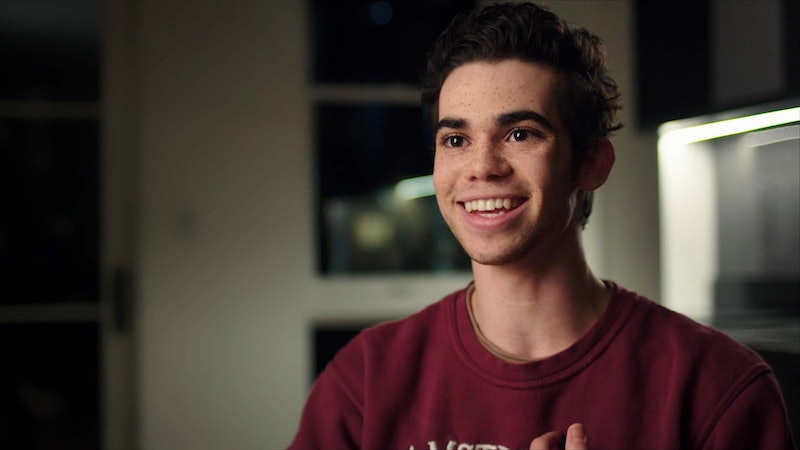 Actor Cameron Boyce died in July of 2019 from an epileptic seizure at the young age of 20. The news devastated his legions of fans, most of whom grew up watching him in a variety of roles on The Disney Channel. And Boyce's appearance in the new HBO documentary Showbiz Kids serves as a heart-wrenching reminder of a talent lost too soon.

Boyce made his first professional acting appearance in a Panic! at the Disco music video for their hit song "That Green Gentleman." He then made his feature film debut in 2008's Mirrors, and his other film credits include Eagle Eye, Grown Ups, and Grown Ups 2. But Boyce's big break came via The Disney Channel. He starred as Luke Ross on the comedy series Jessie and played Carlos, the son of Cruella De Vil in the Descendents movies and TV series. But in the lead up to his death, Boyce was taking on more grown-up gigs in shows like Paradise City and the porn-heavy Mrs. Fletcher, offering fans a glimmer of where his career could have taken him.

This week, audiences are given one more posthumous look at the former cild star in a new HBO documentary. Directed by Alex Winter (Bill of Bill and Ted, a former child actor himself), Showbiz Kids examines the pressures child actors face as they try to navigate a predatorial industry. The film features famous actors like Evan Rachel Wood, Milla Jovovich, Jada Pinkett Smith, Todd Bridges (Willis from Diff'rent Strokes), Wil Wheaton, Mara Wilson (Matilda) and Henry Thomas (Elliott from E.T.) discussing their careers, their loss of childhood, and the intense pressures placed on kids in Hollywood.

In Showbiz Kids, Boyce talks fondly of his time on Jessie and reflects on what he learned in the business. "I wasn't one of those kids who was causing trouble for anybody. I wanted to do it right, and I wanted to do it well, and I wanted people to be impressed with me," he says in the doc. Boyce also shares the piece of advice that guided his career: "Respect these people, ask questions, and be nice. And because of that, I think I was so much better off...But yeah a lot of other people didn't have that luxury."

But Boyce's experience wasn't without its pitfalls. Of being a child actor, he says, "We are professionals. We are probably a little more mature than the average kid. Socially we probably have more skills. But we don't know jack sh*t about the world. I understand that you see me in a certain way, people put you on a pedestal, people think you're really smart and witty, but that's just because you're a child actor, they don't actually know you."

Still, Boyce inherently understood that people felt like they did know them. Particularly the young kids who grew up alongside him as he came of age on Jessie. And as he transitioned into more adult roles like in the sexually-charged Mrs. Fletcher, the star kept his fanbase in mind. "I haven't done a Disney show in over a year now. But the people who watch me are still pretty young. I still want to be a good example," Boyce says in the doc. "So it's a weird balance when you are trying to break out of something, but I also feel like an example for these kids. And I take that seriously you know? How do I marry what I am doing and what I want to be doing and what people expect of me?"

Watching Boyce grapple with these questions one thing becomes abundantly clear: that Boyce was a kind, vulnerable young man whose bright light was extinguished far too soon.

More like this
Here’s What Happens To Bill & Frank In 'The Last Of Us' Video Game
By Brad Witter
Here’s Everything Coming To & Leaving Netflix In February
By Jake Viswanath
The 'Gossip Girl' Reboot Creator Is “Looking For A New Home” To Air A Potential Season 3
By Brad Witter
The 8 Best Aidan Shaw Moments On 'Sex And The City'
By Grace Wehniainen
Get Even More From Bustle — Sign Up For The Newsletter
From hair trends to relationship advice, our daily newsletter has everything you need to sound like a person who’s on TikTok, even if you aren’t.