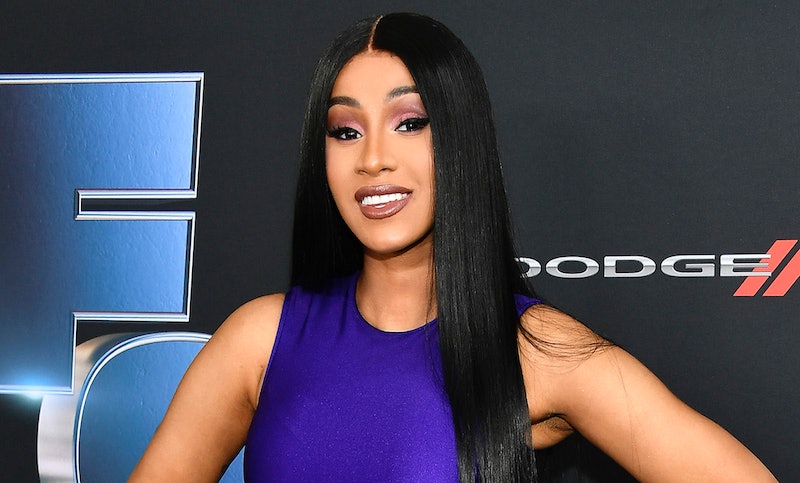 Attention all non-voters this upcoming presidential election: Cardi B has a message for voters who refuse to cast their ballots for Joe Biden, the presumptive Democratic presidential nominee. The rapper appeared on SiriusXM’s Sway in the Morning on Aug. 6 ahead of the debut of “WAP,” her new single with Megan Thee Stallion, and cited Biden as the best choice to defeat Donald Trump's chances of re-election in November. It comes after Cardi, a longtime supporter of Bernie Sanders, endorsed Biden back in April after Sanders suspended his presidential campaign.

“It’s either we go with Joe Biden or Donald Trump," Cardi said. "I’d rather go with Joe Biden." She added that she’s spoken to Biden and believes that he understands that the American people are tired of “fake promises.” Cardi then addressed supporters of Sanders and other past candidates who no longer want to vote since their preferred nominees are out. “I feel like it’s selfish,” Cardi said. “I felt like a lot of people did love Bernie Sanders… the new generation, they love Bernie Sanders but [the] motherf*ckers don’t like to vote. So, now it’s like, ‘We [didn’t] get what we wanted so [we’re] just not gonna vote at all.'”

“Well, you had the chance to vote,” she continued. “I was a little bit sad. I was pissed off when [Sanders] didn’t win but it is what it is.” She added that Sanders' endorsement of Biden swayed her decision. “I just want something new. Even if Trump wins again it’s still gonna be something new because he’s very unpredictable. It’s always some new shit with this motherf*cker. I just want to experience something new with someone different."

The rapper also expressed excitement about the possibility of a Black female vice president. “It’s great. Ain’t nobody keep it more realer than a Black woman,” Cardi said. “Nobody’s gonna tell you more shit like it is than a Black woman.”

Cardi, who has emerged as a staunch political voice for the new generation, has long been vocal about government and the importance of elections. The “WAP” rapper last addressed the significance of local elections in May, in the wake of nationwide Black Lives Matter protests that stemmed from the killing of George Floyd. Touching on police brutality and the riots, Cardi urged people to take political action on the local level on Instagram. “Another way for people to take power — I don’t wanna make everything political, but it is what it is — it’s by voting," she said, highlighting elections for mayors, judges, and district attorneys. “The people that are voting for these people are most likely cops… that’s why every single time that some f*ck shit like this happens, it goes to their favor… because these people have the power to prosecute these cops.”

Cardi B has spoken: vote.

More like this
Matt Hancock’s TikTok Is The Most Matt Hancock Thing Ever
By Sam Ramsden
Gillian Anderson's New Netflix Drama Is *Nothing* Like 'Sex Education'
By Frances Stewart
Eurovision Has Been Given A Whole New Look Ahead Of Its Liverpool Debut
By Bustle UK
Twitter Is Having A Meltdown Over Buying Beyoncé Renaissance Tour Tickets
By Jake Viswanath
Get Even More From Bustle — Sign Up For The Newsletter
From hair trends to relationship advice, our daily newsletter has everything you need to sound like a person who’s on TikTok, even if you aren’t.