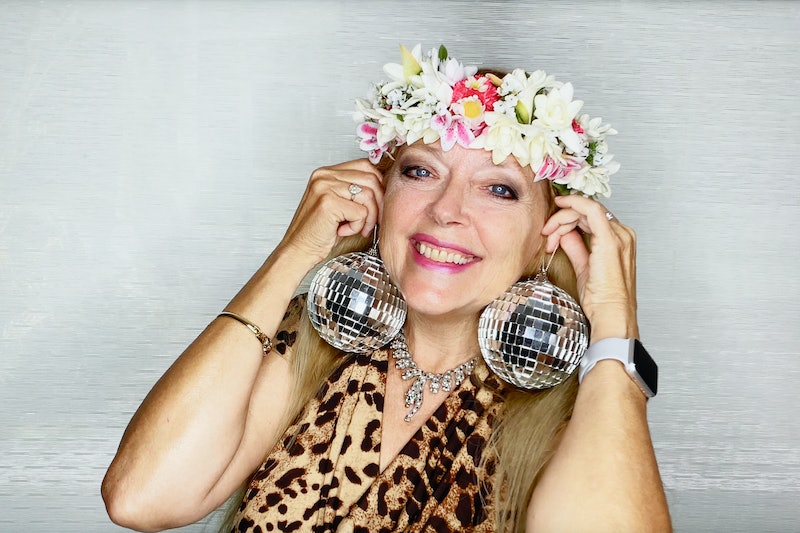 Despite previously stating that Don Lewis' family and friends were pulling a "publicity stunt" during the premiere of the reality competition, Carole Baskin hopes their Dancing With the Stars ad helps find her ex-husband. The Big Cat Rescue founder shared her thoughts on the commercial — in which Lewis' daughters, former assistant and lawyer mentioned Baskin by name — while chatting with TMZ after dance rehearsals. And, a few days after the fact, she's more on board.

When asked if she hoped the commercial would lead to answers about the incident, Baskin responded, "Yes. That would be wonderful, if that was a side-benefit [of her time on the show]." On Sep. 14, Lewis' family ran a commercial in the Florida area where he and Baskin are from, asking viewers to provide any information they may have about Lewis' sudden disappearance in 1997.

"Do you know who did this, or if Carole Baskin was involved?" the family's lawyer John M. Phillips says in the clip, before his loved ones offer a $100,000 reward for anything that may help solve the case, and directing viewers to a tip line to share any information. The Lewis family have long suspected Baskin of having some kind of involvement in his disappearance, though the Big Cat Rescue founder has never been charged. (Lewis was declared dead in 2002.) She has repeatedly denied having any involvement in Lewis' disappearance, though the popularity of Tiger King has inspired a resurgence of accusations against her.

The ad quickly made headlines alongside her DWTS debut performance, but the night it aired, Baskin told Entertainment Tonight that she wasn't particularly bothered by the commercial or the continued accusations from her ex-husband's family. "I have not seen the ad. I am not at all surprised," she said at the time. "It's just been a huge publicity stunt on their part so what more could they possibly do than that?"

Instead, Baskin noted that she sees any attention she gets from competing on DWTS — positive or negative — as a way to promote the Big Cat Rescue and her mission to outlaw the ownership of exotic animals. "I'm not worried about what people say because even when they're saying things that [are] negative, it's keeping the conversation out there [about cats] in the public eye," she explained. "As long as I can keep that conversation out there, I can keep the cats in the spotlight and that's my goal."

Already, she's making strides on that front. On Sep. 17, Variety reported that Baskin will executive produce and star in a series about animal exploitation in collaboration with ITV America’s Thinkfactory Media. In the series, Baskin and her husband Howard, along with other animal rights activists, will expose people who engage in animal cruelty by "spotlight[ing] the histories, lawsuits and animal rights violations associated with various organizations," according to the outlet.

"This is a chance for us to use our new platform to battle the everyday evils facing big cats and so many other animals," the Baskins said in a joint statement. "Working with Thinkfactory on this show will help us further our life’s mission, while bringing important stories and information to ‘cool cats and kittens’ across the country." The couple are hoping to bring an end to their "20-year war" against people who profit from the exploitation of animals, and outlaw the ownership of big cats in the United States once and for all.