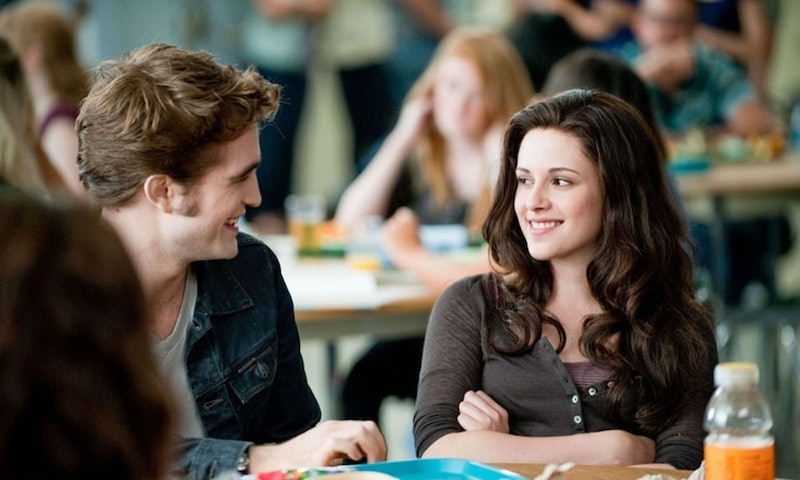 There is less than a month to go until Midnight Sun brings Edward's side of the story to bookshelves everywhere, and some Twilight fans are hoping that a film adaptation will follow — including one very famous director. During a recent interview, Twilight director Catherine Hardwicke admitted that a Midnight Sun movie would be "fun." Although, unfortunately, she doesn't think it would be possible to bring the franchise's original stars back to reprise their roles.

The topic of a Midnight Sun film first came up when Hardwicke was asked if she thought Twilight could be recut to show Edward and Bella's romance from his perspective, just like the upcoming book will. "[It would be] difficult," Hardwicke told Entertainment Tonight. "We did stay a lot more in Bella's head." Instead, she stated that a Midnight Sun adaptation would be "another film" entirely. "[It] would be fun. It would be fascinating," the director said. One thing she did note, however, is the difficulty of getting Robert Pattinson and Kristen Stewart to reprise their roles as Edward and Bella, respectively, for a Midnight Sun film. "Rob is Batman now... and Kristen is in a million beautiful projects," she said. "Who knows what would happen."

Midnight Sun was originally scheduled to be released back in 2008, before a partial manuscript was leaked online. However, in May 2020, author Stephanie Meyer revealed that she decided to finally release the book in order to help distract fans from the ongoing coronavirus pandemic and life in quarantine. "I hope this book gives my readers a little pleasure to anticipate and, after it arrives, a chance to live in an imaginary world for a while," she said in a press release at the time.

Though it's been a little over a decade since the first Twilight movie was released, the franchise still holds a special place in fans' hearts — and in Hardwicke's memories as well. During her interview with ET, the director recalled appearing at Comic-Con with the cast of Twilight in 2008. "That was absolutely crazy... Our whole panel, we stepped out on that stage and people were just going crazy," Hardwicke recounted. "People treated Rob and Kristen like rock stars... Everybody was about to faint. It was so thrilling."

The fan frenzy has always impressed Hardwicke; in 2018, the director recalled working on a Twilight tour in Portland, Oregon, and being unable to stump fans with event the most difficult trivia questions about the movie. "I did that [the tour], testing people," she said during an interview with Bustle. "I’m like, “OK, who says in the movie, 'Burrito my friend?' It’s a throwaway line and people go, ‘Mike Welch in the cafeteria scene.’ I’m like, ‘What?’"

And all these years later, Hardwicke is still delighted by the fact that the movie remains so beloved by so many people. "This is the one movie that I’ve work on that people really know the details of all the effort we put into it, all the layers," she told Bustle. "I was doing something with Eli Roth... and he told me that Quentin Tarantino had done an interview and he said that he just loved Twilight because it made him feel like a 13 year old girl."