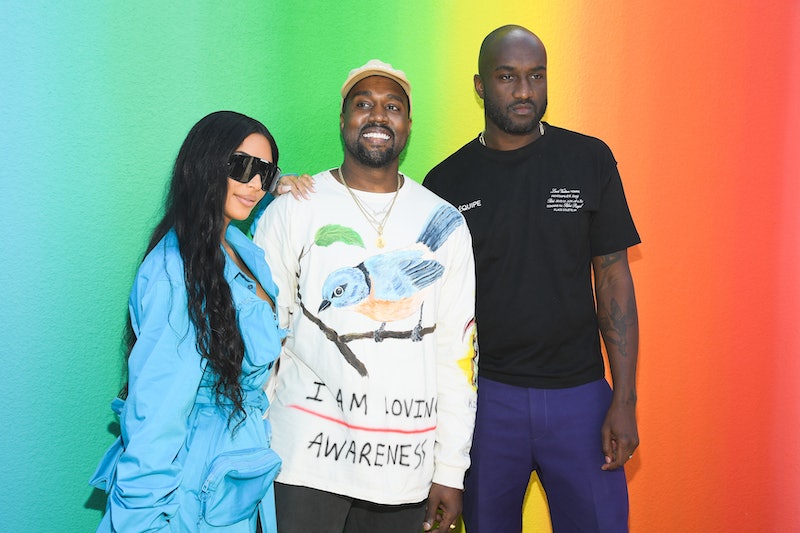 Virgil Abloh has left an immeasurable legacy. When Abloh’s family announced on Nov. 28 that the 41-year-old fashion designer had died after privately battling a “rare” and “aggressive” cancer since 2019, stars like Kim Kardashian, Kanye West, Kendall Jenner, Gigi Hadid, Frank Ocean, and more from the worlds of fashion, art, and music quickly paid tribute to the trailblazing designer.

Abloh chose to keep his battle with cardiac angiosarcoma private and secretly underwent several treatments while “helming several significant institutions,” including his posts as the founder of streetwear giant Off-White and the first Black artistic director of Louis Vuitton menswear. “Through it all, his work ethic, infinite curiosity, and optimism never wavered,” Abloh’s family wrote in a statement posted for his 7 million Instagram followers. “Virgil was driven by his dedication to his craft and to his mission to open doors for others and create pathways for greater equality in art and design. He often said, ‘Everything I do is for the 17-year-old version of myself,’ believing deeply in the power of art to inspire future generations.”

In celebration of his life and groundbrekaing achievements, Louis Vuitton will present Abloh’s final collection for the fashion house with a presentation in Miami on Nov. 30. Chairman and CEO Michael Burke said in a statement that it was Abloh’s wish for the show to be held. “I am honored to have called him my friend,” he wrote. Abloh had many famous close friends, some of whom he worked with repeatedly. As made clear by his collaborators and peers, his loss will be felt deeply in the fashion community.

West dedicated his Nov. 28 Sunday Service to his close friend and collaborator: “In loving memory of Virgil Abloh, the creative director of Donda,” West wrote in a message that stayed on the website after the service. Before assuming his posts at Off-White and Louis Vuitton, Abloh was the creative director of West’s company Donda and earned a Grammy nomination for the artwork of the rapper’s Watch the Throne album with Jay-Z. During the livestream, West’s choir performed an emotional version of Adele’s hit “Easy On Me” in tribute to Abloh, changing the chorus to “Go easy on me, father / I am still your child, and I need a chance to feel your love around.”

Ocean paid tribute to Abloh on his Instagram Stories, posting photos of them at the 2021 Met Gala and recalling an inspiring phone call between them.

The “Pyramids” singer also wrote about the impact Abloh left on his late brother Ryan, who died in August 2020 at just 18 years old. “When Ryan went to his prom you got him some pieces from your new collection at LV and he was GEEKed,” he wrote. “When my brother passed I never said anything because it was way too much but he loved you and really looked up to you. He was going to fashion school and everything. He wanted to be a designer. My fam was proud of you like you were our family. I know grief is love that you don’t get to express so this is an attempt at expressing it. Love you V. You’re a hero.”

Fashion designers from across the globe paid tribute to Abloh, acknowledging the enormous impact he left in the field. Marc Jacobs commented on Abloh’s death announcement, writing, “May you Rest In Peace and Power dear Virgil.” Burberry’s chief creative officer Riccardo Tisci posted a photo with Abloh, remembering him as a “kind young guy, who stayed humble to the whole world even though he was able to visualize and read the world itself.”

Donatella Versace also penned a loving tribute, posting a photo with the designer and Naomi Campbell. “Virgil, I am lost for words,” she said. “The world has lost a fashion superstar. An innovator. A creator for the history books.”

More like this
Everything You Need To Know About Kanye's Post-Kardashian Dating Life
By Bustle Editors
Taylor Lautner Thought Taylor Swift's 2009 VMAs Interruption Was A "Skit"
By Alyssa Lapid
Gigi Hadid Gave Up One Surprising Thing After Having A Baby With Zayn Malik
By Alyssa Lapid
Rihanna’s Collaborators, Ranked By How Likely They Are To Perform At The Super Bowl
By Jake Viswanath
Get Even More From Bustle — Sign Up For The Newsletter
From hair trends to relationship advice, our daily newsletter has everything you need to sound like a person who’s on TikTok, even if you aren’t.

This article was originally published on November 29, 2021