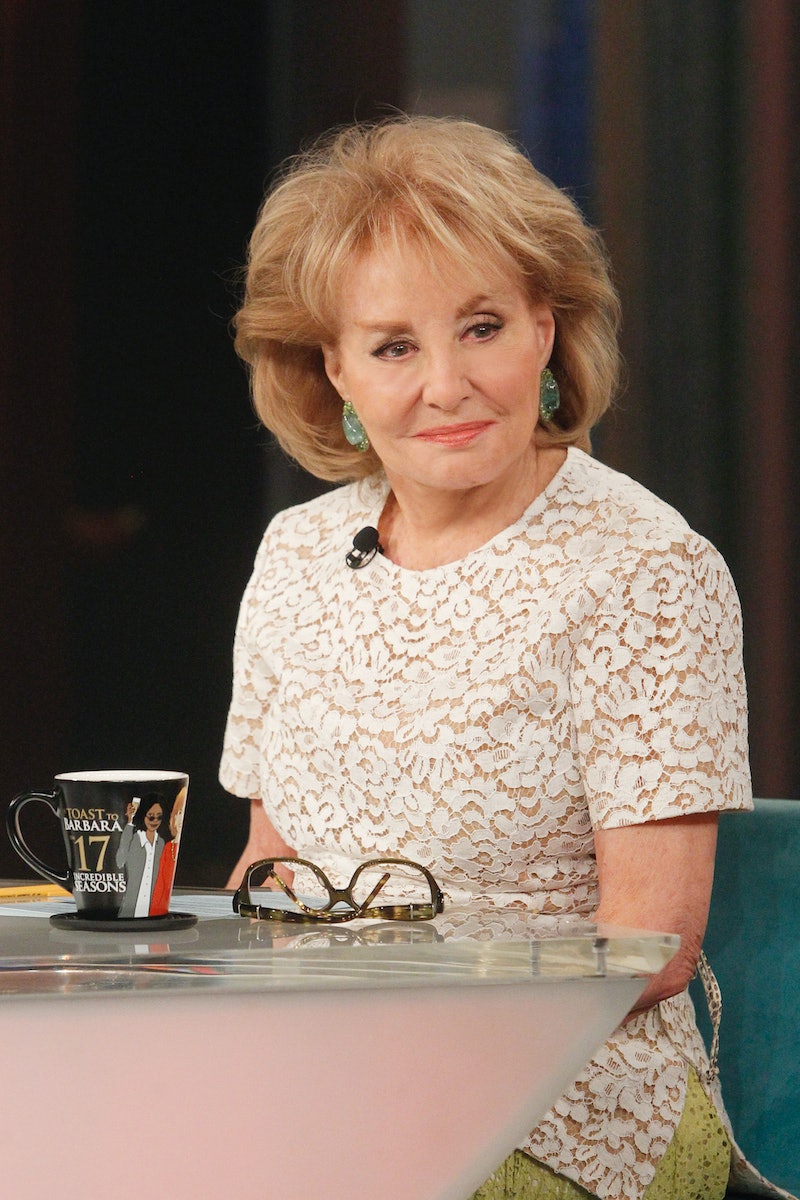 Last year ended with the loss of Betty White, and sadly, 2022 closed with the departure of another legend. Celebrated journalist Barbara Walters has died at age 93. Her death was reported on Dec. 30 by ABC News, the company that hired her as the first female anchor of an evening news program in 1976. The New York Times later reported that she passed in her Manhattan home and that her publicist, Cindi Berger, confirmed her death but not the cause.

Walters established herself as a journalism icon over her groundbreaking 50-year career. From co-anchoring the ABC Evening News, she went on to produce and co-host the long-running newsmagazine 20/20. Later, she created, produced, and co-hosted The View before finally retiring in 2014. She was “a true legend, a pioneer not just for women in journalism but for journalism itself,” as Bob Iger, the CEO of The Walt Disney Company (ABC News’ parent company), put it in a statement. He also called her “a one-of-a-kind reporter who landed many of the most important interviews of our time, from heads of state to the biggest celebrities and sports icons.”

Iger wasn’t the only one to celebrate Walters and her impact. On Jan. 3, Walters’ original The View co-hosts Joy Behar, Meredith Vieira, Star Jones, and Debbie Matenopoulos reunited to pay tribute to their colleague. Jones remembered her as the “best gossiper,” recalling some of their most juicy conversations. “The best seat in the house at any social event was next to Barbara Walters because she could tell you everything about everybody in the room,” she said. “We ended up at a dinner one time with Prince Albert and had a whole conversation about ‘The Thong Song.’” Matenopoulos said Walters “single-handedly changed” her life. “She was tough on me, but I appreciated it because I learned everything from her,” she said. “It was like taking a masterclass in journalism.”

Later in the episode, former View co-hosts Sherri Shepherd, Lisa Ling, and Elisabeth Hasselbeck also appeared to remember Walters, with Hasselbeck calling her a “TV mom” and “mentor,” and Shepherd recalling how defensive she got during Walters’ 2009 interview with Ann Coulter. “I didn’t like the way she was talking to Barbara. You don’t talk to Barbara like that!” she explained. Finally, the show’s current moderator and longtime panelist Whoopi Goldberg celebrated Walters’ historic impact on the media world. “The industry had to respect her,” she said. “She did not allow them not to respect her. Like all firsts, she’s the first, and there are many of us duplicates. But there will never be another Barbara Walters.”

On Twitter, countless celebrities, colleagues, and fans paid tribute to the late journalist. Colleagues, in particular, highlighted her impressive grit and accomplishments, calling her “tough,” “courageous,” a “trailblazer,” and “The Blueprint.”

Numerous figures from the world of sports and entertainment also applauded Walters. The likes of NBA great Kareem Abdul-Jabbar and actors Kerry Washington, Jennifer Hudson, and George Takei were among those who tweeted about her.

Several celebrities shared their experiences being interviewed by Walters. Activist Monica Lewinsky had a particularly funny memory of Walters telling her that shoplifting would have been a preferable way of getting in trouble compared to the Bill Clinton scandal.

Over the years, Walters formed close bonds with many famous people, and several of them wrote touching messages after her death. Musician Paul McCartney, who is married to her cousin Nancy Shevell, called the two women’s relationship “deep” and “loving” and said he was “proud to share” in some of their “special moments.” Meanwhile, actor Hugh Jackman shared that Walters threw “some of the most memorable dinner parties” and let heaven know that “Barbara’s coming to spice things up.”

Oprah Winfrey — an icon herself — shared her tribute on Instagram. Her poignant words called Walters a “role model” and laid out the impact Walters had on her and so many others. “Without Barbara Walters there wouldn’t have been me—nor any other woman you see on evening, morning, and daily news,” she wrote, in part.

More like this
'RHOSLC’s Heather & Whitney Are Still On A “Friendship Break” After Season 3 Reunion
By Jake Viswanath
RHOP’s Robyn Dixon Explained Why Juan Paid For Another Woman's Hotel Room
By Brad Witter
Ashton Kutcher Wants Danny Masterson “To Be Found Innocent” In Rape Retrial
By Jake Viswanath
The 2023 Super Bowl Commercials Feature A 'Breaking Bad' Reunion & Missy Elliott
By Alyssa Lapid
Get Even More From Bustle — Sign Up For The Newsletter
From hair trends to relationship advice, our daily newsletter has everything you need to sound like a person who’s on TikTok, even if you aren’t.

This article was originally published on Dec. 31, 2022