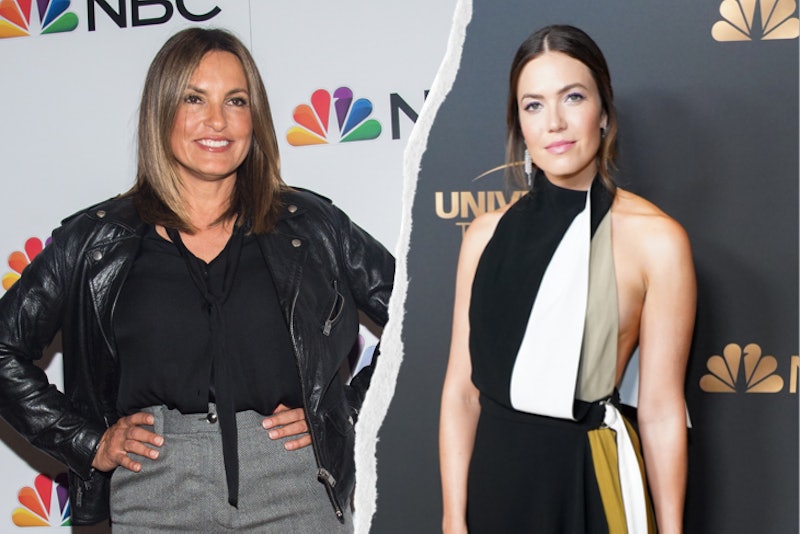 A group of over 100 writers, directors, producers, and actors have called on NBC to reschedule Donald Trump’s town hall scheduled for the evening of Thursday, Oct. 15. The town hall event coincides with Democratic presidential nominee Joe Biden’s very own telecast, and, most importantly, was announced as a last minute rival to Biden's town hall after Trump backed out of a previously scheduled debate. Network stars like This Is Us' Mandy Moore and Law & Order: SVU's Mariska Hargitay, and other artists signed a petition asking Comcast CEO Brian Roberts and NBCUniversal chairmen Jeff Shell and Cesar Conde to oppose Trump’s hour-long town hall on NBC, MSNBC, and CNBC, which will bleed into the first hour of Biden’s own town hall on ABC.

Per the full letter, published by The Hollywood Reporter, the celebs maintain that the executives are "enabling the president's bad behavior while undercutting the Presidential Debate Commission and doing a disservice to the American public." The petition, also signed by Ava DuVernay, Chris Meloni, Sterling K. Brown, Ryan Murphy, Milo Ventimiglia, and more, claims that "this is not a partisan issue," but “about the political health of our democracy.” The letter reads, in part, “We are simply asking that NBC air the President’s town hall either before or after Vice President Biden’s so that American voters can have the opportunity to watch both.”

“We understand the necessities of business, especially in this difficult time,” it concludes. “But we believe there are larger issues of civic responsibility at stake here.”

The dual town halls come after the cancellation of the second presidential debate, initially scheduled for Oct. 15. Trump pulled out of the event after it was changed to a virtual debate in the wake of his positive COVID-19 diagnosis, calling the idea “ridiculous.” In turn, Biden agreed to a town hall on ABC to answer questions from voters; however, Trump announced his very own town hall soon after — this time on another network and during a conflicting time. ABC News chief anchor George Stephanopoulos will moderate Biden’s event, while NBC News anchor Savannah Guthrie will moderate Trump’s event.

Prior to the petition, many current and former NBC staff voiced their opposition to Trump’s town hall. Katie Couric reiterated that it was “a bad decision” in a tweet on Oct. 14, writing, “Having dueling town halls is bad for democracy-voters should be able to watch both and I don’t think many will. This will be good for Trump because people like to watch his unpredictability.” Vivian Schiller, a former NBC News executive, also called it “shameful” on Twitter, while Mark Lukasiewicz, a former NBC News producer, also tweeted that it would be a “bad result for American voters.” On Twitter, fans started calling for an NBC News boycott and #NBCBlackout was trending hours before the events.

NBC News Group chairman responded to the concerns on Thursday, releasing a statement committing to going forward with the Trump town hall as previously scheduled. "Our decision is motivated only by fairness, not business considerations," Cesar Conde said in part, per The Hollywood Reporter. According to Conde, NBC News sees their town hall as a sort of response to a Biden town hall that aired on NBC last week. "We aired a town hall with Vice President Biden on Oct. 5 at 8p.m. If we were to move our town hall with President Trump to a later timeslot we would be violating our commitment to offer campaigns access to teh same audience and the same forum."

Biden and Trump's rival town halls will begin at 8p.m. ET on ABC and NBC, respectively.

More like this
Kim Kardashian Remembers Her Last Words To Death Row Victim Brandon Bernard
By Jake Viswanath
Cardi B Explains To David Letterman Why She Uses Her Star Power For Politics
By Jake Viswanath
What Is Barack Obama’s Net Worth? He Makes *Way* More Now As An Ex-President
By Hugh McIntyre
'Derry Girls' Creator Teases Exciting Spin-Off Starring These Three Characters
By Olivia-Anne Cleary
Get Even More From Bustle — Sign Up For The Newsletter