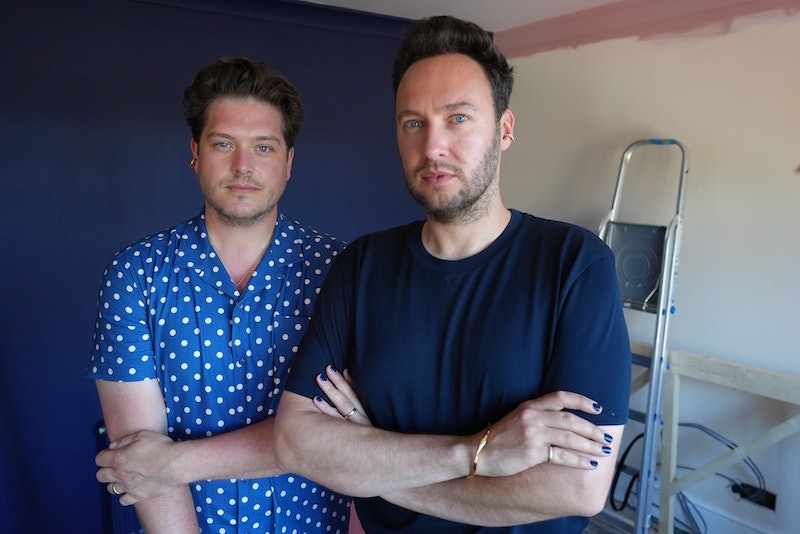 Readers of a certain age will most likely recall the iconic home-DIY series Changing Rooms, which became a TV staple for many in the ‘90s and ‘00s. After being given a contemporary makeover, the Channel 4 hit is back on our screens for a modern-day reboot. Appearing in the new series are interior designers Jordan Cluroe and Russell Whitehead of 2LG Studio, both of whom will be on hand to offer their expertise. But, what is there to know about the designer’s lives off-screen? You can find everything you need to know about Cluroe and Whitehead below.

Who are Jordan Cluroe & Russell Whitehead?

Cluroe and Whitehead are professional interior designers and the co-founders of the South East London-based 2LG Studio interior design company. As noted on their official website, the 2LG Studio offers “residential and commercial Interiors, design consultancy and styling.”

Creative solutions that make the best of your home is their specialty. As is helping others find their interior style form, which they also turned into a book, Making Living Lovely, published by Thames & Hudson in 2020.

Per the Evening Standard, Cluroe and Whitehead have also both previously trained as actors, having attended the Liverpool Institute for Performing Arts and Royal Academy of Dramatic Art, respectively.

Cluroe and Whitehead tied the knot in 2011. During an interview with The Other Saint, the couple revealed they first met at a friend’s party. At the time, both Cluroe and Whitehead were working as successful actors in the West End and bonded over a shared interest in interior design.

Discussing the challenges of running a successful business together as a married couple, Cluroe revealed how the pair “don't shy away” from making big work-related decisions. “...we love a challenge and we love spending our time together. Obviously, that has its moments, as in any relationship, but the key has been to talk often and not be afraid to speak our minds,” he said.

The couple have two official accounts: one for work, and one for them. Fans can keep up to date with the duo’s work on their official 2LG Studio Instagram account, which captures some of the beautiful spaces the duo curates. Expect bold use of colour, sumptuous shapes, and very Instagram-friendly spaces.

There is also @2lovelygays where Cluroe & Whitehead describe as a “fashion and lifestyle” account, capturing insights into their bright world through their (very fabulous) wardrobes.

What are Jordan Cluroe & Russell Whitehead know for?

As mentioned, Cluroe and Whitehead have been working away in the interior design world for years, making a name for themselves. Joining Channel 4’s Changing Rooms, their popularity is sure to skyrocket. However, the series isn’t Cluroe’s first foray into interior designs TV. In 2014 he was crowned the runner-up of the BBC’s Great Interior Design Challenge.

Cluroe’s success on the BBC series is what inspired his and Whitehead’s career pivot into professional interior design. Their skillset in this field is set to become an integral part of Channel 4’s Changing Rooms reboot, which follows homeowners as they work against the clock to renovate a room in each other’s houses.

“The childhood versions of ourselves are mind blown to be part of the new Changing Rooms,” Cluroe and Whitehead said of their Channel 4 gig. “Creativity is powerful so we love that Changing Rooms is back because, in many ways, it was the beginning of our own creative journeys. How incredible that we get to a part of the next step,” the pair added.