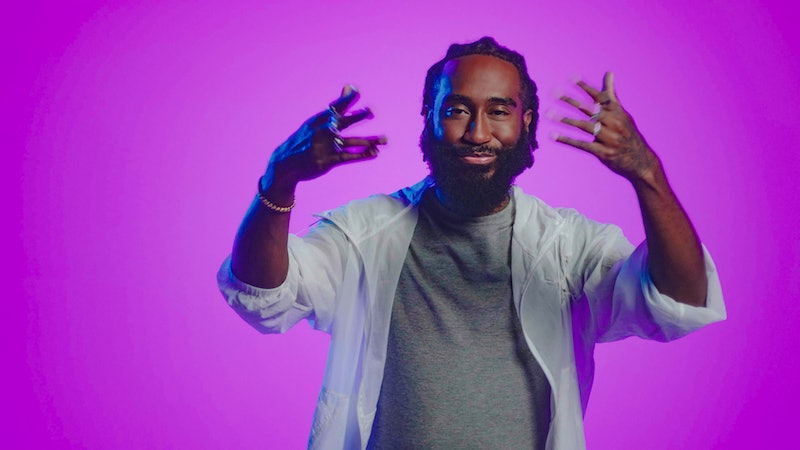 Featuring players who are “all single and ready to mingle,” Netflix’s The Circle Season 5 includes more flirting, drama — and, of course, catfishing — than ever. Although 29-year-old New Jersey native Chaz Alvarez, aka Chaz Lawery, aka Shampoo Papi, is entering The Circle as himself, he’s including “just a little bit of embellishment,” including his profession and relationship status. Though his fellow competitors know him as “Nurse Chaz,” in reality, he “didn’t finish” nursing school, joking on the show that he chose that as his fake profession to “diagnose these players with a medical disease that I call bullsh*t.”

According to Netflix’s description, Chaz’s “high energy and never-quit attitude” is going to help him “laugh his way to the top.” Here’s everything to know about him as he vies for the $100,000 cash prize and title of top influencer.

Chaz From The Circle’s Job

Chaz is the owner of Los Angeles-based Shampoo Papi Mobile Detailing, which allows clients to “skip the hassle” of going to a car wash because he travels to them. According to his website, Chaz currently services The Valley, Malibu, Noho, Burbank, and Glendale, and he also turned his business into an independent streaming series he dropped via Apple TV and iTunes. “I'm a hard working man. I've been at this for a few years now. I've never given up,” he captioned a May 2021 Instagram post. “No matter how hard this journey has been. I have always stayed true to myself. I will continue to be myself. I have been building my name and brand from the ground up. I'm going straight to the top.”

In an October 2019 interview with VoyageLA, Chaz opened up more about the “many storms” he’s been through in his life. “After failing school, dropping out, and quitting my job I decided to go into business for myself,” he shared. “I was in the worst place of my life thus far, I felt like a total failure. I hated who I was. I sat in misery for months on the couch watching my fiancé work double the time to take care of both of us. If there was a definition of empty it would be me.”

At the time, he described his job as detailing cars and cleaning houses, adding, “I’m mostly known for my entertaining videos that spread like wildfire on social media.”

On Instagram, Chaz leans into his Shampoo Papi persona and uses his account to show off his personal style and promote his business, which he’s compared to MTV’s Pimp My Ride. In fact, the show’s host Xzibit even sent him a video message, which he posted in November 2021. “I can't thank u enough,” Chaz wrote, tagging the rapper. “I am going to keep working hard at building my business, brand and name.” The same month, he thanked Lamborghini for sending a gift to celebrate his Shampoo Papi series winning two independent TV show awards in India. One of Chaz’s Instagram Stories highlights is also dedicated to the time he served as a GQ hair model for a video in which a master barber demonstrated how to achieve Donald Glover’s haircut.

Chaz From The Circle’s Fiancé

In the VoyageLA article from 2019, Chaz described the challenges of having to quit his job “while being in the middle of paying for a wedding.” On The Circle, he said that he was still “engaged to the best man in the world” — though he was playing “single as a Pringle.” There’s currently no sign of a significant other on Chaz’s Instagram account though, so his current relationship status remains unclear.

More like this
Ozzie’s Coming Out Scene With Kitty On 'That ’90s Show' Has Twitter Sobbing
By Brad Witter
Andy Cohen Apologized To Larsa Pippen After A 'RHOM' Season 5 Reunion Dust-Up
By Brad Witter
Love Is Blind’s Natalie Claims Shayne Signed Up For 'Perfect Match' While They Were “Still Together”
By Brad Witter
'Love Is Blind: After The Altar' Season 3 Has A Release Date & It's Very Soon
By Grace Wehniainen
Get Even More From Bustle — Sign Up For The Newsletter
From hair trends to relationship advice, our daily newsletter has everything you need to sound like a person who’s on TikTok, even if you aren’t.