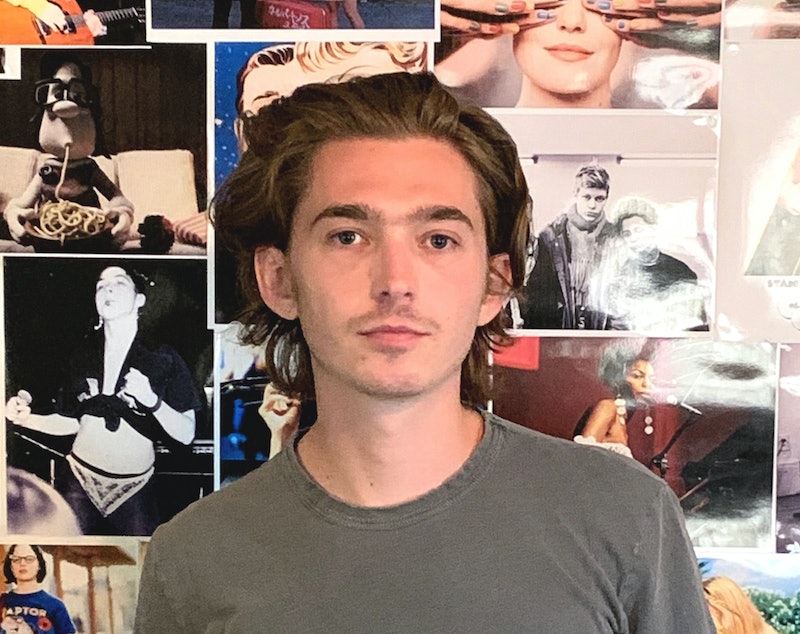 When celebrities (virtually) hang out with Bustle writers, we want to give them the chance to leave their mark. Literally. So we hand them a pen, a piece of paper, a few questions, and ask them to get creative. This time, Chemical Hearts star Austin Abrams is leaving his mark in the Bustle Booth.

Austin Abrams can't leave high school. The 23-year-old actor first broke out in the 2015 adaptation of John Green's high school drama Paper Towns, then made his star turn last year in HBO’s Euphoria, playing a sweet, shy teen in the show’s otherwise racy world of sex and substances. Now Abrams is back playing another heartfelt high school romantic in Amazon’s Chemical Hearts. But even though Abrams' work frequently has him revisiting the tender years of adolescence, he hasn't lost his fascination with exploring its highs and lows. “When you're a teen you're really figuring things out, you're doing everything for the first time and everything in your life is shifting,” Abrams tells Bustle. “Your brain chemistry is just changing so rapidly.”

Chemical Hearts is about all those firsts. The film follows Henry Page (Abrams), on what starts out as a rather unremarkable senior year. Everything changes when he meets the mysterious, grief-stricken Grace Town (Lili Reinhart). The film has all the usual high school movie beats: parties, a school paper, an indie soundtrack full of Beach House hits. But Abrams brings an earnestness to the role that is proving to be his signature. In Abrams' hands, Henry never feels like a caricature of a high school boy — especially in all-too-relatable moments like when he finds himself uncomfortably high and out of his depths at a massive party, or trying to make losing his virginity super "sexy." (Naturally, he fails.)

But it was his sincere portrayal of the adorably awkward Ethan in Euphoria that cemented him as the pre-eminent soft boy of the moment. It took a full season for Ethan to get Kat (Barbie Ferreira) to really notice him, and in that time Abrams perfectly captured the angst of having a high school crush. “Most of the time, Ethan is just nervous to be talking to Kat in general,” Abrams says with a laugh. But it was Abrams’ own nerves that were actually shining through. With no rehearsals on Euphoria, the raw vulnerability it takes to really open up to someone creatively mirrored what was going on on-screen. “You're watching pretty much Barbie and my relationship develop as it actually did through Ethan and Kat.”

With Euphoria already renewed for a second season, Abrams is in no rush to leave high school behind. The actor — whose answers to the questionnaire below prove he's just as perfectly soft IRL as he is on-screen — still has a lot to learn from his adolescent characters. “Acting requires a lot of self reflection,” says Abrams. “It’s doing your best to understand other individuals, which then forces you to understand yourself a lot more. That's what makes this job so enjoyable.”