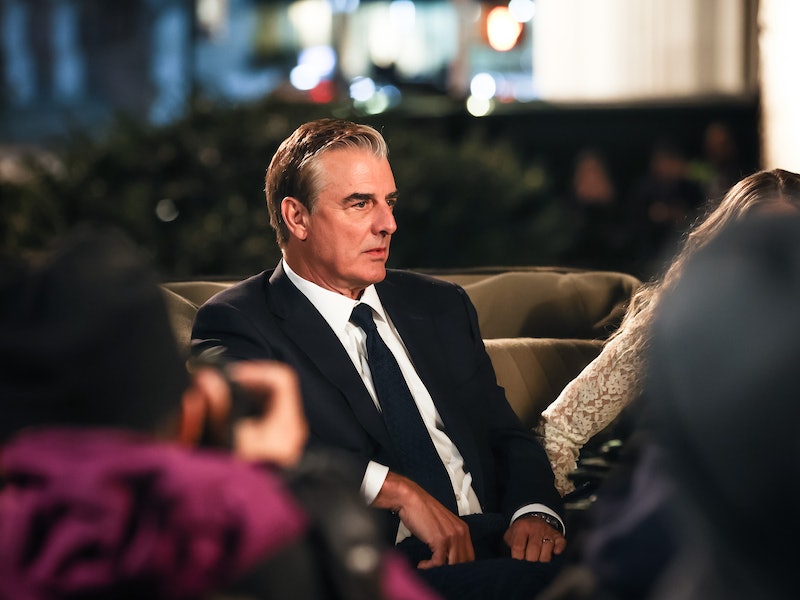 Trigger warning: This piece contains descriptions of sexual assault that may be disturbing to some readers.

Chris Noth has been dropped from his talent agency amid several allegations of sexual misconduct. Shortly after two rape accusations against the actor broke on Dec. 16 in The Hollywood Reporter, his former Law & Order co-star Zoe Lister-Jones claimed via Instagram that Noth was inappropriate with her on the set of the Dick Wolf-created drama, which they both appeared on in 2005. While he’s yet to respond to Lister-Jones, Noth denied the initial two allegations. Bustle contacted Noth’s representatives for comment on Lister-Jones’ statements and THR’s report and will update this article accordingly.

In the revealing and graphic THR article, two women, who reportedly don’t know one another, alleged the Sex and the City actor wooed them before assaulting them in his apartments. THR allowed both women to use pseudonyms to protect their identities. Zoe, now 40, alleged Noth assaulted her in his Los Angeles residence in 2004. Lily, now 31, claimed Noth assaulted her in 2015 in his New York City home. Noth denied the accusations via a statement to THR, saying in part, “These stories could’ve been from 30 years ago or 30 days ago — no always means no — that is a line I did not cross.”

The women stated that after trying to forget about the alleged incidents, Noth’s resurgence in the SATC reboot And Just Like That triggered them and pushed them to speak out. Zoe and Lily reportedly approached the publication separately and months apart in the second half of 2021.

THR detailed Zoe’s account first. Back in 2004, she was working for an unnamed business that counted Noth as a client. At the time, he was starring in the original Sex and the City and was a major star. She claimed that after flirting with her at the office, he got her phone number and left her flirtatious voicemails.

Zoe then said Noth invited her to join him at a rooftop pool in West Hollywood, and she and a friend took him up on that offer. After the three spent time together, Zoe said Noth left her with a book as he retreated to his apartment. When Zoe went to return it a short time later, they kissed, and she said she wasn’t initially alarmed. Moments later, Noth allegedly “pulled her toward him, moved her toward the bed, pulled off her shorts and bikini bottom, and began to rape her from behind” as she faced a mirror.

Zoe recalled the alleged incident being “very painful,” causing her to yell, “Stop!” “And he didn’t,” she claimed in the THR piece. She continued, “I said, ‘Can you at least get a condom?’ and he laughed at me.”

When the alleged sexual assault was over, Zoe went to an apartment in the same building where her friend lived. She said she had blood on her shirt, and when her friend wanted to know what happened, she replied, “I just want to go home.” Zoe told THR that her friends noticed that she was acting strange. While she said she didn’t share exactly what happened, she was taken to Cedars-Sinai Hospital and told the medical professionals that she was sexually assaulted without naming Noth.

However, Zoe said she told her boss everything but requested they not share the information with anyone. Her employer acquiesced and didn’t report the actor for the alleged assault. Zoe’s claims were verified by THR after speaking to her friends and boss mentioned in the story.

Lily’s story also involved a date with Noth that allegedly turned into an assault after she joined the actor in his apartment. This time, the alleged incident took place in New York City in 2015. Then a waitress at NYC hotspot No.8, Lily said she was “star-struck” by the SATC star and excited when he asked for her number and invited her to dinner.

After getting drinks at a restaurant prominently featured in SATC, Noth reportedly invited Lily back to his nearby apartment, where they could continue drinking. (THR noted Noth has maintained a residence in Greenwich Village since 1994.) “I thought, ‘We’re going to drink whiskey and talk about his acting career.’ It sounds so stupid,” she recalled.

“He tried to make out with me. I cautiously entertained it,” Lily continued. “He kept trying and trying and trying, and I should have said no more firmly and left. And then the next thing I knew, he pulled down his pants and he was standing in front of me.” Lily then claimed Noth forced his genitalia in her mouth. From there, Lily alleged, “He was having sex with me from the back in a chair.” She recalled the alleged incident taking place in front of a mirror. “I was kind of crying as it happened.”

After, Lily said she ordered an Uber and called a friend from the car, detailing the incident in near-hysterics. While her friend encouraged her to go to the police, Lily didn’t and apparently began downplaying the entire event in her own mind and to friends.

Lily also told THR about how Noth apparently responded when she asked him about his wife (he has been married to actor Tara Wilson since 2012). She said he replied, “Marriage is a sham. Monogamy is not real.”

THR examined texts between Lily and Noth that were sent after the alleged assault, including one where the actor typed: “By the way I have to ask did you enjoy our night last week. I thought it was a lot of fun but I wasn’t quite sure how you felt.” She responded, “Not to go into specifics over text message, but I did feel slightly used… Perhaps this is better as a phone conversation but I can’t talk at the moment.” The two continued to correspond for some time but never met again. At one point, he reportedly texted her, “Come have a drink with me before I leave [town]. Oh mysterious one… where did you go.” The journalists behind the report read several messages between the two and confirmed Lily’s story with the friend she called in 2015.

When reached for comment, Noth gave THR the following statement:

“The accusations against me made by individuals I met years, even decades, ago are categorically false. These stories could’ve been from 30 years ago or 30 days ago — no always means no — that is a line I did not cross. The encounters were consensual. It’s difficult not to question the timing of these stories coming out. I don’t know for certain why they are surfacing now, but I do know this: I did not assault these women.”

Mere hours after the article was published, Lister-Jones posted an Instagram Story recounting an alleged experience working with Noth in nightclubs and on Law & Order.

“Last week, my friend asked me how I felt about Mr Big’s death on And Just Like That, and I said, honestly, I felt relieved,” the actor and filmmaker wrote. “He asked why and I told him I couldn’t separate the actor from the man, and the man is a sexual predator. My friend was alarmed at my word choice and to be honest so was I. I hadn’t thought of this man for many years and yet there was a virility to my language that came from somewhere deep and buried.”

Detailing the supposed misconduct, Lister-Jones recounted working in a nightlife venue owned by the actor in the ’90s, where he was “consistently sexually inappropriate with a fellow female promoter.” The actor said she soon landed a guest role on Law & Order and alleges the actor was “drunk on set,” sipping from a “22 ounce beer under the table” in between takes. “In one take he got close to me, sniffed my neck and whispered ‘You smell good,’” she claimed. “I didn’t say anything. My friend at the club never said anything. It’s so rare that we do.”

Acknowledging the other women’s allegations, the New Girl actor noted her own allegations “are small in comparison to the accounts of assault that have so bravely been shared today. But navigating predation at any level is a burden all women have to bear.”

In response to the allegations, Peloton deleted Noth’s viral advertisement referencing his And Just Like That... character’s ill-fated ride on the company’s exercise bike on Dec. 16. “Every single sexual assault accusation must be taken seriously,” a spokesperson told Deadline. “We were unaware of these allegations when we featured Chris Noth in our response to HBO’s reboot of the show. As we seek to learn more, we have stopped promoting this video and archived related social posts.”

Less than three months after signing on as a client, A3 Artists Agency dropped the actor on Dec. 17, Deadline reported. “Chris Noth is no longer a client,” a spokesperson for the agency told the publication, stopping short of directly connecting his expulsion to the allegations.

More like this
'GoT' Star Emilia Clarke Says She "Just Can't" Watch 'House Of The Dragon'
By Brad Witter
Here’s What Happens To Bill & Frank In 'The Last Of Us' Video Game
By Brad Witter
Andy Cohen Apologized To Larsa Pippen After A 'RHOM' Season 5 Reunion Dust-Up
By Brad Witter
Here’s Why Danny Masterson’s Hyde Isn’t In 'That '90s Show'
By Brad Witter
Get Even More From Bustle — Sign Up For The Newsletter
From hair trends to relationship advice, our daily newsletter has everything you need to sound like a person who’s on TikTok, even if you aren’t.

This article was originally published on Dec. 16, 2021