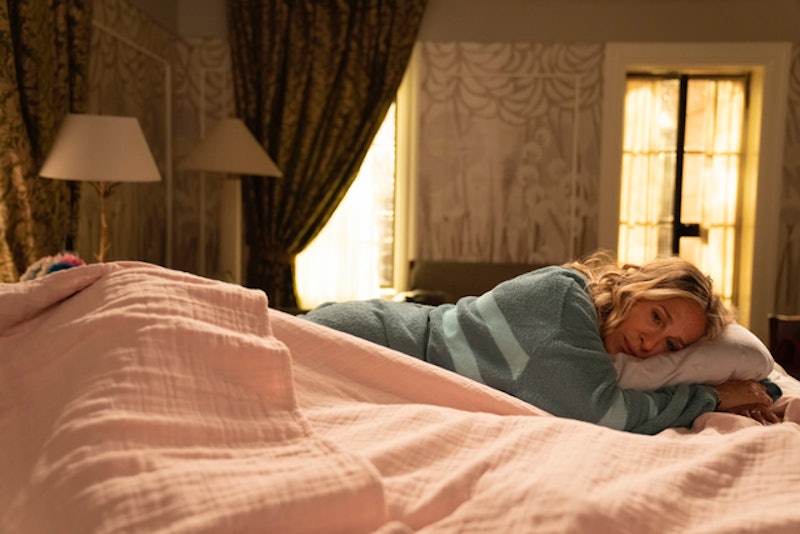 “It was always on the table, because I knew it was a significant new chapter,” King said at a press junket attended by Bustle. “I wouldn't have done [the reboot without Noth] because that storyline affects the entire series. All the characters are affected by that. And it creates a giant hole, as Miranda says in her eulogy, where he isn't.”

As reported by Yahoo, Noth was initially hesitant to sign on to And Just Like That. But after hearing King’s plan, he was sold. He even agreed to film a fake red herring scene at Big’s funeral to throw off fans who were tracking production’s every move. “I wrote a fake scene, and Sarah Jessica [Parker] and he put on costumes,” King explained. “He said, ‘You really want me to put a face of makeup on and come down and shoot a fictional scene at my funeral?’ I go, ‘Yeah, because I really wanted the audience to be as surprised as possible.’”

King added that in the original Sex and the City series, the crux of Carrie’s story was that she always wanted Big but couldn’t have him. “It was an interesting grist for her to grow through what she couldn't have, how it made her focus her life and develop as a person,” King said. He chose to kill off Big because he wanted to mirror that in the reboot. “Here we are again, and now it's the same thing. She can't have what she thinks she should have, which is Mr. Big. So what it's going to do is try to prove the thesis for what the series is about.”

He points to Carrie’s final voiceover in the original show as his guidepost: as she’s seen walking down the street talking to Big on the phone, she says that the most important relationship in your life is actually the one with yourself. “[The reboot] will be about the significant, challenging, emotional relationship that Carrie has with herself,” King said. “And also the evolution of somebody who's had love, what it does to you. What can you keep if it goes away and is it gone and is it better to have loved and lost than never to have loved at all?”