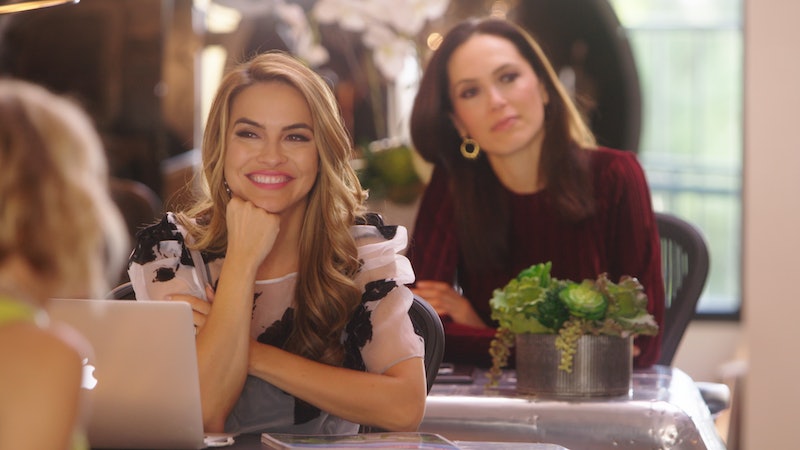 The Oppenheim Group headed to the ocean to celebrate on Sunday, Aug. 17, but the realtors are keeping the cause for their get-together to themselves for now. Still, fans are convinced Chrishell Stause teased Selling Sunset Season 4 in her latest Instagram post. Netflix hasn't announced a renewal for the reality series just yet, but Season 3 has generated major buzz on social media since it premiered on Aug. 7.

"Carpe Diem!! Celebrating good news we can’t tell you about," Stause captioned her weekend Instagram post, which featured herself and her coworkers Heather Rae Young, Amanza Smith, and Mary Fitzgerald enjoying themselves on a boat outing in Newport Beach, California, per E! News. Stoking renewal speculation further, she also included Selling Sunset and Netflix hashtags, suggesting that the cast's excitement has something to do with the series — and what would be more exciting than a Season 4 renewal?

In the comments, fans are expressing their hope that the post means new episodes are coming soon, although some commenters have an alternate theory. A surprising amount of people are wondering if the absence of Davina Potratz and Christine Quinn, who have been dubbed the show's villains, means they have left the Oppenheim Group. Stause hasn't responded to any of the theories yet, but she did post a series of videos from a photo shoot with her co-star Fitzgerald that appeared to take place at the office. In the videos, Fitzgerald says that they're both hungover, seemingly from their boat celebration.

During an Aug. 7 interview with Entertainment Tonight, Quinn said that if Selling Sunset is renewed for Season 4, then it won't film until December at the earliest. Season 3 ended with her wedding, which included a blow up between Stause and Potratz over Stause's divorce from This Is Us star Justin Hartley. For her part, Quinn has expressed a desire to move past the drama in a potential Season 4.

"I think it's going to be really interesting, because if we do shoot, it's not going to be until next year," she told ET. "I hear that production is pushing everything until late December, if not next year. So, I feel like this year will be good because it's giving everyone a chance to cool off and, like, heal the wounds that have been going on since season 3."

Given that most of the Oppenheim Group is hanging out together sans masks, it seems possible that Netflix may have opted to capitalize on the show's momentum with an early renewal instead. Between the "good news" tease and a photo shoot at the office, fans are likely right to surmise something is up with the Selling Sunset crew, but at least for now, Stause's lips are sealed.