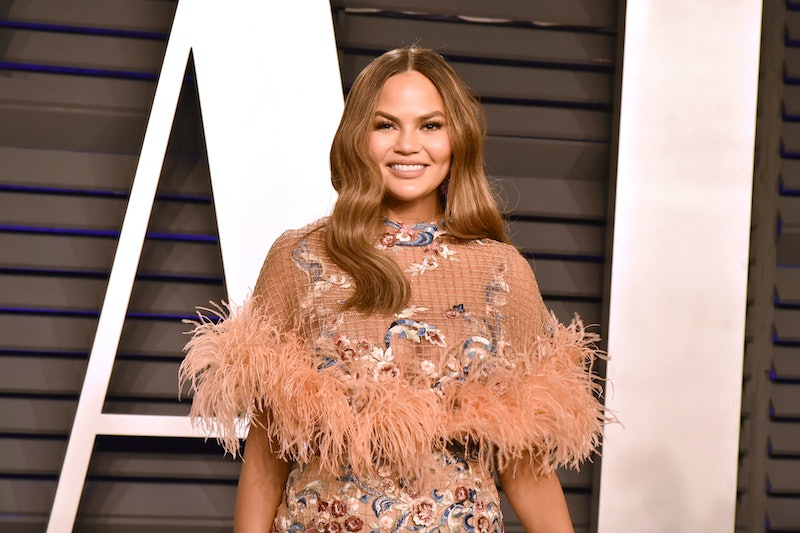 The Chrissy's Court star shared the video on Monday, June 6, hoping to answer fans asking her about her skin regimen — "I will admit I am def proud of my skin lately and feeling myself," she wrote. In addition to sharing the products that she uses in the caption of her post, Teigen also used the video to show off her bright orange eyeliner, explaining that she is "feeling the colorful eyeliner trend" despite being "very late" to take part in it.

However, instead of commenting on her routine or new makeup look, one Instagram user took to the comments to question Teigen's appearance, writing that either "this isn’t her or some app that changed her face." The commenter continued, "I had to look back and forth like 4 times... either she dropped 50 lbs overnight or has cancer... this isn’t right." In response, Teigen fired back, "what would you prefer?"

Despite earning a great deal of criticism in the comments of Teigen's post for their original comment, the Instagram user continued to question the former model, claiming that Teigen "looks like a completely different person" in the video and that she "did 2-3 double takes."

Though they later added that while they was sorry "for the lack of tact fullness" and "should have thought ahead," the commenter continued to ask Teigen about what they felt was a drastic change in appearance. "But, why did I have to go back and forth 3-4 x to make sure it was you? Is it an app?" the commenter wrote. "It's not about skincare, but bone structure is completely different...you're unrecognizable." After seeing the Instagram user's multiple posts, Teigen finally shut down the conversation, once and for all. "Why are you carrying on with this??" she responded. "Why do you think I owe you anything especially after what you've said? You know you don't actually know me in real life, right? Thank God."

Despite being nicknamed the "Mayor of Twitter" thanks to her hilarious, candid, and ubiquitous social media presence, Teigen has experienced a lot of the downsides of being so active on social media. "I’m definitely affected by it and I think it’s important for people to know that we read what they say and they’re not just typing out into this empty universe," she told Bustle of the negative comments aimed her way in July 2018. "We read it, or I do at least. I read everything. It’s a blessing and a curse." In other words, just because Teigen is the queen of the social media comeback, that doesn't mean she wants to spend her days putting rude commenters in their place.

More like this
Chrissy Teigen & John Legend Reveal Their New Baby’s Name & Share First Photo
By Stephanie Topacio Long and Jake Viswanath
Jameela Jamil Defends Sam Smith After Trolls Body-Shamed Them
By Jake Viswanath
Here’s How You Can Watch The Grammys 2023 In The UK
By Emma Madden and Catharina Cheung
Blake Lively Is Trolling Ryan Reynolds Again – Over Wrexham FC
By Sam Ramsden
Get Even More From Bustle — Sign Up For The Newsletter
From hair trends to relationship advice, our daily newsletter has everything you need to sound like a person who’s on TikTok, even if you aren’t.