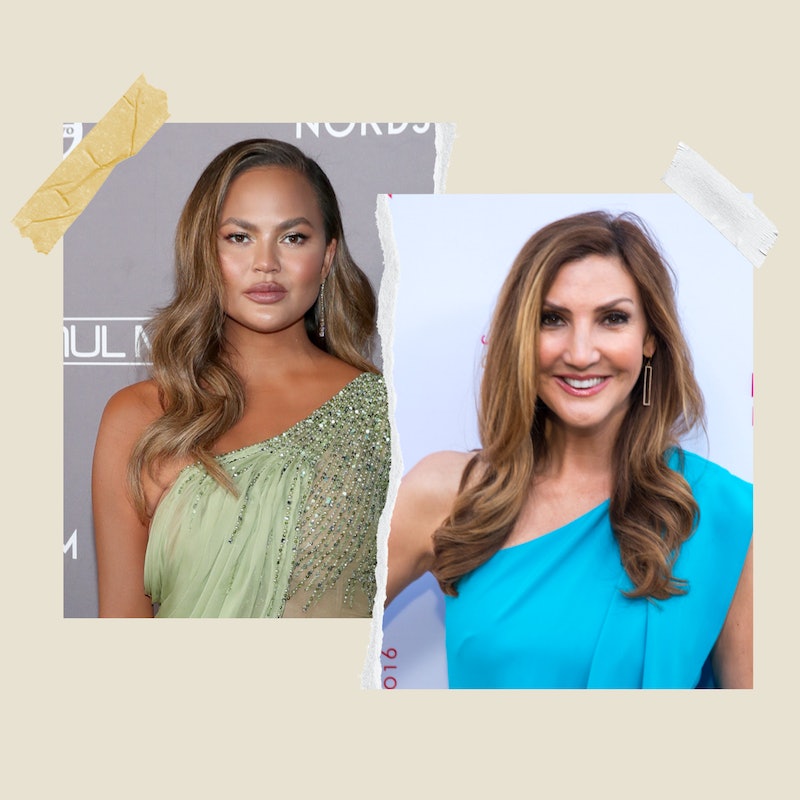 Another day, another celebrity feud. After Chrissy Teigen confessed that she doesn’t spend time “curating” her Instagram feed, comedian Heather McDonald slid into the comments of the Cravings author’s post and called her a “hypocrite.” It all started when Teigen shared a candid photo of herself with her eyes closed. “I really think you guys are too conditioned to seeing perfect photos all day because so many of my comments on any given photo are ‘why would she post this’ or ‘I love you girl but this is not flattering,’ to which I say, who cares??” the 35-year-old model wrote on Monday, Sept. 28.

The Lip Sync Battle co-host went on to say that she’s often asked by makeup artists and hairstylists if certain photos are OK to share, but she never has a problem with any of them. “My reply is always the same: I honestly don’t care,” she continued. “Post whatever. I dunno. I just don’t care about curating my Instagram to be perfection. I’m a mess, I’m chaotic and this shall always reflect that.” Unfortunately, McDonald wasn’t convinced that Teigen was telling the truth, and in a screenshot captured by TMZ, she called her out.

“These humble brags of ‘this is an unfiltered picture so say whatever mean thing you want so people will actually write nice things since I actually look great’ is so 3 years ago, Chrissy,” the 51-year-old comedian reportedly wrote. “You know what was curated, your Twitter.” Over the last several years, Teigen’s no-holds-barred tweets earned her a ton of attention online. And after taking a break from Twitter after her cyberbullying scandal this summer, Teigen returned to say that she felt “lost” without it and that she “desperately” wanted to come back.

In addition to commenting on Teigen’s post, McDonald reportedly called the cookbook author out on her Instagram Stories. “I cannot take it,” she wrote. “I’m just having one of those days where I had to point out the #hypocrite on IG. I can’t be the only one that can see through this BS.” Teigen, for her part, seemed to be bothered by McDonald’s comments, and she was especially sensitive to the comedian’s words because it also happened the be one year since her pregnancy loss.

“I didn’t sleep at all last night as John [Legend] can attest,” Teigen reportedly wrote in her Stories. “I was up sick, sobbing, as my phone popped up the memory of being in the hospital exactly one year ago, losing our baby. So maybe I’m a little sensitive today but f*ck off.” In a separate post, the 35-year-old pondered about why people keep tabs on people they don’t like on social media. “Why people follow people they hate is beyond me,” she added.

Teigen and McDonald’s feud went down shortly after Teigen reflected on the loss of her son Jack on Instagram. “To the son we almost had,” she wrote next to an image of her crying in the hospital with her husband at her bedside. “A year ago you gave me the greatest pain I could ever imagine to show me I could survive anything, even if I didn’t want to.” Later, she added that the grief was still there one year later. “They told me it would get easier but yeah, that hasn’t started yet,” she wrote. “Mom and dad love you forever.”

Despite later realizing that Teigen was going through a hard time, McDonald seemed to have doubled down on her comments. “I have no problem with her,” McDonald told TMZ after their back-and-forth on social media. The comedian also said that she didn’t know it was the anniversary of Teigen’s son’s death. “I certainly didn’t know that when I commented,” she wrote, adding that the model didn’t mention it in her initial post. “She said it hours later so that everyone would then be like, ‘I can’t believe Heather McDonald is such a horrible person to say something a little jabby.’”

McDonald went on to insist that her comment wasn’t even a jab and that she was simply “pointing out the obvious.” “We all have had horrible things in our lives, but I also think she’s very strategic about her social media that when she realized that she was like, ‘Wait a minute, let me just remind everyone to feel sorry for me in case they’re on Heather’s side and pointing out the hypocrisy of some of my social posts,’” she continued before imparting some words of wisdom. “Just be more authentic online and maybe you’ll do better,” she said.