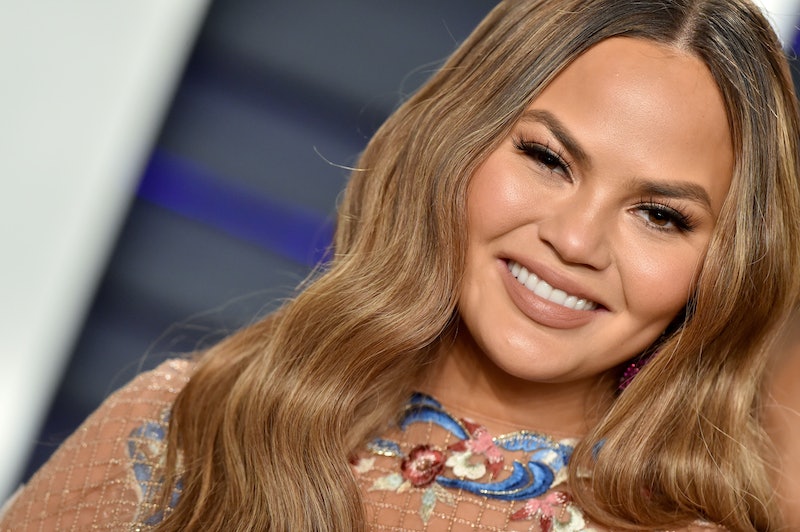 Chrissy Teigen isn’t even a little bit concerned with posting “flattering” photos on social media. On Monday, Sept. 28, the Cravings cookbook author took to Instagram to share a very candid shot of herself. In fact, the shot was so candid that her eyes were closed. Fortunately, sharing less-than-perfect pictures with her 35.3 million Instagram followers doesn’t bother her at all, and in the caption of her latest post, she revealed why.

“I really think you guys are too conditioned to seeing perfect photos all day because so many of my comments on any given photo are ‘why would she post this’ or ‘I love you girl but this is not flattering,’ to which I say, who cares??” Teigen, 35, wrote. She went on to say that she’s often asked by makeup artists and hairstylists if certain photos are OK to post, but she never has an issue with any of them. “My reply is always the same: I honestly don’t care,” she added.

“Post whatever. I dunno,” the Lip Sync Battle co-host continued. “I just don’t care about curating my Instagram to be perfection. I’m a mess, I’m chaotic and this shall always reflect that.” Teigen signed off by reminding her followers that she’s a Sagittarius, a zodiac sign known for being free-spirited, spontaneous, honest, and funny. “I see u sag sis,” Vanessa Hudgens commented, making it clear that she can relate.

Although Teigen doesn’t spend her time scrutinizing every photo that she posts on her feed, it’s fair to say that she’s had a complicated relationship with social media in the past. In March, the author announced that she was quitting Twitter because the environment had become too toxic. “For over 10 years, you guys have been my world,” she tweeted before deactivating her account. “I honestly owe so much to this world we have created here. I truly consider so many of you my actual friends.”

In a few additional tweets, Teigen said that it was time for her to “say goodbye.” “This no longer serves me as positively as it serves me negatively, and I think that’s the right time to call something,” she added, explaining that her “life goal is to make people happy.” “The pain I feel when I don’t is just too much for me,” she continued. “I’ve always been portrayed as the strong clap-back girl but I’m just not. My desire to be liked and fear of pissing people off has made me somebody you didn’t sign up for, and a different human than I started out here as.”

Just over three weeks after “quitting” the platform, Teigen returned with a lengthy thread explaining what brought her back. “Turns out it feels TERRIBLE to silence yourself,” she tweeted. “And also no longer enjoy belly chuckles randomly throughout the day and also lose like 2000 friends at once lol.” In a separate tweet, she wrote that she decided to “take the bad with the good.” However, when she found herself embroiled in a high-profile bullying scandal in May and June, she took another social media break.

Since the scandal went down, Teigen has not made her grand return to Twitter. However, she has been posting on Instagram rather frequently, and yes, her posts are chaotic. “John [Legend] gave me 10 minutes to shop because we are late for the airport,” she wrote on Sept. 27 alongside a video of her frantically sorting through clothing racks in a sports bra. “Also when I go shopping I like to wear bike shorts and a bra so I can try sh*t on quick lol try it sometime, everything looks better.”