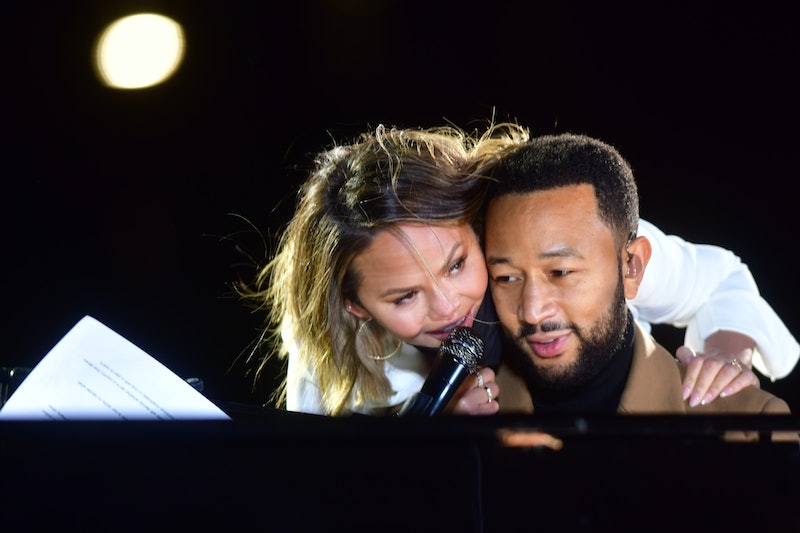 One of Hollywood's most beloved celebrity couples is turning their grief into hope by helping families that have struggled with pregnancy loss. Speaking to Good Morning America on Tuesday, Nov. 24, Chrissy Teigen and John Legend gave their first interview since losing their son Jack in September. On the morning show, the couple opened up about their grieving process and what it was like sharing their story with the world instead of hiding away.

"I definitely give myself permission to have complete and utter grief," Teigen said. "Every day is so different, so when people ask me how I'm doing, I always say, 'I'm okay, today.'" Legend, for his part, said that sharing their sadness with the world has been unexpectedly cathartic. "I didn't know that we could experience this grief and also share it, but when we did, it really meant so much to so many people and it was such a powerful experience for me to learn that," he said. "I'm just grateful that my wife was courageous enough to do it."

In September, Teigen announced that she and Legend had lost their third child by sharing emotional photos taken from the hospital on Instagram. In a Medium essay that she wrote in October, the Cravings cookbook author went into detail about their pregnancy loss, documenting the medical problems she faced and revealing how her family said goodbye to baby Jack. "My mom, John and I each held him and said our own private goodbyes, mom sobbing through Thai prayer," she wrote. "I asked the nurses to show me his hands and feet and I kissed them over and over and over again."

The letter also addressed the backlash that Teigen faced for posting the photos, which some critics felt were too shocking and inappropriate for social media. She added that even Legend was uncomfortable taking the photos, and on GMA, she addressed the criticism again. "I don't care if you were offended or disgusted," she said, emphasizing that they were posted "for people who were hurting" after experiencing a similar loss.

Legend, who was concerned about documenting such a painful moment, ultimately changed his mind. "I was worried, I was like, 'I don't want to commemorate this pain,'" he said. "The crazy thing about having a miscarriage is that you don't walk away with anything. You have this emptiness, and we wanted to take the photos so we had something to remember."

Now, the couple is using their grief as motivation by partnering with Ronald McDonald House Charities to assist families with sick and injured children in need. "What they're doing is so incredible and so beautiful, and I am so proud to support it," Teigen told GMA. She also expressed how thankful she is for the "thousands of letters" she received after being so vulnerable about the experience online. "Obviously, it's so painful to go through something like this as a woman, something that was inside your body that you were nurturing and taking care of," she said, "but obviously there's a father involved, and the support for the both of us has been so beautiful, so incredible."