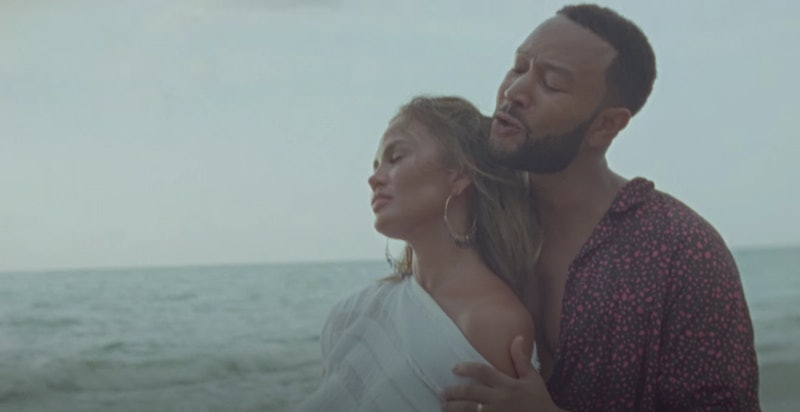 America's favorite family might be getting a new addition. Fans are convinced that John Legend and Chrissy Teigen are expecting baby number three after the release of his new music video, "Wild." Neither the singer nor the model/cookbook author/Twitter queen have officially confirmed the news, but sources close to the couple confirms to Bustle that Teigen is, in fact, pregnant, as suggested by the teasing belly shot at the end of the video. Whether or not it's really a very slight baby bump remains to be seen (all you can see in the shot is Legend and Teigen's hand on her belly, but they could just be doing the prom pose). Bustle reached out to reps for both Teigen and Legend.

Legend dropped his new music video on Thursday, Aug. 13, after a family YouTube live session. And while the couple didn't announce any pregnancy news before the video premiere, looking back, they definitely hinted at how much the "Wild" video meant for their family. "It's been chronicling our family's growth and our journey," Legend said, reflecting on Teigen's past appearances in his music videos (they met on the set of his video "Stereo"). "And we're so happy that this video is the next chapter." Of course, he could have been referencing the fact that their son, Miles, 2, is making his music video debut in "Wild," appearing alongside his big sister, Luna, 4. But, the "next chapter" tease certainly takes on a different meaning when you see the video.

Another hint that the two are expecting baby number 3 is in Vevo's tweet announcing the video's debut, which told fans to "watch it now for a beautiful surprise!" Plus, in his own tweet about the video, Legend used five heart emojis, which could be a sign that their family of four is going to be a family of five very soon. But, it's still hard to tell if *the* shot is really a baby announcement:

Could be a bump...but it also could just be Teigen's natural curves and a trick of the light. (Remember, no person, not even a supermodel, has a completely flat stomach.) Meanwhile, as fans wait for an official announcement, they've taken to Twitter to celebrate the potential happy news, and to search for answers.

Teigen has hinted about wanting to have a third child in the past, though she's never revealed any concrete plans. Responding to an Instagram comment under a photo she shared of herself, Luna, and Miles in 2019, she said that she was "gonna try to wait a few years before trying again. These guys are exhausting!" One year earlier, in 2018, just after Miles was born, Legend revealed that he thought they might like to have another child in the future. "We can do three," he told the Big Boy's Neighborhood podcast at the time.

This article was originally published on Aug. 13, 2020