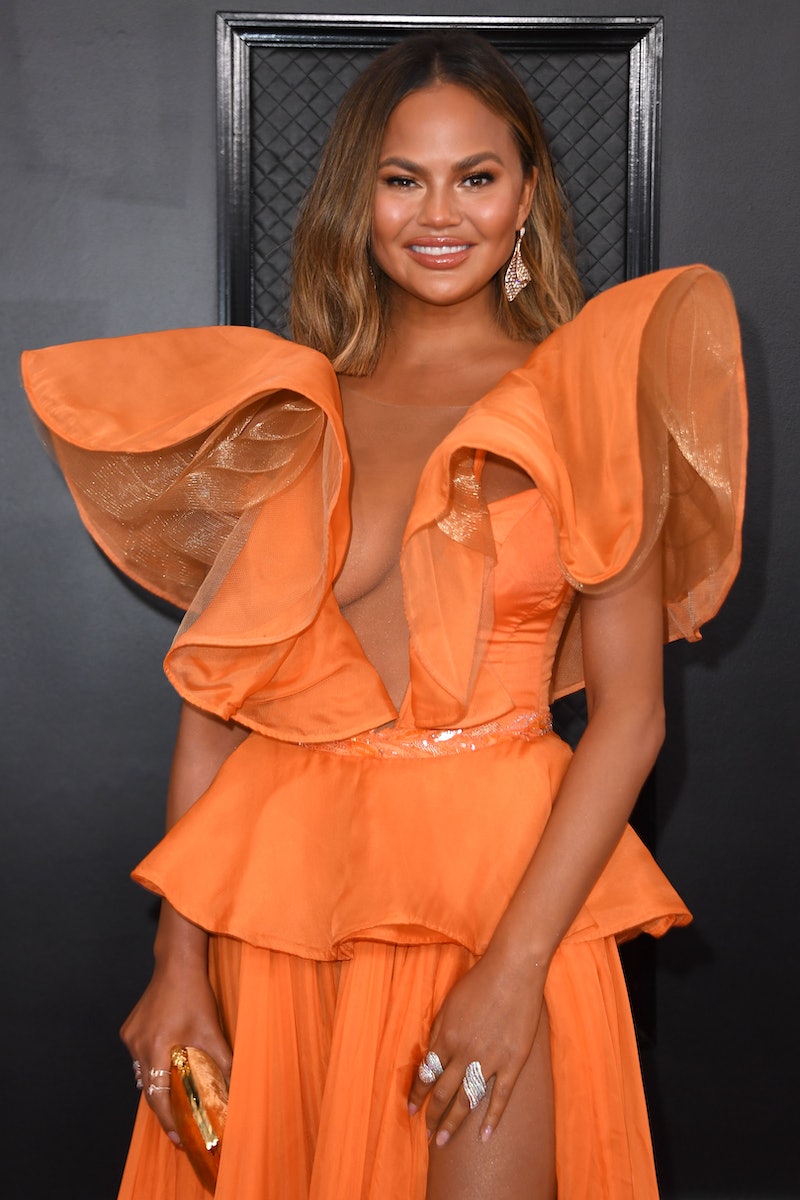 The inauguration of Joe Biden was meaningful for so many Americans, but Chrissy Teigen shared a particularly poignant moment after the new president was sworn in. In an emotional post shared on Twitter, Teigen reflected on experiencing the inauguration sober following her December announcement that she gave up drinking. The cookbook author traveled to Washington D.C. with her family to celebrate John Legend's performance, and she opened up about her sobriety alongside a photo of her family on the steps of the Lincoln Memorial.

"[We] ran our asses up the stairs for this shot," Teigen captioned a picture of her, Legend, and their children, Luna and Miles, gazing out toward the Washington Monument as the sun set. "[It's] just incredible to be here. sober. I know that's weird but it's like ... a different world for me. everything is new and better." She also added that she was "very happy" to get to experience such a historic moment with her loved ones, "the most happy. Very bigly happy."

On Dec. 29, Teigen revealed on Instagram that she was "four weeks sober" after she was gifted Holly Whitaker's book, Quit Like a Woman: The Radical Choice to Not Drink in a Culture Obsessed with Alcohol, for her birthday. "I was done with making an ass of myself in front of people (I'm still embarrassed), tired of day drinking and feeling like sh*t by 6, not being able to sleep," she explained before recommending the book to all of her followers.

Teigen has long been open about her relationship with alcohol, telling Cosmopolitan in 2017 that she was "point blank, just drinking too much" and needed to reevaluate things. "I got used to being in hair and makeup and having a glass of wine," she explained to the outlet. "Then that glass of wine would carry over into me having one before the awards show. And then a bunch at the awards show. And then I felt bad for making kind of an ass of myself to people that I really respected."

Describing herself as someone who "can't just have one drink," Teigen added that people in her life assumed she was fine because she didn't appear to be sick the morning after. "Nobody really brought it up to me," she said. "[But] I knew in my heart it wasn't right. It makes you very short with people. People think it's cutesy and fun to go on these boozy brunches, but there's more to it."

While she noted at the time that she wasn't sure if she was ready to "go totally sober," Teigen was aware that she needed to make a change for quite some time. "I used to think it was kind of nutty to have to go totally sober but now I get it," she said. "I don't want to be that person. ... I have to fix myself."

In addition to commemorating her moving moment at the Lincoln Memorial, Teigen chronicled her trip to D.C. on Twitter — and even got in trouble for sharing footage of Legend's rehearsal before his performance. However, the biggest moment for the Lip Sync Battle host came when Biden followed her on social media, marking the first time that she has been able to see the president's posts in years. "My heart oh my god," Teigen wrote. "I can finally see the president's tweets and they probably won't be unhinged."