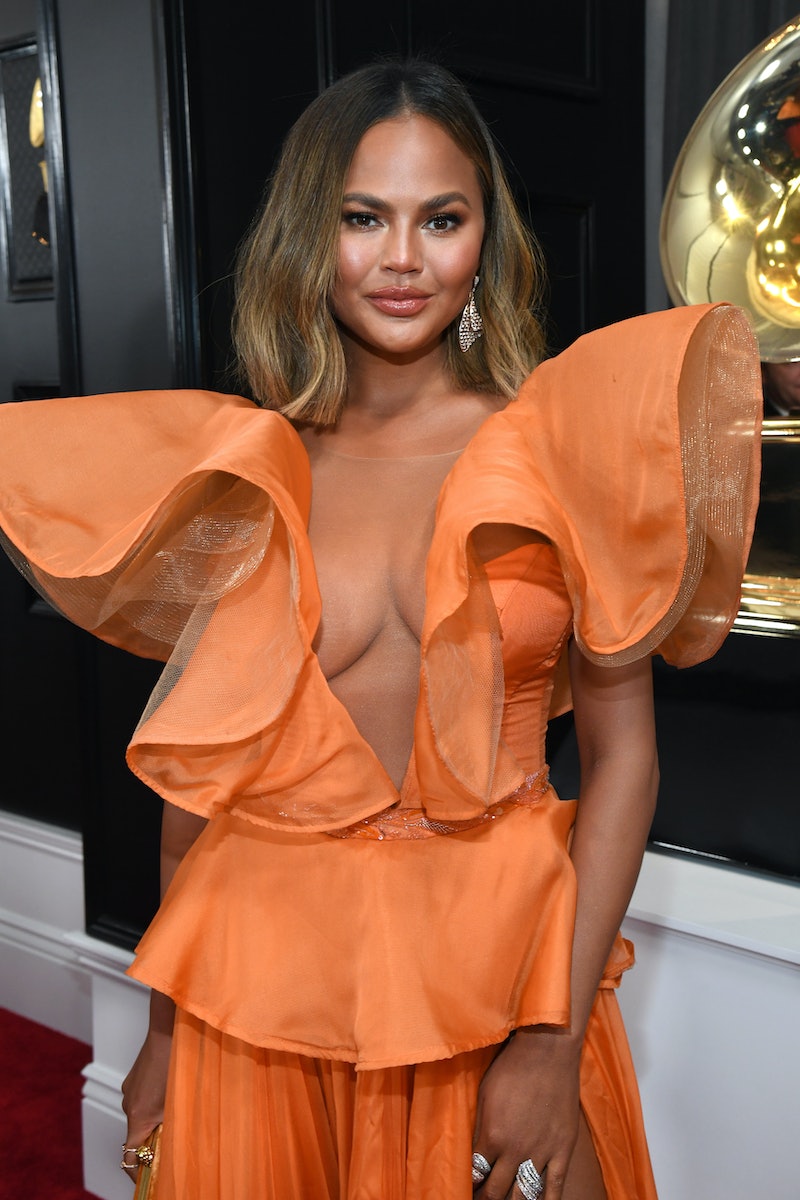 Two months after the loss of her third child, Chrissy Teigen still has a physical reminder of the heartbreak. In an emotional Instagram post on Dec. 23, Teigen opened up about the remaining bump after her pregnancy loss, explaining that she has a complicated relationship with her body and the constant reminder of "what could have been." The cookbook author and her husband, John Legend, revealed that they lost their third child in October — a boy they had named Jack — after months of complications.

"This is me and my body, just yesterday," Teigen wrote alongside a current photo. "Even though I'm no longer pregnant, every glance in the mirror reminds me of what could have been. And I have no idea why I still have this bump, honestly." Although she said it's "frustrating" that it's still there, the model noted that she was still "proud" of her body and everything it has been through.

"I love being pregnant, so so much, and I'm sad I never will be again," Teigen continued. However, she feels fortunate to have her two children — 4-year-old Luna and 2-year-old Miles — and is focused on finding joy through her relationship with them. "I am lucky to have two amazing little ones who are transforming into big little people more and more every single day," she wrote.

Teigen has been very open about her grief after the loss of baby Jack, even posting an Instagram Story of her "post-therapy face filter" on Dec. 22, which showed her crying. "You learn how to cope with it," she told People in November about the healing process. "I am very proud to say that there's multiple different therapies I'm using to hopefully become the same person that I was, and I'm okay with that. I'm okay with allowing myself to have bad days and good days."

The author later added that all of the love from Legend and their kids has helped her carry on. "I have these two toddlers running around that need me and need me to be happy and give them hugs all day," she said. "I have a husband that needs love. I have people that just take such good care of me, and we're all going to get through this together."

A few days later — after admitting that she was in "a grief depression hole" — Teigen offered another hopeful update on Instagram. "When I'm old and grey, I will look back on the last two months as being brutal, exhausting, sad, physically challenging, mentally painful b*tches of a couple months," she wrote, adding that she was determined to find joy where she could. "I already see the leaves as orange instead of grey, realized the sky is indeed blue and not black ... anyhow the point is, f*ck, I think it's happening."

Legend told Entertainment Tonight in November that he is also attempting to focus on the "love" that he and his family have for one another. "Whenever we go through personal challenges ... I think we have to hold on to what makes us optimistic," the singer explained. "And in my family, as we've gone through a tough year, we hold onto the fact that we have two beautiful kids that we love and are such a beautiful reflection of who we are and what we value."