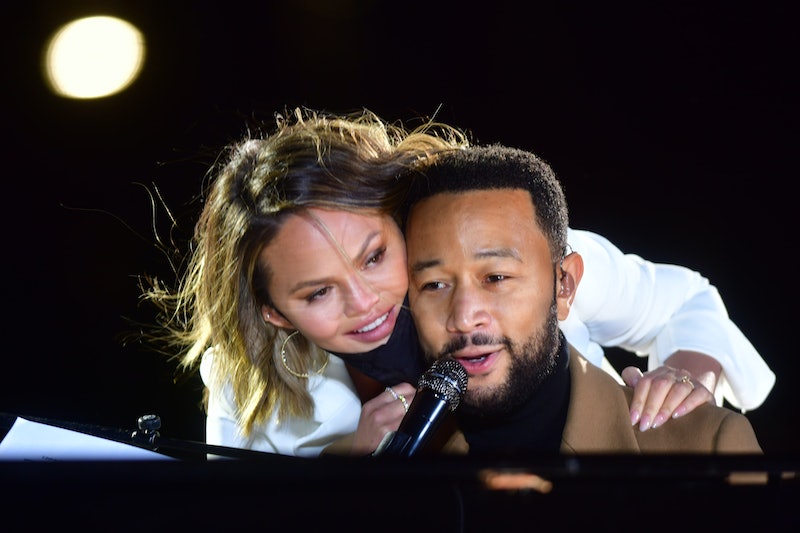 Despite experiencing a devastating loss in September, John Legend and Chrissy Teigen are determined to find hope in the midst of heartbreak. In a recent interview with Entertainment Tonight, Legend revealed how he and Teigen are coping with the loss of their late son Jack, explaining that they are focusing on all of the love and support they have in their lives at the moment.

The couple — who are also parents to 4-year-old Luna and 2-year-old Miles — revealed on Oct. 1 that they lost their third child, a baby boy named Jack, at 20 weeks. When the outlet asked the singer how he and his family continued to push forward in the face of pain and heartache, Legend was extremely honest. "Well, I think we have to," he said. "Whenever we go through personal challenges ... I think we have to hold on to what makes us optimistic. What makes us hopeful, hold onto the things that bring us joy."

For Legend and Teigen, that means finding hope and joy in their family, friends, and loved ones — particularly in Luna and Miles. "And in my family, as we've gone through a tough year, we hold onto the fact that we have two beautiful kids that we love and are such a beautiful reflection of who we are and what we value," he explained.

Legend also revealed that the outpouring of love and support his family has received from the public has helped them find peace. "We've heard from so many people who have gone through it too and it's been encouraging to be getting so much love and support from so many people who have experienced similar things," the singer said. "Chrissy sharing what she shared has also been helpful for other people who are going through it and may go through it in the future. So thank you."

The fact that Teigen's posts about her pregnancy loss have reached so many people is especially touching considering the criticism she faced after sharing photos from her time in the hospital. "I cannot express how little I care that you hate the photos," Teigen wrote in a Medium essay in late October. "These photos aren't for anyone but the people who have lived this or are curious enough to wonder what something like this is like. These photos are only for the people who need them. The thoughts of others do not matter to me."

The people who did need those photos, however, made their support clear in the weeks after Teigen and Legend lost their son. "For weeks, our floors have been covered in flowers of kindness. Notes have flooded in and have each been read with our own teary eyes," she wrote. "Social media messages from strangers have consumed my days, most starting with, 'you probably won't read this, but…'. I can assure you, I did."

In addition to gaining strength from others who've experienced the same pain, Tiegen explained that her being so open about her loss will help her family remember Jack. "Our house is very open about life, death, grief, everything really," she wrote on Instagram alongside a video of Luna placing gifts next to Jack's ashes. "We try to explain things well and answer every question imaginable in a beautiful, spiritual but literal way. ... I miss u, jack. we miss you a lot."