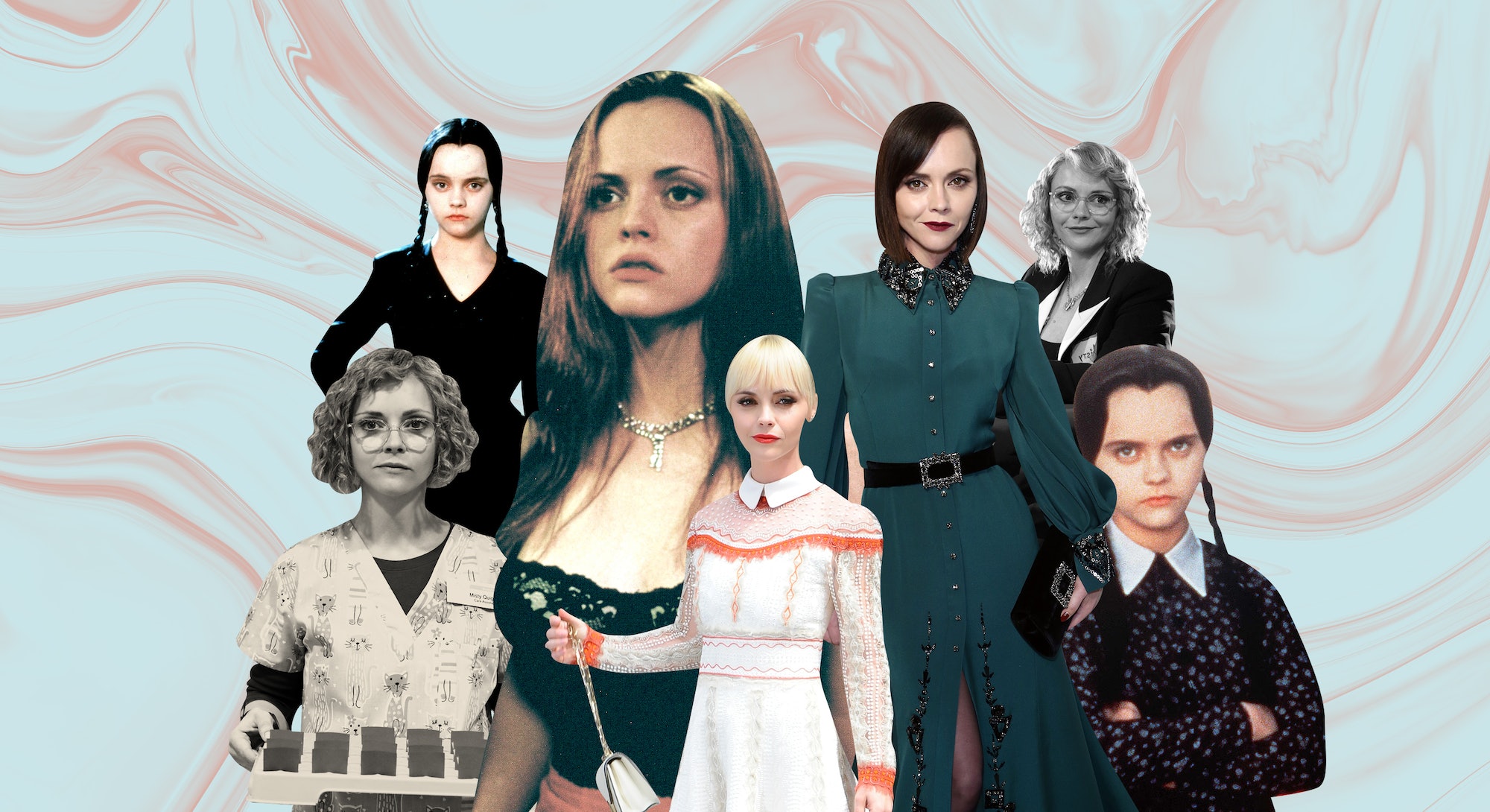 There are two words that have come up so often in Christina Ricci’s 30-year career, they’ve become an inside joke between her and her agents. When she doesn’t book the part, it’s because she’s “too specific.” Meaning the slight, doe-eyed actor who brought Wednesday Addams, Casper's Kat, and Sleepy Hollow's Katrina to life is so singular, so synonymous with those oddball heroines that casting directors find it difficult to see her as anything other than her typically sardonic, often sinister on-screen personas.

It wasn’t always this way. Child stardom came easily to Ricci — she was scouted in second grade by a theater critic and soon after was starring alongside Cher and Winona Ryder in the 1990 film Mermaids. But Hollywood’s qualms with her “specific” quality soon cast a shadow over the ingenue era of her career. “I was not traditionally a pleasing young woman and those are the things that get you cast in movies when you're young,” Ricci tells Bustle from Los Angeles, where she’s nesting with her one-month-old daughter, Cleopatra. While female actors often fear growing older in the traditionally ageist film industry, Ricci longed for it. “Women of a certain age are allowed to be frightening. They're allowed to not have to always be focused on being appealing to men and audiences. I just knew that, as I got older, once that sort of pressure went away, I would be more acceptable.”

Enter Yellowjackets’ frighteningly unappealing Misty Quigley. The show has a classically Ricci off-kilter premise — it centers on a high school girls’ soccer team in 1996 who may or may not turn to cannibalism while stranded in the wilderness following a plane crash — but this time around, mainstream audiences are finally ready to embrace her brand of bizarre. And how could they resist? Ricci is so transcendently twisted as the grown-up version of Misty, the team’s frizzy-haired former equipment manager and perennial lone wolf, that even the character’s borderline sociopathic tendencies have a hint of pathos and screwball sensibility. Though meta casting is one of the show’s strengths — ‘90s teen queens Juliette Lewis and Melanie Lynskey also star — it’s Ricci who’s reaping the benefits of the media’s eagerness to reclaim once-maligned, now-nostalgic figures. Or as Twitter put it: “The Christina Riccissance is alive and real.”

Ricci as Misty in Yellowjackets (L); as the titular character in Penelope (R).

In the “murderous golden retriever” Misty, Ricci has found a worthy vessel to channel her own latent rage. While Misty’s anger is born out of her inability to fit in (“She's not cool. She's not pretty. She doesn't have an easy time socializing,” Ricci says), her own comes from a lifetime of pressure to conform in the public eye. “It was really hard,” Ricci says of her attempt to transition from teen roles to leading ladies. “I was pressured, and I put pressure on myself starting in the year 2000 to be more traditional.” Surrounded by girls-next-door-with-star-power like Gwyneth Paltrow, Cameron Diaz, and Julia Roberts dominating the box office, she felt like an outcast. “I changed the way I looked, and I tried to change the way I presented myself, and tried to do movies that were more mainstream.”

Yet rom-coms like The Sweetest Thing and Shallow Hal were the antithesis of the morose indies Ricci found herself booking. Films like Penelope (2006), which required her to wear a prosthetic pig nose; Monster (2003), in which she played the lover of Charlize Theron’s queer prostitute-turned-serial killer; and Prozac Nation (2001), her star turn as the pill-popping and pill-of-a-personality memoirist Elizabeth Wurtzel. “The message was I had to be in some sort of romantic comedy. I had to be in comedy. I had to figure out how to succeed by being more like my peers, I guess. But it didn't work. I actually think it was a detriment to my career.”

“Women of a certain age are allowed to be frightening. I just knew that, as I got older, I would be more acceptable.”

The aughts also brought Ricci a steady stream of television work: as a recurring character on Ally McBeal; an arc on Grey’s Anatomy. But the timing predated our prestige TV renaissance, and the parts available for women weren’t the thorny, nuanced characters that Big Little Lies, Sharp Objects, and now Yellowjackets have afforded female actors of a certain age. At the same time, she was also working the convention circuit, attending events like Comic-Con, where her specificity was actually celebrated. “I started to see how much people really loved the characters that I have played that were not normal and were not traditional,” she says. “I started thinking, ‘Why am I trying to make myself round when I'm clearly square?’ I started to lean in and embrace the kind of actress I am.”

Yellowjackets, Ricci notes, is the first example of that effort. Much like Ricci herself, the show does not have the traditional trappings of a mainstream hit: it eschews the ever-popular bingeable model for a classic weekly release schedule, and takes a bloodied and brutal approach to the portrayal of its teenage protagonists. Yet despite the odds stacked against it, Yellowjackets has been deemed the “buzziest show on TV,” with Ricci being labeled the series’ “venerable scene-stealer.”

But Ricci shrugs off any mention of her newfound success. At 41, she knows her specificity is an asset — it’s Hollywood that’s finally hip to it. “It can't really hurt that much,” she says now of that too-common piece of audition feedback. “To know that I was unique and if I did something, it was different than the way other people did it. Art has a lot to do with who you are inside, so I can't change that much.”