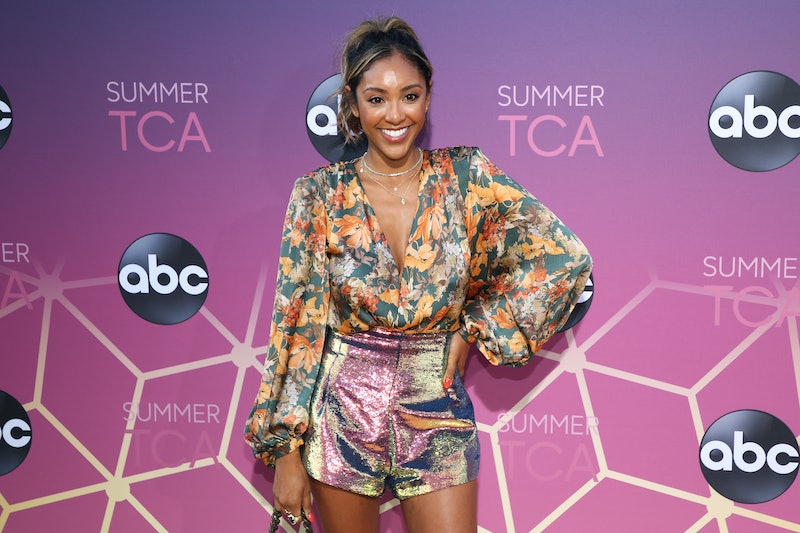 Tayshia Adams is reportedly looking for love on the upcoming season of The Bachelorette, but it was another leading lady who inspired her to join the franchise in the first place. During the August 31 episode of The Bachelor: The Greatest Seasons — Ever!, Tayshia Adams said Rachel Lindsay's Bachelorette journey gave her "hope" that she would one day find her own happy ending on the long-running franchise. The former phlebotomist was joined by Bachelor contestant Natasha Parker — who appeared on Peter's 2020 season — to reflect on the ways that Rachel's tenure as the first Black Bachelorette inspired them.

"I felt like every time I saw Rachel on the screen, she just had just the biggest smile," Natasha told Chris Harrison, after revisiting Rachel's time competing on Nick Viall's season of The Bachelor. "She was always just giving it her all. And I think the fact that she got the first impression rose, it kind of gave her that confidence to really go through this thing and see if this is really her person. I saw that every single time I saw her on screen."

Tayshia echoed those statements, adding that it was inspiring to see someone she related to on such a popular TV franchise. "I'm from Orange County, California, OK? So, this is my world," she explained. "And what I mean by that is I am very used to being the minority. And so seeing someone on TV have such a strong role and identify with me, [that] meant so much."

"It was really cool to see that Nick was so open to meeting her family," Tayshia continued, before revealing that seeing Rachel take him to church with her family during their hometown date "resonated" with her when she watched it at home. "He was out of his comfort zone ... but he really embraced it, and I loved that she did exactly that. Because that was her. That is what is going to be their reality outside of the whole thing."

While she didn't end up with Nick at the end of his season, Rachel went on to be the Bachelorette, where she ultimately found love with her now-husband, Bryan Abasolo. Both Tayshia and Natasha revealed that seeing Rachel as the Bachelorette — and feeling like they were finally seeing someone like them get the happy ending she deserved — is what inspired them to audition for The Bachelor themselves. "I think that's what encouraged me to go on it," Tayshia said. "Because I feel like she was so true and authentic to herself and, at the end of the day, she got her person. She is happily married now, and she got her fairy tale ending, and that's what I wanted. So, she gave us hope."

In addition to making history in 2017 as the first Black Bachelorette, Rachel has continued to fight for more diversity on the Bachelor franchise, and has frequently called out the show for its lack of racial equality. Back in June, Rachel told Page Six that she was "embarrassed" to be associated with the franchise because their continued lack of diversity in casting both the leads and contestants. "When I look at what’s happening in our country, and then I look at the franchise, I can’t continue to be affiliated — it’s embarrassing honestly at this point — to be affiliated with a franchise who is not on the right side of this," she said.

Not long after Rachel publicly called out the franchise, Matt James was announced as the first Black Bachelor. And in August, multiple outlets reported that Tayshia would take over from Clare Crawley as the next Bachelorette, making her the second Black Bachelorette in franchise history. "When I stepped in as Bachelorette, I wanted to pave a way for more diversity, for more people who look like me and who didn’t look like the typical lead. So to see another Bachelorette of color, I’m thrilled," Rachel told Entertainment Tonight about the Tayshia rumors. "I have been fighting for inclusion, and I‘ve said before that Tayshia would be an excellent Bachelorette, so I am more than happy to pass the torch."